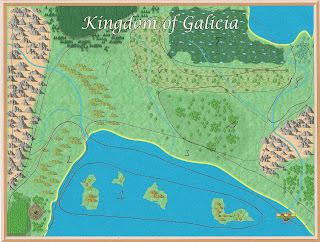 Now that I have the rough terrain worked out for my Kingdom, it's time to work out where people live and HOW they live.  Following the World Builder's Guide the first thing we need to work out is the basic subsistence systems of the Kingdom.  Now, since the Kingdom is fairly large and contains a variety of terrain, there's going to be a number of such systems in place.  First thing I do is print out a copy of the map are mark off various areas of the Kingdom--I figure this Kingdom has 10 distinctive regions, which is a bit on the high side for the WBG (it recommends 1-10 for a Kingdom), but it fits with what we have.

For the sake of convenience  I've labeled them as numbers.  Obviously I'll need to come up with cool names for these place, but for now we'll stick with numbers.

Area 1 is the islands to the south
Area 2 is the hilly and heavily forested west
Area 3 is the main coast line
Area 4 is the lightly forested plains
Area 5 is the swampy north
Area 6 is the scrub lands
Area 7 is the hilly and barren grasslands of the west
Area 8 is the richly watered river lands of the east
Area 9 is the low mountains of the east
Area 10 is the major mountains of the west.

Each one of these is going to have their own subsistence systems, and therefore their own population densities.  In fact, I can see the coast line and the river system in the east being fairly heavily populated, while others are fairly sparse if not abandoned all together.  The tables in the WBG will help me determine not only the main economic system of the area, but also it's general population density.

1 survives by trade and industry.  I see this as heavily settled area, probably dominated by the Fairians. (High population)
2 got an odd roll--Banditry and Brigandage   Not what what I was expecting, so rolled again on a different chart--same result.  This could be an area fallen to chaos, an area currently under conquest--perhaps the center of the Orc/Galt war?  Or, it just might be a land dominated by fiercely independent lords who spend most of their time battling each other. (Low population)
3 is Grazing/Herding.  (Average)
4 is Forestry (Low)
5 got industry.  I have no idea how a distant cold marsh land could sustain any sort of industry, but it's certainly more interesting than my initial idea of "eh, let's stick the goblin there."  Right now I'm thinking a combination of peat cultivation and liquor distilling, but I'll need to do some more research on these kinds of terrain before I make my final decision.  (Sparse)
6 is light agriculture (Low)
7 is heavy agriculture.  This has flipped my initial assumptions, as I assumed this would be a relatively empty area, but it looks like 7 will be the heartland of Galicia. (Average)
8  is also heavy agriculture, which makes for a nice, divide kingdom (Average)
9 is herding and grazing (Sparse)
10 I rule is relatively empty, aside from the handful of mining operations.  It is the realm of Dragons and Orcs, who spend their time raiding the humans to the East and looting the ancient Dwarf strongholds. (Sparse)

Using the information on population density, I place the major urban areas of the Kingdom about--at this point just cities and major towns.  I also start naming some of the areas--I combination of German, English, Fantasy gibberish, and my own whim.  Here's how the kingdom looks now: 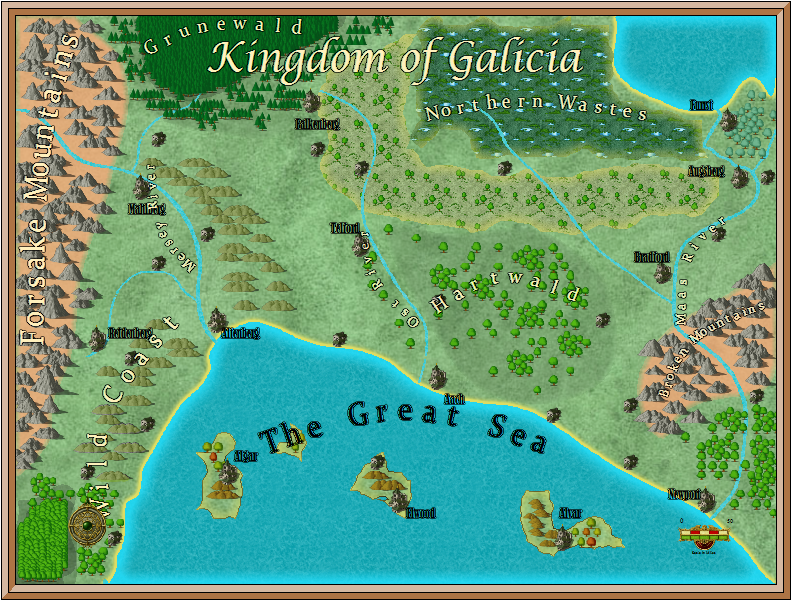 Gotta admit, I'm rather proud of how it's turned out.  Next I could either focus on the Kingdom--detailing the King, his top nobles, major players and the like.  Or, I could zoom down further to the playable area.  I think I'm leaning in that direction right now.