Now that I have a fairly decent idea on what the local area looks like.  I move on to placing a few lairs and monsters.  Much like the towns and kingdoms, the The Worldbuilder's Guidebook includes some very nice handouts for detailing individual lairs.

I have a few ideas for specific areas.  First off, I've placed the dragon, and I'm not sure what to do with her. My initial plan was to have her trying to establish her first hoard/nest, and I decide to go with that.  I decide that there is a ruined Elven temple in the area, full of mystery and treasure.  The dragon does not wish to go there herself, and so instead has dominated the local goblins to find it and loot it for her.  Why doesn't she want to go there?  For now, I'm going to say that within this temple lays an ancient Elven hero--buried with her is a powerful dragonslaying sword.  While the weapon is buried and lost, it's energies keep the dragon away.  Besides, she is more interested in actually building her lair proper, and so has delegated the "getting the loot" to the goblins.

As an aside, I wanted to do something with coinage in this Kingdom.  I decide that copper and silver are the common coins of the real, with gold being far rarer.  Electrum and Platinum, on the other hand, are far more ancient, and the coins of the Elven Empire.  The electrum coins were common, and still fairly well used--they can be melted down to extract their gold and silver.  Platinum is far rarer, and is unknown to most people.  Only collectors and wealthy merchants would have use for these.

Also, this area as a whole is relatively specie poor--most trade is handled by barter and long standing ties and relationships.  The only sources of hard currency are from the Galts in Landsberg or the loot taken from Elven and Gnomic sites.  Landsberg provides copper and silver, the ruins provide electrum.

I also include a Druidic Circle on my map--while not an evil place, these ancient clerics are neutral and continually under threat.  They have little love and less trust for outsiders, but are the most ready source of magic and healing in the area.

I also include a Shambling Mound Nest--a particularly wet and vile part of the swamp full of these horrible creatures.  They have been slowly spreading southward, attacking the Mossmen, who find themselves ever in more need of their human allies.

As part of the idea that the Elven religion, with it's focus on ancestor worship  is views by many as one step away from necromancy, I decide to include an actual necromancer.  He's a Fairian (actually a half elf) who is obsessed with restoring the Elven Empire.  He is technically an ally of the Baron, who has been granted his own estate along the Maas River.  He too is secretly hunting for the Elven Ruins, in pursuit of the ancient scrolls and books that still exist there.  Also, he is most likely supporting another adventuring party, who could end up being allies, rivals, or enemies of the PC's.

Finally, I can't have a bog without some good horror tropes.  I decide on two--one is based off Johnny the Homicidal Maniac and the other on "An American Werewolf in London."  The first is a small farmstead near Loch Fen--the family was brutally murdered by a roving band of theivs some time ago, killing all but the youngest, Johnny.  The poor young man has been on his own ever since.

Unbeknownst to all, the thieves never existed.  In the cellar of the house lives a horrible Living Wall, a monstrous creation of dead flesh.  It consumes all around it, drawing in even the buried dead.  The Wall spoke to Johnny, urging him to feel it.  He believes that if he does not, the vile thing will burst fourth and consume the world.  He murdered his family to satiate the monster, and now hunts the area for more sacrifices.  Most of his attacks are explained away as the work of goblins.

Secondly, there's Reid.  A long time resident of this land, he seeks his nephew.  The young man was bitten by a werewolf a few months ago, and fled his village.  While he hasn't killed anyone yet, his attacks are growing more violent.  Reid attempt to confront and help the boy, but lost his leg when he changed.  He is seeking someone to help him find his nephew and bring him to his home (in a ruined watchtower) safely. 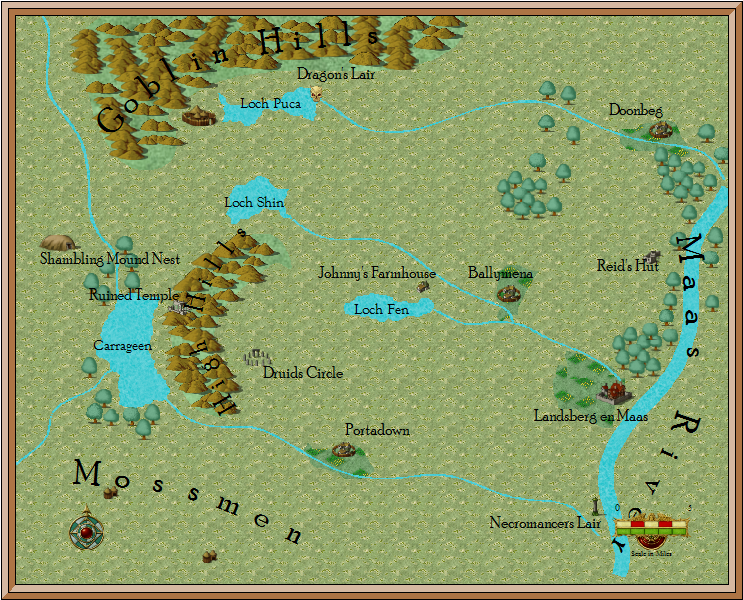