I've been in too many games where feeding was nothing more than a nuisance, something the players avoided unless they had too in order to recover from a particular battle, or minimized as much as possible with the presence of ghouls. Indeed, a number of players took great, if seemingly perverse, enjoyment on not hunting, having their characters spend multiple nights cooped up in their havens, watching TV or playing video games, and only hunting when the absolutely had too.

This always confused me, since hunting and feeding off of a mortals is pretty much the definition of a vampire. I mean, it’s what they’re designed to do. If you don’t want to play a literally bloodthirsty predator, then why are we playing Vampire? So, taking a cue from not only my own preconceived notions of what a vampire should be, but also from what the core book describes, I've come up with my ideas for feeding. It’s something I've started enforcing in the games I run, and so far has worked pretty well.

First off, a vampire's primary passion and focus is feeding. Drinking blood is the great pleasure of their lives--a combination of the best food, drink, drugs, and sex that a mortal can experience. Now, just as a gourmand will spend hours crafting the perfect meal, or a Lothario will spend time seducing a particular woman, so to will a kindred spend time “hunting” a particularly desirable vessel. This is not an inconvenient burden to most Kindred, but instead a rarefied pleasure, something they look forward to and engage with great gusto. Compared to the pleasure of being on the hunt, such acts as games, or movies, or even battle are like ash to a vampire.

In the modern city, the vampire population is generally set at roughly 1:100,000, creating a vast supply of vessels available to any Kindred, far more than they could ever possibly consume. This ratio is of course created not for their convenience, but instead as shield for them. Having less than 1% the of mortals in any given city ever even come close to interacting with the undead makes preserving the Masquerade that much easier. But this vast gulf of numbers creates an odd discordance within the vampire--having a practical ocean of blood available, they end up becoming picky and fickle, and living under an illusion of scarcity.

Vampires are not healthy individuals--they were ordinary men and women suddenly and often violently thrust into the role of supernatural predator. In addition to the moral and ethical issues that arise from such a condition, there is also the psychological toll. In many, this is expressed as a form of selectivity among their prey, as they find certain mortals preferable to others, and end up focusing their hunting on these select group to the exclusion of all others. Granted, this is most extreme in the Ventrue, with their flaw being the inability to feed off of anyone EXCEPT their specific prey, but many Kindred express this tendency. 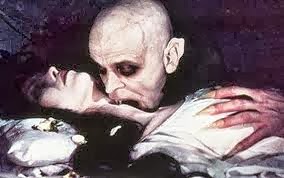 The classic favorite prey is of course the young and beautiful woman, but this is far from universal. This favorite prey can be anyone the Kindred desires, and is often tied more towards their own unresolved issues they had as a mortal than any lingering sense of sexual desire--though of course those whose issues are tied to sex remain fairly common. This proclivity is often expressed within the first few years of their unlife, and will often remain fairly common throughout their existence.

So, what kind of prey would any given character prefer? Well, it depends. Let’s take as an example of “nerdy young man who used to get picked on a lot.” He might go for the the beautiful model or Girl Gone Wild--which represents to him all that he couldn't have as a mortal, but now he can “take.” Or, he might go for the nerdy “wallflower” type--the girls he might actually have known and dated (had he the confidence), but for whom he always felt deep affection and unrequited crushes. He might feed on other “nerdy young men” out of a sense of both affection and lingering self-hatred, or he might target “jocks” and athletic men, driven by revenge for all the abuse “they” heaped on him as a mortal.

As the examples above show, the preferred prey can be a wonderful tool for characterization and focus for a character, taking them away from a generic vampires, to a specific person with specific issues and world view.

Now, given their preferred prey, once can also extrapolate behavior and influence. Let’s take our nerdy young man from above, and say he prefers the “Girls Gone Wild” type. As such, he tends to favor the college bar scene, where his prey is most easily located. In order to blend in, he seeks to look and behave as a “typical” college student. He might sign up for classes (part time, and night courses only, of course) so he has an ID, knows the campus, and can speak intelligently about the school and the issues that a “normal” student would face. He would seek to dress the way other “alpha males” at the university dress, and behave the same way; looking to pass himself off as, or at least similar to, a “cool frat guy” or the like--whatever he feels his prey would find most desirable and nonthreatening. Even when he is “off” and associating with others outside of the specific area of the hunt, he is still likely to dress and behave in a similar manner.

Secondly, his need to blend in and secure his own personal Masquerade would necessitate the development of some sort of influence.  He would to know how to manipulate the University, so he can attend there for a long time without being flagged as suspicious, as well knowing how to use the college bars and their employees to his own advantage. From these, further influences may develop, as various threats and risks inevitably arise that he must deal with for his own safety and the security of his “herd.”

Finally, there is the issue of how much blood one consumes on a given night. Physically, vampires only truly need to consume a single blood point to keep functioning on a typical night, assuming they do not need to heal or spend blood for any particular purpose.  I mean, as human, I only NEED roughly 2,000 calories a day, which I can easily get through basic foods combined with supplements. I do not NEED to drink alcohol, or consume other drugs, nor do I need to have sex for anything but the most basic of reproductive reasons.  Of course, we all consume/do more than we absolutely need to survive--after all, what is life without love, and what is a celebration without shared drink or food?

Besides, vampires are unnatural bloodthirsty predators--one blood point a night is starvation rations.

So, I assume that vampires consume MUCH more than they need on a typical night. The actual amount varies based on their Humanity. Those with high rating genuinely desire to consume less, while those with low ratings desire significantly more. As a rule of thumb, I use 10-Humanity Rating for the amount of blood a vampire wants to consume on a routine night. Some of the excess is spent as the Kindred burns blood to increase attributes, power disciples like Celerity, or to give themselves the “blush of life”--the rest is wasted. Because, you know, vampires are assholes.

For Paths, I deal with them on case-by-case basis. Those that espouse Conscience and Self-Control like Road of Heaven, would use the above rules. Those that follow alternate and in-human virtues would be treated as having a Humanity of 0. Such is one of the costs of fully embracing your identity as a vampire.

Failure to consume their preferred amount leaves a vampires shaken, like an addict going through withdrawal. If they did not consume “enough” during one night, the following night they are -1 to all dice pools. This is cumulative for each night they do not feed “sufficiently,” but each night of normal feeding likewise reducing the penalty. So, if a vampires is forced into hiding for three nights, on the third night they would be at -2 (they were fine the first night, -1 the second, -2 the third). If they could then feed to their content, they would go to -1, and after two nights of normal feeding, be fine.

One may spend a Willpower point to resist this, and the penalty is ignored for the night, though it still increases if one does not feed the following. Eventually, either the penalty or the lack of Willpower will force the character to feed, and with odds stacked so against them, once can be sure that their hunt will be messy, and violent. Regular hunting and feeding is necessary to control the Beast.

In game, when players hunt, i do tend to be rather generous. If targeting their preferred prey, I will often given them reduced difficulty, with bonus dice if they can operate in their “hunting grounds.” It is really only when one is forced outside of their comfort zone, or lacks such hunting grounds, that the difficulties and dangers or the Beast become apparent.

Knowing who and why a particular character hunts allows me to further develop and detail that character, be they NPC or PC. It allows me to see where they are strong, and where they are vulnerable, it allows me to understand how they fit into the city as a whole, and who they are likely (or currently are) running into problems with. In fact, without this information, I’m not sure I’d ever be able to run my “social sandbox” style of game.
at September 30, 2013