At it’s core, the method for creating characters has remained consistent throughout the various editions of Vampire: The Masquerade. Each has maintained the same fundamental framework of Establish Concept, Prioritize and Rate Attributes, then Abilities, Select and Rate Advantages, and then Finishing Touches. But, each handles things a little bit differently.

First, the Clans. 1st and 2nd provide seven Clans a player may choose for their character -- Brujah, Gangrel, Malkavian, Nosferatu, Toreador, Tremere, or Ventrue. Of course, a player could also choose to play one of the Clanless Caitiff. Revised extends this list to include the Sabbat and Independent Clans of Lasombra, Tzimisce, Assamite, Followers of Set, Giovanni, and Ravnos. 20th Anniversary, due to its nature as a “Compilation” of all previous books, includes all 13 Clans plus all the various Bloodlines presented throughout the years.

Secondly, the tweaked the list provided for “Concept” as well as slight modifications to the list of Archetypes for Natures & Demeanors. Neither of these were ever intended to be “canonical,” at least in the sense that they were the only options. Even in 1st they were clearly labeled as “Optional.” The Concepts became, over time, more nuanced. The Archetypes became more expansive, adding ones such as Autocrat, Monster, Masochist in Revised and Capitalist, Chameleon, Eye of the Storm, and Dabbler in V20. Oddly, two from 1st were cut from 2nd, never to be seen again -- Cavalier and Plotter.

What’s most interesting to me is the “Example” given in each of the Editions. 1st has the most in-depth treatment of Character Creation out of all the Editions.  In the example given, “Lisa” is creating a character for a new Chronicle to be run by “Mark.” I’m assuming these are Lisa Stevens and Mark Rein*Hagen, respectively. Lisa comes up with a concept for a new character, Malcolm. The books takes us through Lisa’s generation of Malcolm, from initial Concept and deciding on his Nature and Demeanor, then all the way through the various Prioritizations and Ranking until we have a complete character. 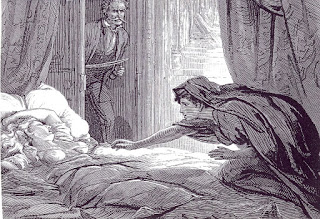 What makes it unusual is that, at the end of the Chapter, we have an additional Example; an Example of a Prelude. Now, the Prelude is something that is supposed to happen for each character prior to play--a way to test the character out and get to know them better before the game officially begins. I don’t think I’ve run a Prelude, at least not a “proper” one, and I certainly have never played through one. Even after reading the Example given, I’m still not sure I’d run one as written, but it's certainly interesting. Especially how the player and Storyteller work off one another to develop the character, sometimes talking in broad outlines, other times playing out small scenes.

2nd keeps the use of Lisa and Malcolm for their character creation Example, but the prelude is gone. As a result, Malcolm feels a bit less interesting, to be honest. In both cases he’s a former undercover cop, a cold and broken shell of a man who now preys on the most desperate members of society, believing in his own warped sense of “vigilante justice.” But 1st explains him better, making him both more human and more monstrous. It also makes clear not only his potential Anarch allegiance, but also the reason for such.

Revised introduces us to “Lynn” who is going to play in “Justin’s” Chronicle. I assume “Justin” is Justin Achilli, but I’m not sure who “Lynn” is. Lynn chooses to create a character, and explicitly chooses not to name it after herself, as that would be too “Freudian.” (I have no idea where this comes from. Some dig at Gygax and the original Twin Citie/Lake Geneva gamers? It’s just odd in that it comes out of nowhere.) Instead, she creates Veronica Abbey-Roth.  Again, we go through the various stages of Character Creation. Veronica is a wealthy and ambitious Kindred, ready to make her mark on the salons of Chicago.

V20, befitting its nature, has no Example of character creation.

There is an interesting progression among the characters presented, however. 1st Malcolm is clearly a damaged individual, forced by circumstances into the world of the undead, and further forced into the arms of the Anarchs as a result of the cruelty of the Prince. 2nd is still damaged, but his path has not yet been set. This could just be a result of the excising of the Prelude Example, but he seems more...undefined. Ready to take shape more as a result of the events in the Chronicle than the events that have transpired in his past. He still remains, however, a street monster. Revised’s Veronica is a different beast altogether. More competent, more together. She fits into the Camarilla and the powers that be, and her change is less “monstrous” than “an even better predator.”

I’ll have more to say about this later, but for me this is an example of the changing nature of Vampire. The mechanics remain the same, or at least very similar throughout the Editions, but the focus, concept, and feel of the game does change quite a bit.  1st is about the Anarchs. They are our default characters, the ones we are supposed to identify with and support. In fact, in quite a few supplements the authors use the term “the anarchs” interchangeably with “the coterie” or “the players,” similar to how Dungeons & Dragons uses the “the heroes” interchangeably with “the party.” In 2nd, Anarch allegiance is still assumed, somewhat, if only because the Elders are such rat bastards, but it’s no longer the default. The characters seem more free to make their own way in the world. The story is more about the individual characters, than it is about the Jyhad. By Revised, the Anarchs are an afterthought. A weaker sect, caught between the dual titans of the Camarilla and the Sabbat. It's not just that characters are no longer assumed to be anarchs. Instead, the question is, why would they even bother, given how easily they can find a home in Camarilla or Sabbat society “proper.”

As the anarchs decline from the forefront of the game, new options become available. It's mentioned in the Example section for Revised that Justin is planning on running a Camarilla game, but that he wouldn't be opposed if a player wanted to have a Sabbat infiltrator as her character. This concept wouldn't have even existed in 1st. A Sabbat infiltrator would have been a monster, and quite possibly a foe of the coterie (of course, that's assuming they even recognized him for what he was. Even in 1st the devil could be subtle), certainly not something you play.

There are a few other changes, of course. In 1st and 2nd one of the key Knowledge Abilities was Bureaucracy. This was replaced in Revised and V20 with Academics. I suppose that playing an adventuring Archaeologist is cooler than a paper pusher,  but I often find that Bureaucracy, and it’s ability to understand and manipulate organizations behind the scenes, is a bit more useful Ability for a Kindred than recognizing which Dynasty a particular clay pot was crafted in. Investigate is more than sufficient for handling research.

Other Abilities changed as well between 1st/2nd and Revised/V20. Acting and Music were replaced with Expression and Performance. Repair became Crafts. And then, in V20 Security was replaced with Larceny. These replacement Abilities are generally broader and more universal than the originals.

In addition, the Ability of Linguistics changes slightly over the Editions. In 1st/2nd it allowed you to have one additional language per dot, up to a maximum of 5 additional languages.  In Revised, you have an exponential increase per dot, allowing up to a maximum of 16 additional languages at 5. V20 does away with Linguistics as a skill entirely, turning it into a Merit (1 point cost, can be bought multiple times, each Point provides a Language). Instead, one has access to an Ability called Technology--I guess to cover machines and equipment not covered by Computers or Craft.

Linguistics has always been one of the more complicated issues for the Storyteller system to resolve. And it comes down to the exponential nature of it's Abilities. Someone with one dot in Science has graduate High School, and received decent marks in Science. Two dots is someone with a Bachelors degree in Physics, Chemistry, Biology, Engineering, etc. Three dots? A Masters degree. Four dots? PhD. And Five? One of the greatest scientific minds of their generation.

Now, for your typical white, suburban American, someone speaking more than one language seems like ungodly magic. How can one contain such multiple thoughts in one mind?!?! Knowing two or three requires dedication and skill, something action heroes on TV possess. Of course, for many other people, knowing multiple languages is just a day to day thing, and certainly nothing comparable to an advanced scientific degree. In such a manner, V20 probably handles it best. Of course, the Storyteller system has always been a poor reality simulator, so I'm not sure if its handled better as an Ability or a Merit.

And that leads us to the next change in Character Creation that happened in the changeover to Revised--Merits and Flaws. While these have been part of Vampire from the beginning, in 1st/2nd they were placed in the Player's Guide. Come Revised and V20, they are now part of the “core” material, even given a special place on the provided Character Sheets.

Of course, there were further changes done to the basic Characters, mainly in the alterations to the Clans, most notable the Assamites and the Malkavians. But these are significant enough to warrant their own post.
at August 14, 2015