Let’s Compare the different editions of Vampire: The Masquerade
Setting

Probably the most striking difference in the Setting as presented in the various Editions of Vampire is how much more detailed and codified the presented setting became. Obviously, there's continuity between each Edition -- there's always a Camarilla, Sabbat, and Inconnu. There's a Prince, there's the Traditions, the Primogen, the Elysium. There are the Conclaves and the Justicars and...well, actually, that's about it. At least, that's about all there was in 1st. 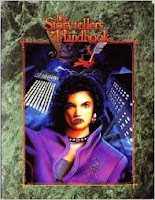 I mean, granted, a bit more information was presented in the various by Night books and in the Storytellers Handbook. But, at it's core, the information is relatively sparse. In a way, it reflects a more wide open take on the setting. Take, for example, the brief information we have for the Primogen in 1st.

Many Elders invariable support the existing Prince, simply because they do not wish to risk turmoil. They have grown protective of their long lives, and they do all they can to provide themselves with a stable environment. They are extremely conservative in all that they do, for they seek only to survive, not to evoke change. This group of Elders has become known as the Primogen...

Not quite the description we are used to seeing for such characters. No comment on their status of "Clan representatives," no concept as to how one becomes a Primogen, merely that they are a powerful force that supports the Prince, but out of their own, base, concerns.

By 2nd the Primogen have been altered a bit, into a group of fractious "advisers" who are the only Kindred in the city comparable to the Princes power.  Of course, by the time 2nd came out, there were quite a few by Night books (Milwaukee by Night, Chicago by Night, and Alien Hunger) that that have given the players and Storytellers a certain sense of what to expect in a given City, and how they were "supposed" to be setup. And it is in Revised that this influence becomes most apparent.

In Revised certain roles are now heavily codified, and expected to be present in most if not all cities. These are:


V20 includes most of the positions in Revised, but adds details on the Archons, the Alastors, and of course the various positions within the Sabbat. As the Sabbat as a playable Sect is a bit outside this series of posts, I don't really have much to say about these additions. Except to note the oddity that the Seneschal has been dropped from the various positions within the Camarilla. I suppose the Princes got sick of fighting over who would be their assistant, and just made a childe or an ally do it without the benefit of a fancy title. Also gone is the Whip, to no ones remorse.

Oh, and the Sheriff now has "Hounds" who aid him. I suppose "Deputies" would have been a bit too on the nose, but "Constable" would have been valid. Well, you know vampires, no respect for history.

So, what exactly are the changes? Again, it comes down to a greater amount of information and detail presented in later editions. But, the cost of that detail is a certain degree of sameness also takes over the Setting. The Vampire settings of 1st required far more work for the individual Storyteller to bring to life, but also allowed for a far greater degree of uniqueness within the Setting. And one just has to look at the initial cities presented in 1st--Gary, Chicago, Milwaukee and Denver. Gary has only a few vampire, most living their own lives, paying only the most token amount of respect to the Prince. Milwaukee is a god damn war zone, with the Prince and his enforcers (oddly, the characters) barely holding on as the Elders sit in council and seek to destroy each other. Denver is ruled by a Triumvirate of allies, and the city is divided less by Elders vs. Anarchs than it is by the "Court" (The Triumvirates hangers on) and the "Outsiders" (those who seek their own in the world). Chicago most closely resembles the later Settings, with the Sheriff, a coterie of Harpies (though dubbed "Annabelle's Party Elite"), a Seneschal in the form of Neally, and a powerful group of Primogen manipulating everyone behind the scenes (though of course these aren't "one for each Clan" and their large number is presented as something of an oddity). 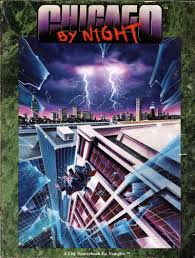 Obviously, Chicago by Night had a huge amount of influence on subsequent developments in the game, but sometimes I wonder what would have happened if things hadn't been so codified. Would the Chicago model remain the base line? Is that really the coolest and most interesting way to organize the characters in a given setting? Or would we have seen even further experimentation and radically different takes on the "standard" setting.

My personal theory is there was a force working to ensure a certain degree of "sameness" and conformity on the Setting, and it had nothing to do with the Camarilla. Or, wait, maybe it did. There was a fan club called The Camarilla (Minds Eye Society). They were (are?) primarily focused on the Live Action Roleplaying part of the fandom, and held a lot of influence over the direction of the game. In many ways, this was a positive thing--Vampire had, and still has, some of the most dedicated and engaged fans of any RPG, and the LARP community is a huge part of that.

However, the needs of a Live Action game are different from a Table Top game. A Table Top game can have a coterie of gossipy Elders and Ancilla off on the sidelines providing color commentary to the players actions. In a LARP, however, you (or, well maybe not YOU you, but a living, breathing person) is playing one of these gossips. As well as other people playing the other gossips. And still other people playing the people that they are gossiping ABOUT and on and on until it's just turtles, all the way down.

As such, there was a need to define and give mechanical game support to such a position as "gossipy elder." In theory, this shouldn't have been necessary. The gossips who get together and talk about everyone else until they reach an unofficial, but not less authoritative, decision on the behaviors in question just...happens. It happens in High Schools with the stereotypical "Mean Girls." It happens in politics with the "Pundits" (yes, Bill O'Reilly and Rachel Maddow are OUR Harpies). It happens at any sufficiently large organization or group, no matter how unoffical or nebulous such a group is. In many ways, these gossips are the glue that hold a group together.

So, they should emerge naturally in an environment such as a Larp. Throw a bunch of people together and, over time, certain roles will naturally be fulfilled. Alas, since a game is not reality (stupid reality), this didn't and couldn't emerge naturally. A Larp may only exist for a single night, or a single weekend, and such positions still need to be filled. Or, for a long running Larp, a given player may wish to play such a character, even if they lack the natural talents, connections, or interest to do so outside the game. We certainly don't require the Brujah player to be a weight lifter and trained in mixed martial arts, so why should such standards apply to the Social characters?  But, if we can't rely on "natural" results, then the game has to step in with the necessary mechanics.

In fact, I'm fairly confident that the major changes in the game from 2nd to Revised are due in large part to the influence of the Live Action community. The decline of the Anarchs from "default characters" to "one option out of many, and a poor one at that"? Well, yeah, because you had people playing the Primogen and the Harpies. When rage against the machine, when you can be one of the well-compensated elite? The switch of the game from Personal Horror with politics as the back drop to a political game with horror tropes? It's hard to do Personal Horror when you have a hundred other people at your house, and they're all playing together.

I sometimes wonder what would have happened if the game hadn't gone the way it had. Obviously, any game is going to add details and nuance and more information to its setting as time goes by; it's the nature of the publishing beast, and the fans will often demand it. But what if it had stayed with the more flexible and vague setting of 1st, and kept its focus on Personal Horror rather than pure politicking, or ignored the great Sect Wars that came to dominate the game later in its run? To some extent, the answer is Vampire: The Requiem, but that game never satisfied me. Or, more accurately, never inspired me the way that Masquerade has been able to, even after all these years.
at August 20, 2015