Let’s Compare the different editions of Vampire: The Masquerade
Degeneration 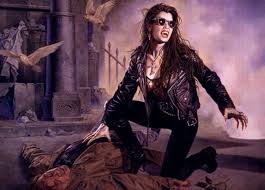 Back when we were looking at Derangements, I went on a bit of a rant about how Vampire is fundamentally a different kind of Horror game. While it has the classic tropes of horror--vampires, werewolves, witches, oh my--it's really all that horrifying for a player.  There's something very different in being the victim of supernatural evil, and the perpetrator of it. When you start rooting for the undead killing machine, it stops being horror and becomes something else. If you want to keep the horror alive in the, it can't come from outside, from something targeting the characters. Classic horror is the result between the average man confronting the horrific, and struggling against it. Personal Horror comes from within, from committing the horrific.

Probably the most famous and iconic horror role-playing game is Call of Cthulhu. One would be hard pressed to find a horror game out there doesn't owes its existence to Call of Cthulhu. Most are deeply indebted to its design, either through liberal copying and inspiration or rejection and replacement. At its core, it has one of the earliest "universal" systems, its most defining mechanic is the "Sanity" system.  As the characters are confronted with more inhuman and inhumane acts and creatures, their Sanity gradually slips away; forcing a race to see if it is death or madness that claims them first. Sanity can be slowly and painfully regained by overcoming the monsters that lurk in the shadows, and by turning to professionals for aid and comfort.

I bring this up, because the more I read through these books, the more I'm convinced that this is the Horror that, to one extent or another, inspired the mental states that define Personal Horror in Vampire. The Beast that resides within each character compels them to commit increasingly terrible acts, and it is the struggle against this, the striving for control and sanity, and the response to these acts that make Vampire.

1st
When a character commits an inherently immoral act, either willfully or "despite their best intentions (e.g. Frenzy)," they run the risk of losing their Humanity. They most roll one of their virtues; though which one varies based on the situation. If in a Frenzy, they roll whichever virtue got them into this mess. The Storyteller may decide to allow the player to choose, as it gives them some control over the circumstances of their potential loss.

Obviously, there is potential for overlap in the above categories, hence why it falls on the Storyteller, and the player, to decide which they feel makes the most sense based on the particular incident.

A failure on the degeneration check results in not only a loss of Humanity, but also a loss of the virtue rolled. A botch indicates the character gained a Derangement.

2nd
With 2nd, the only virtue rolled to resist degeneration is Conscience, at a difficulty of 6. Self-Control and Courage have no role to play. A failure causes a loss of both Humanity and  Conscience. A botch means the character receives a derangement as well.

Revised
In Revised, the difficulty for the Conscience roll to resist degeneration increases to 8. On a failure, the character loses only a point of Humanity. It is only on a botch that one can lose both Humanity and Conscience. There is no risk of gaining a derangement as a result of degeneration.

As with many of the other variations, 1st has the most unique degeneration rules, at least compared to the relatively minor differences between 2nd and Revised. Which fits with the generally more "wild" take that 1st presents for Vampire in general.  I'm not sure how much of an effect the use of multiple virtues in rolling against degeneration, but its definitely an intriguing setup.

The other significant change is the potential to acquire a derangement as a result of botching ones degeneration check. I think this again reflects the more "wild" and "gamey" take that earlier editions had with their approach to derangements, allowing for both more frequent accumulation of such disorders, as well as for methods to overcome and be "cured" of them.

Humanity and degeneration are one of the most controversial elements of the game, with each player and Storyteller having radically different interpretations of what they mean. Sometimes these are a result of different philosophical viewpoints, sometimes "power gamers" wanting to get away with anything they can (I've seriously seen a player argue the ST that his Humanity 8 Kindred shouldn't have to roll for brutally torturing a mortal, and succeed), and some just being trolls. It's up to each Storyteller to have a solid grasp of how they want degeneration to work for each individual Chronicle, and to keep it as fair and neutral as possible. Personally, I'm charmed by the quirkiness of 1st; I feel that the more gamey take on it would actually make it more likely to be used as part of the games I've involved in and more fun for everyone, but this really is a case where there is no "correct" answer.


As a final aside, it wasn't until Requiem Second Edition that the basic setup for Humanity was really altered, and viewed from a different angle. Rather than being a system of morality, its far more of a spectrum between the Beast and the Human. One can be "evil" but still very human in this system, or "good" but ultimately inhuman. For this very cool and interesting take on this pillar of Vampire I recommend checking it out here.
at November 02, 2015