As I've mentioned in my previous post, I'm going to try run a solo game of Vampire for myself. I play the character like I normally would, using all the standard rule but will use the Mythic GM Emulator to determine what's going on, what twists and changes happen, and the likelihood of events that aren't covered in the basic rules. As part of this, I want to embrace chaos and randomness, and so I'll also be using the Random Prelude generator from the Masquerade Players Kit.  I have never used this before, so I have no idea if it's any good. But, it reminds me of other features of 1st Ed. Vampire, when they still embraced being a "game" and had charts and random encounters, and everything wasn't so locked down and narrative driven.

Now, certain people (most notably +Zach Best), have pointed out that overly embracing chaos might not be the best decision. That I should approach the solo game with the same attitude as I would any game I would run. That I should detail the setting, develop NPC's, come up with a Theme and Mood, and just all the things one does when preparing a game to be played.

I have a hard time arguing against this idea. I mean, you really should do this. But...I'm not going to. I should have a couple of hours free this Friday night, and I want to play, damnit, not develop another setting. I want to test out the various rules--the GM Emulator, 1st Edition Vampire, and the Players Kit.  I want to throw all these toys on the table and see what I can do with them. If they're fun, I'll do it "proper" later, but for now, let me quote a man known far and wide for his wisdom and clear thinking:

Ok, let's see who our hero protagonist is going to be!

Ok, so, this guy has a bit going on. He was raised by a single mother, who struggled despite her education (worked in Research & Development, after all). His sister is a mage, and his grandmother is a vampire. Has a couple of mental issues, and a history of crime as his background.

His mother, despite her skills and training, was held back at the lab she worked due to her gender. She put up with it and stayed, as she had two children to think about. I'm going to assume that the vampire grandma is on the fathers side, and his Dad died as a result of vampire politicking and BS--his whole life he thought it was just a random act of violence.

I need a name, and given the criminal background and the fact I just rewatched John Wick the other night, I'm going with "generic Eastern European," so Andrei is it. Mom's name is Alina, Grandma is Irina, and Sister is Elena.

So, Alina did what she could for her children, but Elena was obviously the favorite, the one who had inherited her intelligence and passions. Andrei was...disturbed. Something happened to him as a child that left him with claustrophobia, and I'm not sure what it is yet. I'm thinking the actual cause is somehow repressed. He was probably the victim of Elena's incipient gifts, and he experienced something he could never truly understand. This, and their mothers preference for her, leads them to having a cool relationship.

So, Andrei left home before finishing High School, and took to the streets, which further frayed his relationship with his mother. He and some friends were a small gang, focused mainly on mugging and small time robberies. He did ok, but eventually the law caught up to him, and he had to serve time in juvie. Per the chart, something happened in there that destroyed any interest he has in sex, and while I can imagine a few scenarios that could cause such a reaction, few of them do I wish to explore in depth. Let's just say that juvie was...unpleasant. He was able to get his GED, though, and thanks to a special program and his willingness to enlist, his record was expunged. (It's a bit more complicated than that, but we're doing a high level over view here, not a biography).

He served his four years, but when he left he had little to come home to. Through some old friends, he started working protection for a few prostitutes, before working his way up to being a pimp. He was able to finally "go legit." My first thought was "escort agency" but I rather like the idea of him trying his best to to get out of the game. Instead, he put his savings, and a rather healthy loan from the mob, to buying his own motel. It's a dive, and most of the clientele are prostitutes, johns, and addicts. But, it's a start. Or, it was, but he never quite able to move beyond that, no matter how much he tried.

He's obviously still tied to the Russian Mob, probably more than he realizes. His grandmother was most likely watching over the family, protecting them when she could, be leery of drawing too much attention to them. I assume that Elena was her initial chosen one, but when her magic became real, she left to pursue her own studies, Andrei became Irina's only choice. He secretly worked for her for a while, dealing with middle men. Had his marriage lasted (and given his issues with sex, it's no surprise that it fell apart), Irina would most likely have left him to live his life. But seeing him wasting away, alone and with no family, she felt she needed to intervene. She sent more work his way and gave increasing responsibilities. Responsibilities that ultimately led to him making the wrong enemies, and to him being shot in an alley. Unwilling to see him die like his father, she embraced him.

For Nature, I see him as inherently a Conformist. He just wants to belong, to be normal. He was ignored by his family for the crazy, wild sister that almost killed him, and he turned to his friends, which led him to crime, which led him to "the family." His Nature is "Bon Vivant"--part of being normal to him is having "stuff," being respected, and looking and acting like you have it all.

For Clan, I roll a D7 and get a Brujah, which is fine. I've never played a Brujah before, so let's see where this goes.

Chronicle Name? What else but "Alone in the Darkness." 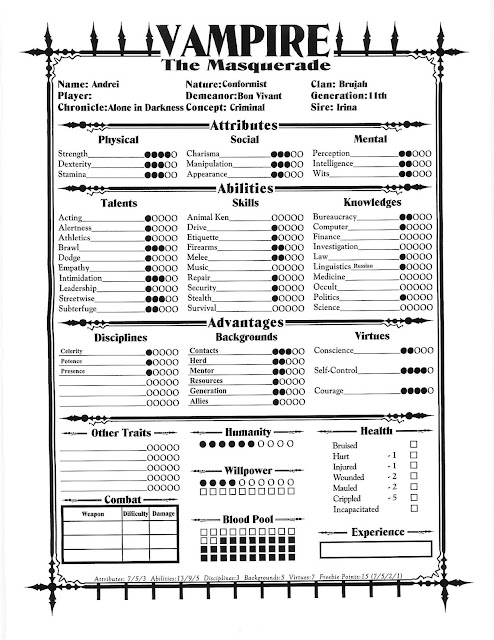 I used my freebies to round out my skills and Backgrounds.

I'm not sure I want to mess around with Merits & Flaws, but he does have a few. First off, he's in debt to a couple of other Kindred. Assuming this takes place in Chicago 1st Ed, then that means Lodin is no longer allowing new embraces. Irina would have had to take him to Modius in Gary, who would have had to "backdate" Andrei's embrace to make it official. They both owe him. But, Irina didn't know Modius, and most likely she went through Juggler (the "anarch warlord" of Chicago), and so Andrei owes him as well.

Juggler--or, more accurately, his crew--is using Andrei's motel for temporary havens, sheltering out of town Anarchs, and for feeding. They're not their often, but even their occasional visits are putting a strain on his place. Worse, he's fallen into debt with the Mafiya (anarchs are notoriously bad at paying their bills...), and they're starting to put pressure on him.

For hunting, Andrei tends to prefer to prey on his guests while they are sleeping. The motel has some staff, which he generally leaves alone. They know he's "connected" and the owner, so his weird hours don't draw attention. But, they have no idea who he really is, and so don't qualify for "Retainer."

The Russian Mob is in an interesting transition. Unlike traditional American OC's, there's no central hierarchy.   It's also growing rapidly, and becoming a force on the streets. Both Capone and Kevin Jackson (both childer of Lodin, the Prince), are seeking to gain control over this new force. But neither wants an open war, and the mob's amorphous structure makes it difficult. Irina wants it for herself. She's tired of the failed revolutions, and being forced to work with others she views as beneath her (like Juggler), and so she is trying to make her own moves which will naturally put her at odds with both of these powerful Kindred. What roll she envisions for Andrei in the struggle is to be seen...
at January 08, 2016