Scene 1 The Arrival.
The journey takes 6 nights of travel, and it is a harsh trip for the vampires, though peaceable enough. Johann and Samuel are able to feed sporadically along the way, and are only down 3 Blood Points. Godfrey, due to his “refined pallet” has not been able to feed, and is down the full 6. Near midnight on the final night, as they approach the outskirts of the village of Redford, they hear the harsh laughter of men and see lights and torches near a peasant’s hovel.  Just before the men ride off, they hear one of them proclaim “Consider my offer, Jill. You will learn that we can make you hear the angels sing.”

They approach the hovel, to see a lovely young woman wrapped in a blanket, crying softly to herself. It takes a few moments before she notices the coterie, and is alarmed at the site of the pale and silent visitors. But seeing Godfrey’s fine clothing and his two armed and armored guards, she assumes he is a Lord of some sort and keeps her manners. She is initially reluctant to tell them of anything, but as Godfrey gently pushes, she tells them her story.

Her’s is a tale of woe. Her parents passed last spring, and she alone has been left to care for the farm and her three young brothers. The Earl’s brutal Warden, DuBois by name, has made his interest clear to her, but all she has left is her virtue. His harassment has recently increased, and now includes threats against her brothers. She knows not what to do. The Earl is known to be cruel and harsh to those who appeal to him for justice, and even more brutal to those who speak against his men. There is no one in the land to aid her.

The intoxicating aroma of the virtuous peasant girl is almost more than Godfrey can bare. And while he speaks courteously to her, he moves ever closer, and is overly familiar with his touch. When Johann attempts to distract his master, to urge them to leave the girl be and to continue their mission, he is cruelly dismissed to ride ahead and scout the road.

Undistracted, Godfrey makes a Self-Control roll and succeeds. He does not slay the poor girl, but merely drinks a sip from her. He might not find such a perfect vessel again in these lands. He does, however, use his vampiric discipline of Dominate to forbid her from speaking of him or his companions to anyone, nor to leave her farm for the next week. He wants to know exactly where she is for when he is ready to feed.

Unfortunately for Godfrey, Jill is a girl of true faith. Actually, make that True Faith, and so Dominate does not affect her. Of course, her shock and terror and desire to not further put herself in danger leads her to acquiesce to his strange commands.  Though, come dawn, she will find that she is not as alone as she thought…

Scene 2. Millstone Castle.
Millstone castle is a simple structure. A large and powerful central tower, the Keep, dominates over a slight rise. Around it, a ring of stone walls protects a central courtyard. Inside, the coterie hears the sounds of drunken laughing, and Samuel picks up the same voice as they had heard before. Johann pounds on the gate, and it takes forever for a man to approach it. He is initially dismissive of Johann, but the site of Godfrey makes him rethink his rudness, and the guard (one of the Warden’s “Assessors”) allows them entrance.

Inside, they see a collection of ruffians and thugs sitting around a bonfire, laughing and tormenting the two nearly naked women who move between them. As they wander between the men, each gropes their exposed skin and cuts away more of their clothing. One woman is clearly frightened, while the other expresses only a blank, shocked face. The one who opened the gate calls out to DuBois, crudely announcing the visitors. The Warden offers his “turn” to a man sitting in the back, who demurs from the game.

DuBois is initially aggressive with the coterie, but the letter and Godfrey’s noble bearing quickly disabuses him of that. In fact, Godfrey is soon berating the Warden for his shameful behavior, on this night, as his Lord and Master lies on his sick bed, dying. The Warden should be in prayers for his master, or at least maintain a respectful silence, if such a pig is even capable of such an act. The Warden, despite his power, has no choice but to accept the abuse. Confident he has put the man in his proper place, Godfrey begins to make his way to the Keep proper when Johann chimes in, asking if the women should not be let go. Tired of the Gangrel’s constant moralizing, Godfrey orders Dubois to let the women go. But upon smelling their blood and recognizing their virtue on scent, he changes his mind.  He orders Johann to escort the women home safely, and to make careful note of where they live. He might find to visit them later, to ensure they are…being treated well. Unhappily, Johann obeys his better.

As Godfrey heads to the castle, one of the men, the quiet one, rushes to escort them. Away from the fire, he introduces himself as Wilfred, a servant of Nicholas’ sent ahead to scout the area. He was looking for other vampires who may be nosing around, and joined DuBois’ Assessors to get the lay of the land. He guides them into the Keep and to the Earl’s chambers. Along the way, Samuel notices a beautiful lady watching them from behind a door, but when he turns to look at her, she closes it. Wilfred recognizes her as Karin, the wife of the Earl’s son. 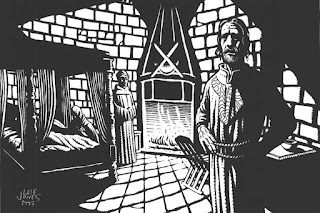 Scene 3
Wilfred knocks on the door to the Earl’s chamber, and the coterie are admitted, though Wilfred remains outside. Inside the room is Alfred, the Earl’s son, two monks praying in a corner (one of which is Father Lucien, a servant of the Toreador Remus who covets the County for his own end), and in a large bed which dominates the room the dying Earl himself.

The Earl is eager to hear from his “dear friend” in London, and makes it clear to Godfrey that he knows exactly whom he serves. The two talk privately, and Alfred speaks with Samuel, who quickly realizes that Alfred is a vampire as well. The monks keep to themselves, but over hear everything. Eventually Godfrey asks to speak to the Earl alone. While the monks and Alfred initially refuse this, the Earl bids them leave with a tired wave of his hand. Once alone, the speak freely.

The Earl is terrified of dying, and not to subtly expresses his belief that Godfrey can aid him. Godfrey hints that it is possible, but the Earl wishes more than unending life. He wishes to have his youth and vitality restored as well.  Despite the Earls rank, Godfrey feels no compunction to honor this mortal as anything resembling an equal, and so he simply lies to him. “Indeed,” he tells the Earl. “Such a wish could be granted, but at a cost.”

“First, your youth can not be fully restored to you. I was once a man such as yourself, of a similar age. When the change came to me, my youth, which you see, was returned. But not everything.” He holds up his whither hand. “Perhaps the same will affect you. Or perhaps your face will still bear your old visage, while your body becomes hale and hearty. It is hard to say with certainty. In addition, you will need to say farewell to this life. For three nights you will slumber beneath the ground, much as our Lord did after his crucifixion. It is only on the third night that you will rise again, eternal and immortal. You will be, to the mortals, dead. But your life will be your own, and you may travel where you will.” As he will lay dead for three nights, the Earl will have to sign the will deeding his lands to the King prior to the change. Godfrey is, of course, lying. But he is telling a story the desperate and dying man is eager to believe.

He believes Godfrey’s tale, and signs the document that Godfrey brought with him.

Does Samuel do anything about this cruel manipulation?  Self-Control roll: 6,1,3,4. Yes, he speaks up, urging Godfrey to not do this, to find another way. In his outburst, does he reveal the real plans? Likely (75% chance): 98 -- EXCEPTIONAL NO. If anything, his outburst assuages any doubt the Earl may have.

Is anyone outside listening to this? Likely (75% chance): 80 -- No. Godfrey is able to carry out his plan with little issue. He feeds on the Earl (though his impure blood does little to assuage Godfrey’s hunger), but just enough to leave him weak, and near death.

Scene 4 The Meeting
They meet Karin, and Alfred. Karin makes the plea that Galtre is better suited to Nottingham’s control, and Alfred is the legitimate heir.

Godfrey responds with disdain. They are emissaries of Joseph, the Dark Father, and those who oppose his will are not mere rebels, but heretics. He has declared that the lands are to return to the mortal King, and who are they to question the wisdom of the founder of their kind?

The argument is about to become heated, when Father Lucian arrives to inform them that his Lordship has passed. Alfred and Karin are surprised, but Godfrey is smug. Lucian and Alfred argue about inheritance, but Godfrey produces the signed will with a flourish, leaving the gathered shocked and silent. Regaining his wits, Lucien cries out “you don’t know what you’ve done!” and quickly flees the chambers. Godfrey cares little for the concerns of the mortal monk.

Karin makes a final plea, and offers the castle as a place of refuge for the coterie. Godfrey’s replies that it is no longer theirs to make such an offer, but as the representive of his Dark Majesty, they are welcome to stay and enjoy the hospitality of the castle. Karin and Alfred are left fuming, but Godfrey is proud of his job well done.