Following her lead (from Scene 1), Hanson is prepared form some sort of fight. As such, she has spent 2 of her Blood Points to heal, bringing her down to 6 currently. In order to further ready herself,  she also goes ahead and spends 3 more Blood Points to increase each of her Physical Attributes (Strength, Dexterity, and Stamina) by 1 each.

As per the results of the last scene, Hanson is about to engage in a fight with the Opponents best fighter. I don’t know who the Opponent is yet, or who this Fighter is. But, I can make some assumptions. First off, his combat ability will be good, very good. The Physical Threat for this Story is 7, but that’s the base line. The “best” would be at least 2 better than that, which means whoever the Fighter is, they’d have at least a 9 in all relevant dice pools. I also decide that the Fighter is a vampire, and older than Hanson. In Vampire, age is, generally, the most important element that defines a vampire’s raw power. I use a combination of Mythic rolls and the Random Vampire rules to come up with the following: 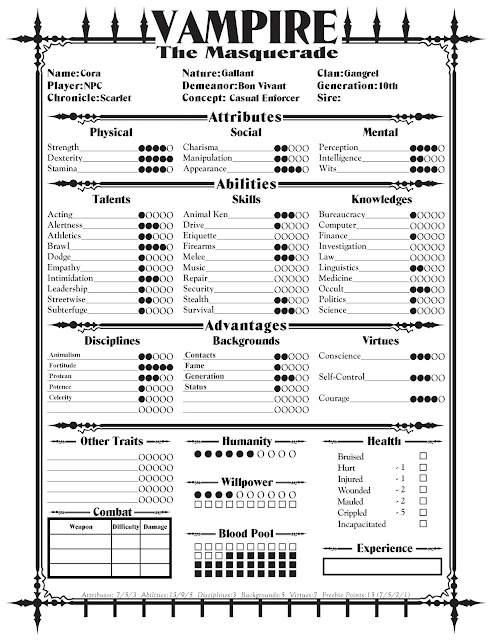 Two other questions remain:
Does Hanson know who this person is? Int+Streetwise at a difficulty of 6 8,4,7,2,--yes.
Does Cora wish to kill Hanson? Killing a vampire is a dangerous choice, and one of the few crimes the prince is sure to take seriously, particularly if the vampire in question is one of “his.”
Does Cora wish to kill Hanson [Unlikely—35%]? 68 NO.
Vampire is a game of factions and politics, but some people can move between them. Hanson is pretty new to the game, and hasn’t met everyone in town yet, nor does she understand how they all interrelate. But, Cora is pretty well known among vamps, and her presence here could be the tip off that Hanson needs.
Does Hanson know who Cora is working for? [50-50—50%] 100 ABSOLUTELY NOT
Cora is an unpredictable and works with various groups. Hanson has no idea who she could be working for.

Hanson lost the fight, and the Scene. Since Hanson lost, the Opponent automatically gains a Victory Point. In addition, the Opponent gets to roll against the current scene count and gets a 4—they do not gain an addition point.

Hanson will take a Rest action this turn. This will allow her to regain all her lost Blood Points and heal all of her wounds. As this is not an Investigation or Action Scene, the Opponent does not get to roll. However, the Rest action automatically grants them a Victory Point.

I wonder where she’ll go next. She could attempt for force a Conflict, and reduce the Opponents Victory Points, but I feel she still needs more information. She’ll go with an Investigation scene next. I roll and get:

Trick an Actor into revealing a Clue. Roll a die; on an odd result, you face a Fight whether or not you succeed on the check.

Well see who the Actor is and what they know next time!