Now that we have the basics for creating a random vampire in place, let's see what we can come up with.

Oh, quick note, I did some light touch ups on the random vampire post--cleaned up the tables, and added an "age of death" option.

There's a bit of a mix here, between these four elements. Her Nature (who she truly is at her core) is a Traditionalist, described in the core book thusly:


You are orthodox, conservative and traditional. While you welcome some innovations, in general you are opposed to change for the sake of change -what point is there in that after all? You may be a miser, a collector, a reactionary or an old fogy. You want to conserve as much as possible and strive to always preserve the status quo.

-Regain a point of Willpower whenever you are able to protect the status quo and prevent change from occurring, such as when someone attempts to change or modify plans or rules that have already been established by the group.

Her Demeanor, Conformist, works well with this. Others might think she follows the powers that be for a variety of reasons, but the truth is, she CHOOSES to. This, combined with her background as an Investigator makes me think she was an "official" agent--a detective or the like. It's her Clan that's a bit odd, though. The Brujah are, iconically, "rebels"--free thinkers and anarchists who challenge the status quo.  Which makes me wonder WHY she was chosen. Well, hopefully we can come up with some ideas later.

Physical is her Primary Attribute Category, so she clearly wasn't a "behind the desk" style Investigator.  There are three physical attributes--Strength, Dexterity, and Stamina. Each begins with a value of 1 (barely functioning), and go up as high as 5 (peak mortal ability). She has 7 points to spend, and the assumption is that they are evenly spread out. I roll to determine which is the "highest" of the three.

3 Strength is her highest attribute, and 3 points are assigned to it, for a total of 4. Of the remaining 4 points, 2 are placed into both Dexterity and Stamina, giving her a total of 3 in each.

There are two more Attribute categories, Social and Mental. There is an equal chance that either is "Secondary", so I roll for it.

Social (1-5)/Mental (6-10). 1. Social is her Secondary trait, which has three Attributes: Charisma, Manipulation, and Appearance. Each begins at 1, and she has 5 points to spend. Assuming an even spread, I roll for her lowest Attribute in this category, and get a 10. This means I don't go with the spread, instead rolling for each point.

She's actually relatively average in her Social Attributes, having a 2 in both Charisma and Manipulation (though "2" isn't bad in Vampire, just not exceptional), but she is positively stunning with an Appearance of 4.

Mental is the Tertiary Attribute category, for which she has 3 points to spend. I roll a 3, and so these points are spread out evenly, 2 total in Perception, Intelligence, and Wits.

I want to know a bit more about her before I fill these out, so I put these on hold for now.


Step 4 Advantages
Disciplines. 3 Her 3 Disciplines points are spread evenly among the Brujah's Clan Disciplines of Celerity, Potence, and Presence. Each are set to 1 each.

Backgrounds. She has 5 points to spend in Backgrounds, and I roll for each.
Point 1 2 Contacts
Point 2 9 Retainer
Point 3 4  Generation
Point 4 10 Status
Point 5  2 Contacts

She knows a number of people who can get her information--useful for an Investigator. Her Status is interesting, though. It's not terribly high, but more than most neonate vampires possess. She's someone in the town that others know about, that's for sure. Perhaps she's an enforcer for the Prince?

Her totals work out to Conscience 4, Self-Control 3, Courage 3. She's above average in discipline and will, but her conscience and righteousness often direct her.


Finishing Touches
Her Humanity is the total of her Conscience and Self-Control, and so begins at a 7.  Her Willpower equals her Courage, for a value of 3.

I feel like I have a decent sense of who she is. A rough and tumble type, probably an ex-cop. In fact, being Police was probably the "family business," and one she joined to both the pride and dismay of her father. She believes in the rules, but with her Conscience of 4 it's because she believes it's the best way to for everyone to get the justice they deserve. She might be a tad naive, but she does believe that the system works most of the time, and when it doesn't it's due to the actions of "bad apples"--and she hates bad apples.

Her combination of Traditionalism and Justice made her particularly appealing to the Prince's "Sheriff," and she was embraced both to be one of his "Deputies" and a desire for her to be their lover (Appearance 4, after all). The former she has embraced with gusto, hoping to control and regulate the depredations of the other vampires, whose violence is often barely contained. The later, she has constantly rejected.

Now that I know that, I fill in her Abilities. She has 13 to spend on Skills. 2 points go to Drive (and this might go up, as tailing people is a key skill for an Investigator), 1 in Etiquette (she knows how to behave in front of the "bosses"), 3 in Firearms and 2 in Melee (from police training), 1 in Repair and 2 each in Security and Stealth.

She has 9 points in Knowledges.  I immediately put 3 in Investigate and 2 in Finance--following the money is a useful skill to have. The remaining 4 go to Bureaucracy, Computer, Law, and Linguistics.

She has only 5 points for Talents, and so I need to be careful. 1 point goes to both Brawl and Athletics. She also gets 1 in Intimidate, and the remaining 2 go to Streetwise--a good Investigator needs to have an ear to the ground.

She has 15 points of freebies to spend anywhere to help round her out. First, I spend 5 points to increase her Manipulation to 3--she knows how to play people. With 10 points left, I need to be careful. I would love to get her some more Celerity, or even boost her Presence, but for now I think her Abilities need to be worked on. These will cost 2 points each, and I increase her Investigation to 4, and her Brawl and Intimidate to 2 each. With only 4 points remaining. I spend 1 to get her a Resources Background of 1 and the remaining 3 go into the all important Willpower, which brings it up to 6.

Finally, she needs a name. I roll on the tables from Everyone, Everywhere. and get Meagan Hanson. Though she just goes by "Hanson." She was a Police Detective, as her embrace forced her early "retirement." Her Retainer is her former partner, Gina Adams. Gina knows what Hanson is, and is helping her out of her own free will--she now knows (or thinks she does) what is really going on in the shadows, and sees her partnership with Hanson as just policing on a different level. The Prince would normally never allow an uncontrolled human to know as much as Gina does, but Hanson's position as one of his enforcers grants her special liberties--though Hanson is responsible if anything  happens with her or if Gina does anything that could be construed as "out of line."  I see Hanson as looking similar to Stana Katic--mainly because she played a Detective in Castle, and a vampire in The Librarian. 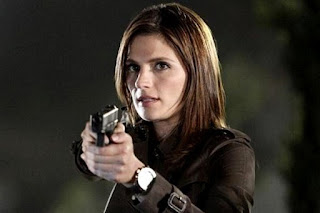 Her "Personal Masquerade" is as a licensed Private Investigator. They have few actual clients, and she is mainly kept afloat by a retainer paid out by a law firm controlled by the Prince.  Her Contacts I decide are O'Leery, a friend who is still on the force and Dusty, a small-time dealer and professional snitch. Her Haven is the basement of the offices of "Adams Investigations." Named after Gina to help keep the vampire out of the picture--Gina is the one who can operate by day, after all.

Finally, there's the question of her sire. I know little of this character, and so I roll the following.

Is Hanson's sire male? 86 No.
I roll on the Everyone, Everywhere list for "Pulp/Noir Nicknames" and get Gypsy.
I decide that Gypsy was part of the Prince's coterie back in the day. About 10 years ago, they launched a coup and seized power in the city. I could go more into the history and politics of the City, but that's as far as I want to go for now. I want this to emerge in play. 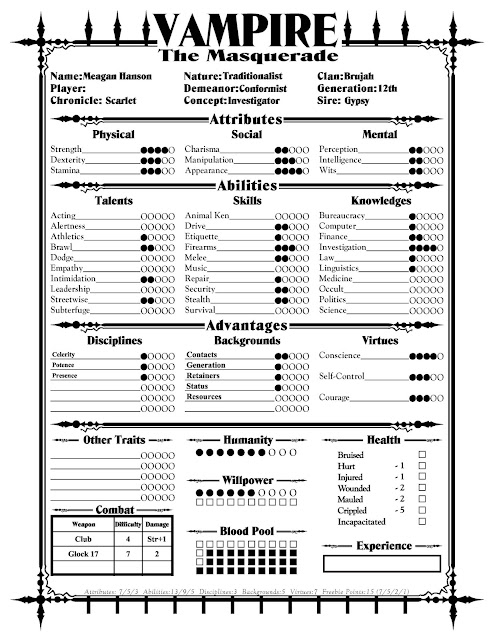