Whenever I think I about "experience points," they always strike me as being odd things.  Thanks to video games, they're pretty well baked into the popular concept of Role-Playing Games, even though they're not really required for them. I mean, you have games like Amber or original Traveler that have no Experience. Or games like Fate (where players can adjust skills between sessions) or Call of Cthulhu (where skills are improved as a result of checks and rolls), both of which all for character progression or change without the need for "experience points" per se.

But, when it comes to player direct games, XP can be an incredible tool. It allows the players to know what the goals are, to work independently toward those goals, and to make key story decisions on their own term, without requiring the Game Master to define and pace the story. The classic example, of course, is Dungeons & Dragons. In the original game, players gained XP for each Gold Piece they retrieved from the dungeon. And, in fact, they could easily gain far more Experience from treasure than they could ever hope to attain through killing monsters. Because of this, the emphasis was often placed on minimizing combat, and figure out clever ways to get the treasure without bloodshed. And if bloodshed was inevitable, the players would fight as cunningly and as brutally as they could imagine.

But still, the choice was theirs. Stay on Level 2, with the "appropriate" dangers and rewards? Or, head back up to Level 1--the risk is less, but so is the potential treasure. Brave Level 3? It's doable, if they're smart or lucky. Skip it and go strait for Level 5? The risk of death from any conflict there is absurdly high, but even the brief raid my bring more rewards than anything else they've heard of so far. The choice is theirs. 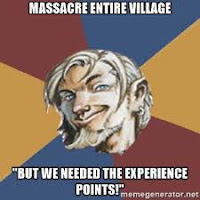 And that's where XP can work--the players know their goal, and can take the risks as they see fit to attain it. And that judgement can impact roleplaying. Two of my favorite computer games are Star Wars: Knights of the Old Republic and (to the surprise of none) Vampire: The Masquerade Bloodlines. KotOR does the classic video game "you get XP from killing foes"--which means that my Lightside Jedi Councilor spends an inordinate amount of time stalking through Sith Bases, executing all possibly survivors.  My insane Malkavian in Bloodlines, however, goes out of her way to spare people--she gets her XP for completing quests, not killing random security guards. And, in fact, she often gets bonus XP for not killing anyone. The rewards influence action.

For Ravenous, I'm not planning on precise stories. The action will be player directed, and as such I feel the Experience system should be part of that. Vampire typically gives out XP for such concepts as "learning" or "roleplaying" or "wisdom." Well, my players don't really need encouragement to "roleplay"--they do a damn fine job on their own. And wisdom? Yeah, if they had any then "eat our way to the top" wouldn't be the Chronicle concept, so the base system doesn't work.

Instead, it's all about the diablerie. The characters gain Experience for killing and diablerizing a target, and so increasing their power. Everything else--gathering resources or allies, gaining information, stalking the prey--is secondary to this one, overriding goal.  As such, here's the Experience rules for Ravenous.

Per Session: 1 XP per session.
Diablerie: per act of diablerie, the character gains 7 XP + X. X is a variable based on how much you improve your Generation (see chart below).  Go from 13 to 12? That's a +2 Bonus, or a total of 9. 8th to 7th? That's +24, for a total of 31.
Others: so long as ANYONE in the Pack successfully diablerizes, then everyone gets a bonus of 3 XP.  This only applies to those who DON'T diablerize and one counts once. If there are three players and two of them commit diablerie, the third only gets 3 XP, not 6.

Chronicle Goals: The characters have heard of the forbidden "Ritual of the Bitter Rose"--successful discover of this forbidden magic will gain them additional XP. As will others, as they are discovered and attained.

Family: Killing ones sire, and others in the same bloodline, gains the character 5XP, in addition to those listed above.