The tools are all in place. Now it is time to begin the game.

Story Setup
Theme: 3 Conspiracy. Powerful forces are aligning together for nefarious ends. Well, more nefarious than is typical for vampires.


A Target aspires to advance their business or status but an Antagonist opposes them Draw the Target and choose how they are trying to advance themselves. Either draw the Antagonist immediately or spend an Investigation scene discovering who is causing the obstacles. Scenes revolve either around trying to help the Target’s goal or trying to prevent Antagonist sabotage.

With Vampire, this could mean a number of things. From a neonate Toreador hoping to impress the clan with a new masterpiece, to an up-and-coming Ventrue looking to make their mark. Or it could be a more established vampire, looking to expand their turf or gain an edge on the rival. Really, any number of things, but the fact that there is a "conspiracy" involved tells me that it is something more than run of the mill Kindred politicking.

The setting is relatively blank, and so I have no idea who could possibly be involved. I decide to focus initially on the Target--who is it that is attempting to advance their status, how do they wish to advance, and what could possibly be thwarting them.

I pull out a copy of U.N.E. and decide to roll for the Target, getting the following:


Lively reverend who is much weaker than you and whose motivation is to advise happiness, refine love, and create justice; who speaks of friendly reports and is focused on your antagonist.

This...this is not something I expected. My first thoughts were of schemers and manipulators, not someone who is focused on happiness, love, and justice. Let alone one who is weaker than Hanson. And my initial response was to discount the rolls and start again. But the more I think about it, the more I rather like it. What if the Target was seeking to "advance their status" wasn't some wanna be bad ass, but instead someone seeking to bring the "Light" to vampires? Someone hoping to make their future better. Someone, perhaps, offering a vision of Golconda and the promise of peace for all of Caines children? Such a prophet would be a seen as a threat to certain powerful vampires, though direct action may be unwise.

So, let's find out more about this "Lively Reverend." I already have a basic setup concept in place for the character. Keeping this in mind, I then run quickly through the Random Vampire setup (see an example for how it works here).

This is what I ended up with.  Spending her freebies on Virtues, Willpower, and Humanity. 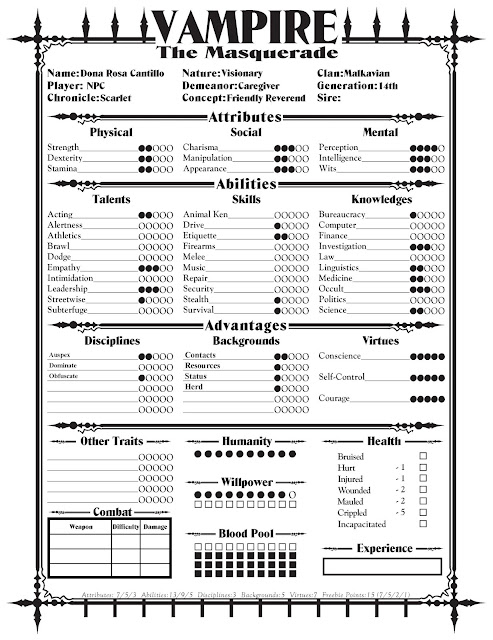 The remaining issue is her derangement. All Malkavians have one. In 1st Ed Vampire, you can actually gain and lose them pretty easily, but for the Malkavians they have one that is permanent. I roll on the charts in the base book and get the following for Dona.


Moralistic: You believe yourself to be highly moral and virtuous, and insist upon the highest standards of morality. Yet you still have problems with the weakness of your own heart. You are arrogant and demanding that others correct their deficiencies, but tend to ignore your own weaknesses.

Sounds like she is exactly who she appears to be--a decent and good person who is seeking to make the world a little less dark, and help find those who have been lost.

The second step in the setup is "Why is Hanson involved in this plot?"

I had planned on rolling on various questions for Mythic and the like, but I realized I would be fighting against my own initial instinct. So, Hanson is involved for two reasons--the first is her job. She's involved to keep an eye on things and make sure nothing gets out of hand. The second, she finds herself being drawn to Dona's message, despite her best efforts.

The Elders of the City are concerned about this new Kindred, this wandering holy woman. They're leery of anyone carrying on about "redemption," as such thoughts can often turn to rebellion and chaos. But they're also worried about her, specifically. She seems to be legitimate--naive, perhaps, but not a scammer or a liar.  But why is she here, in this city? What is she after? Who encouraged her to be here? Who profits from her presence and what might it bring about? If she's on the level, then who is pulling her strings? And in the mean time, their concern grows, as more vampire begin to join her congregation.

So, Hanson has been keeping an eye on Dona, who she meets with, what she's up to, that sort of thing. In the brief time they've known each other, Hanson has started to feel some cracks in her normal icy exterior. She had resigned herself to her fate as a monster, but now a faint hope is starting to break through.

And with that, we're ready to start the actual game here!