The World of Midnight

The best way to describe the Midnight Setting is to say “imagine a world in which Sauron won.”

Izrador, The Shadow, the god of evil, was cast out of the heavens by the other gods and fell to the planet Aryth’s continent of Eredane. As he fell, he cast a veil between the mortal realm and that of the heavens such that the gods who betrayed him cannot pierce it. There he began to wage war on the good races of the land:

The Humans
Dorns - The original human inhabitants of the continent, they most closely resemble the vikings - tall, lighter skin tones, gruff. They’re hardy folk most at home in the colder climates who revere their ancestors and always fight like their backs are against the wall.
Sarcosans - Mainly claim the lands in the South, they typically have brown or black skin, black hair, and are much shorter than their neighbors to the North. Many choose a nomadic life, and consider their horse to be practically family.
Erenlanders - Mixed heritage of the two other races, these are mostly found in the center of the continent. Being of both Dorn and Sarcosan descent, they are typically more diplomatic and build the figurative bridges that bring the humans together.

The Fey
Dwarves - Typical Dwarves from your AD&D games. They’re found in the massive Kaladrun Mountain range in the East.
Elves - Wood Elves live in the center of the massive Erethor Forest to the West and are ruled by their queen, practically a goddess in her own right. Snow Elves are tacit and stolid, living in the frozen north of Erethor. Jungle Elves live in the swampy south of Erethor and are almost feral, and quite mysterious.
Halflings - Shorter versions of elves, living in the southern Erethor Forest alongside the Jungle Elves.
Gnomes - Business minded short folk, typically found manning shops or trade barges and looking to make friends of everyone.

Unfortunately for these races, Izrador ultimately won. Izrador’s intent is to gather all the world’s power unto himself, pierce the veil he created, and destroy the other gods to rule all creation. To do that, he uses his clerics, called Legates, and the monstrous races that answer to him, the greatest in number of which are: orcs, oruks, and goblinoids to subjugate the humans, halflings, and gnomes. The dwarves and elves with their innate magic ability are outlawed and are hunted and killed on sight.

Izradors temples, also overseen by Legates, contain a pool full of sacrificial blood called Black Mirrors that drain the land of its magic and funnel it into Izrador, as magic is the fuel he truly needs. He has also created spirits of magic, called an Astirax, which can sense magic spells and effects to accompany his Legates as they hunt all magic users and either turn them to Izrador’s cause or sacrifice them so their magic can go to the dark god.

A side effect of the veil Izrador cast is that the dead can no longer leave the plane on their path to the afterlife. As such, it is far too common now that the dead will rise back up as Fell and plague the living as they seek to consume as much living flesh as possible to maintain their own bodies. As if the living monsters and hateful Legates weren’t enough to worry about.


Unless you’re a member of the Shadow’s forces, weapons are illegal. Most books were either confiscated or destroyed, and thusly almost the entirety of the population is illiterate. In this world, being a PC is accepting the role of underdog and will likely result in your demise. 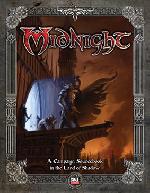 Players Commentary: Midnight is a freakin' amazing world, and just about a dream come true for any "dark and desperate" style of game. It's out of print, unfortunately, but PDFs are still avalible through Drivethru. In addition, as a D20 setting, much of the information is open source, and available as an SRD at Darkness Falls. Most of the posts in this series will be written by the GM of the campaign. I'll be trying to keep my own commentary to these brief notes at the end. While we first started playing in Midnight way back in its 1st Edition (which was made for Dungeons & Dragons 3rd Edition. Not 3.5. 3rd. The current campaign, though, started off in 2013, and lasted for roughly a year. About a year ago, we picked it back up.
at October 12, 2017