Worse, very little is actually explained in the rules. I actually had a bit of difficulty making a character, despite having played D20-based games more or less continuously since 2000. There's no example of character creation, not are there any sample characters you can compare yourself too. Well, there are some, but they're all relatively high level, and as such don't help much when figuring out how to make your first. I actually had to go to the publishers forums  to find a pre-existing character so I could confirm my math.

All in all, HWM is a disappointing game. Many rules are missing, and those that are present are poorly explained. The powers are generic and sparse, and by the time I finished character creation, I was already dreading playing it.

But, I pressed on to the CBA add-on, which was the part I was truly interested in. Much like the base game, this suffered from poor explanation and writing. I had the base, as well as various add on "Mission Books." Each "Mission Book" has a series of short scenes and adventures, but each one of these requires the character to meet certain prerequisites, generally with some sort of "status" trait (Reputation, Vigilante, Do Gooder, etc.) My starting character had none of these.

Looking at the forum, it appeared as if I had to start with the base random tables, which comprise the bulk of the CBA book. In short, you start an "Issue" (which I THINK is just their term for a story/session, but it might have a more significant meaning I am unaware of), and roll against the tables. Each result directs you to sub-tables, which gives you a Skill Challenge. Succeed, and you gain the listed rewards. Fail, and, well, you fail. To explain more thoroughly, I'm going to do a quick recap of Issue One for my character, The Ray.

The Ray is an Enhanced Human, who has bonded with an alien crystal. He is an Energy Manipulator (that's his class), and he has the powers of Energy Ray (I THINK it's a Ranged Attack and does 1d6+1 damage) and Energy Field (+4 to his AC when activated). I begin with "Issue 1" and start rolling on the tables.

17--Organized Crime. 11--Drug Deal. 1. There's a drug deal going down, and the Ray needs to make a Climb check of DC 18 to catch the mobsters. Climb is NOT a class skill for Energy Manipulators, so I roll a d20 and add my Strength modifier of +0. I roll a 12, and fail. Now, in HWM you can attempt a reroll at +2 difficulty, so I try that and still fail.

(note, I think I screwed this up. There's three options for the Drug Deal scenario, and I thought it was a d3 thing. Actually, I think you're supposed to CHOOSE your tactics here.)

16--Street Gang. 8--Street Thugs. A bunch of thugs area standing around being all thugy. I could watch them, but I decide to swoop in an Intimidate them (DC 14) to let them know I'm out there. Fortunately, Intimidate IS a Class Skill for Energy Manipulators, and I get a 19. I get 40 XP and increase my Vigilante stat by 1.

10--Informants, Allies, Contacts. I don't have any, so I instead spend the time increasing my Reputation by 1.

3--Quite Night. Time to myself, as I have no allies or the like. Instead, I take it easy, and gain 40 XP and +1 to my Personal Life score.

10--Informants, Allies, Contacts. Now that I have SOME ranks, I can decide to do a mission.

I open the the Mini-Mission Book and go to the contacts. There's a number of contacts listed in the beginning of the book, each of which has a mission (or several), but each has a prerequisite in either previous missions or various social ranks. Since I have a Reputation of 1, I can talk to Lou the Cab Driver.   He points me to the dock where a mysterious alien ship has crashed. So, I head over there to check it out, as any good super-hero would.

There, I meet an odd human looking alien robot. There's a Sense Motive check to talk to her, and the DC is pretty low (12), but Sense Motive isn't a class skill, so of course I fail. Most of the text assumes you pass and can vaguely communicate with her, but The Ray can't, so he just tries to calm her down. Suddenly, an alien drone attacks! The robot should function as an ally for the PC, but that assumed you made the skill check. I didn't, but it's my game, so I rule she helps me out and grants me a +1 to all checks. NOTE: I'm almost POSITIVE this is wrong, but they don't provide stats for her, and allies give you bonuses to your rolls, I think?

First, I start with Initiative. The Ray gets a 19 and the Drone gets a 10. Ray goes first. 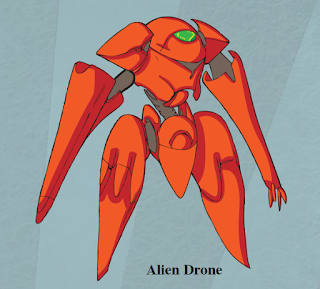 Round 1
I decide to blast the alien thing with my Energy Ray. Now, again, I'm not 100% sure how all this works, but I believe I need to roll a "Power Activation" roll to start the power, then I need to make a Ranged Attack with it. No problem, I have Power Activation as a class skill, and of course roll a 1.

Round 2
To be safe, I decide to try and turn of my Forcefield. With modifiers, I roll a 9 and fail. So you know, the DC to activate my powers is 11!

Drone rolls to shoot, gets an 11, and misses.

Round 3
Finally succeed on Power Activation roll and let lose with my Energy Ray. It's a ranged attack, and I get to add my +3 Dexterity modifier to it (again, I THINK). Still, I get a 15 total, but the Droves AC is 16. Miss.

Drone rolls to shoot, gets a natural 20. I'm pretty sure that's a threat. I roll again to confirm it, and get ANOTHER DAMN 20. That's a crit. So, I roll the Drones damage of d6 twice and get 8. The Ray only has 6 Hit Points, and so dies.

In theory, if I had a Hero Point, I could miraculously survive, but you only get those for completing certain missions. Which I hadn't yet. So, thus passes The Ray.

Given that, my opinion is divided. I don't really like Heroes Wear Masks. I think it's poorly written and poorly explained. Worse, it's tied to Pathfinder. While Pathfinder has it's pros, it's a damn lethal system for solo play, especially at low levels. Basically, I had a couple of skill based encounters, then one fight against a decent but not overwhelming foe, and I died a terrible death. This is how, like, 80% of my D20 based games go. If you decide to stick with it, just go with the Detective class (they're the skill monkeys) and use a gun.

On the other hand, I think I kind of dig CBA. At least so far. I'd probably want to tweak it a bit, make bigger scenes out of the vignettes, but I think I'm starting to see where they're going with the system, and it's pretty interesting. But, I think I would use a different system than HWM. Mutants and Masterminds is the obvious solution, but if you're willing to covert between D20 and your favorite system on the fly, I'd go with whatever one you like.

Heroes Wear Masks and Comic Book Adventures were written by Robert Hemminger and are published by Avalon Games (http://www.avalon-games.com/)