It’s Day 1 on the New Year, New Character Challenge. As per my outline post, I had no idea which game to start with. I headed over to my favorite online die roller (The old Wizards of the Coast one) entered in a custom “D31” and got a 28, which results in Mechwarrior. 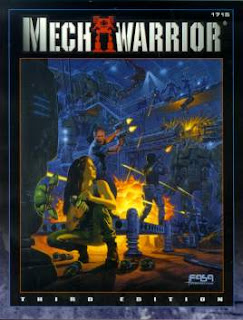 Mechwarrior is an old RPG put out by FASA as part of their Battletech line of tabletop games. In the 1st and 2nd Editions of the games, the assumption is that the PC’s are “mechwarriors”—pilots of the huge, humanoid war machines that dominate the battlefield of the far future.  Later editions aren’t quite as tied to the concept, but it’s still pretty core for the game. Of course, the name “Mechwarrior” is probably more well known for the series of videogames, rather than the table top RPG.

I’ve run some Mechwarrior in my life, though oddly none of the PC’s have ever actually been a mechwarriors—they’ve been criminals, scholars, cops, and relatively ordinary folks trying to survive in a war torn and broken future. I actually personally prefer the 2nd Edition rules, but the 3rd Edition (now known as Classic Battletech RPG and owned by Catalyst Game Labs. I think) has a fun “life path” system which seems ideal for the “create a bunch of random character” thing. And given that, I will not be using the UNE for this character, instead allowing the life path to guide me.

A players goes through a "lifepath" for their character, determining their background. This backgrounds provides certain points which will later be used to buy skills, as well as adjustments to attributes. At the end of the path, the player spends various points based on these values as they finalize their character. So, for example, a +1 from the lifepath translates to a +0 skill (barely trained), while a +3 will give me a 1 in the skill (competent). The system itself uses 2d10+Skill to resolve issue.

First, I need to pick my characters Affiliation, the "nation" that my character hails from. This is a choice, so I'm going to roll against a chart I make:

I roll a D12 and get a 7, so I come from the Taurian Concordant, the largest and most stable of the Periphery Realms. English is the primary language of the realm (Spanish and French are secondary). I have a -1 to my Charisma stat and a +1 to my Edge (roughly, "luck"). I also get a +1 to Negotiations and a +1 to either Rifles or Pistols. I roll, and pick Rifles. I also gain the trait of "Quirk/Stubborn."
I get 3 points for Language/English, 3 points for Affiliation Languages (I spend 1 on French and 2 on Spanish), and 2 points for Perception.
Next, I need to determine my Early Childhood. This is another choice, so here's the chart of the ones I can pick from, as a citizen of the Concordant:
I roll a D6 and get a 5. I grew up on the streets of a major city. My parents were the "working poor," or unemployed, or just gone. My attributes are modified with a Body of -1, Reflexes of +1, Will +1, Edge +1, and Social of -1.  I also gain poverty as a trait, and a -1 penalty to my language skill in one of my languages (I pick Spanish as 1 or 2 points gives you a +0 at the end, while 3 gives you a +1). I also get a +1 to my Scrounge skill and a +2 to my Streetwise/Taurian Concordant. I can pick either High School or Street for my next path (Late Childhood), but first, I need to roll for an Event.
I roll and get 2D6 and get a 6, which results in "Ran a thriving three-card monte operation [Gambling
+1]." I note that on my work sheet, and need to decide where to go next. I decide on 1-2 High School, 3-6 Street. I roll a D6 and get a 2 for everyone's favorite time of their life--HIGH SCHOOL!
Being in High School gives me a contact as a trait and the following skills: Academic/Any +1, Computers +1, Interest/Any +2, Streetwise/Affiliation +1. I leave the Academic and Interest unassigned for now.  For the Event, I again roll 2D6 and get an 8 for "Avid participant in extracurricular activities [Acting +1, Art/Any +1]." I now need to pick between Trade School, Technical College, Police Academy, Military Enlistment, Ne'er Do Well, and Civilian Job. This is another decision point. Part of me wants my budding artist to follow his dreams and get off the street, but the power gamer in me wants to go Military or Police. So, I decide to again roll a D6 and see where he ends up. I roll and get a 5--he's going to follow his dream, and don't need no education!

I also realize that he needs a name. I flip open the Everyone, Everywhere List and decide he'll have a French first name and a Spanish last name. I roll two percentile and get 98 and 3. "He" is now Franck Aguilar. Franck is 16 years old and setting out on his own.
Since I went with "Ne'er Do Well" I skip Step 3 Higher Education and move on to Real Life. I figure I'll bring Franck to his mid-20's before his adventuring career begins.
This lifepath takes 1d6 years--so, Franck spends 6 years as a wanderer. He could be a criminal, or unemployed, or something else. Whatever he does, he doesn't quite fit it. I figure he'll start trying to be an artist or an actor (he got a standing ovation for the school play!), but probably need to be a bit more...ruthless just to survive. He gets a +1 to his Edge, +2 to Streetwise, and +1 to two other skills. None improve his artistic nature, so I grab Gambling (to make a living) and Blades (he needs to be able to defend himself somehow). For my event, I roll a 6 and get "Convicted of a minor crime (player determines whether the character is actually guilty) [Streetwise/Any +1, add two years to the time this path takes]." He's definitely guilty, and this goes from 6 years to 8. This does bring him up to 24 which is right against my "mid-20's" goal, but I decide to roll once more. I can pick either Military Enlistment or Ne'er Do Well again. I decide this guy is going to stay a Ne'er Do Well.
Repeating the path is similar to doing it the first time, with some slight differences. You still get the skill bonuses (Streetwise, Gambling, and I pick Appraisal this time), but I don't modify my attributes. Also, I get a -1 to my Event Roll. So, this time I roll 2D6-1 and get 11. AGH! Finally roll decent, and it's with a penalty. Still, an 11 gives me "Lady luck smiles; you make a living playing poker [EDG
+1, Wealth (3), Good Reputation, Gambling +2]." The Wealth trait overrides my poverty trait, so I end up with Wealth (2) instead. Also, my Edge has already been modified up to 8 (the maximum), so this bonus does me no good. Such a waste. Oh, I forgot to roll for how long this Path takes. I roll a D6 and Franck spends 4 years as a professional gambler. He is now 28, which is the upper limit for "mid-20's," so I end his "background."
Assigning Attributes and Skills

Now I need to actually "create" Franck. I begin with his Attributes--remember all those "+1 Edge" modifiers I got? They didn't actually improve my Edge attribute, instead it merely adjusted the threshold for that attribute. A player begins with 50 points to spend on Attributes. For those up-to or below that threshold, each level is 1 point each (so, to buy a Charisma at 5 would cost me 5 points), to go above that would cost me 2 points each (so, to get a Charisma at 7 would cost me 9 points).  1 is the lowest an Attribute can be, while an 8 is the max for "normal" characters.

My threshold for Edge is an 8, so I immediately spend 8 points and max that one out. Before I look at the others, I want to look at my Social Score. My threshold of 5 allows me to get as high as a Baronet (lowest level of nobility), but that's way to high for this character. I decide to go with a 4, which makes him Upper Class--he's a successful gambler, after all, and stays in nice hotels and wears fashionable suits, even if he doesn't have much in the bank. Then, of course, there is Charisma. My threshold of 5 rather stinks, as "charming rogue" seems to be Franck's thing. I want it to be at least a 7, which is Remarkable, but that cost me 9 points. I think it's worth it. 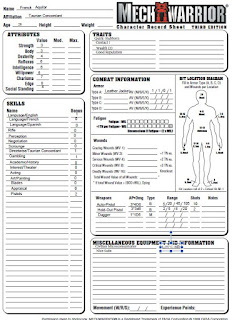 But this leaves me with only 28 points left, and 6 attributes to buy. Anything of 3 or less will face some degree of penalty, so I need to be careful. Willpower and Reflexes are pretty key for this guy, but so is Intelligence. I spend 18 points to buy all these up to 6.  This only leave me 10 points. I grudgingly accept the 3 in Strength and Body and a 4 in Dexterity, and decide he's something of a "Doc Holiday" type.  Sickly, but charming.

Next I need to do skills. As I mentioned, the pool of points you get in the Lifepath don't directly translate to your skills. Instead, you use to buy those skills. So, if you have 1 from the lifepath, that gives you a skills at +0. You need a 3 to get a +1. But, what if you have a 2? All the "spare points" go into a pool that you can use to purchase other skills you may want.

After calculating out my skills, I only have 7 spare points. I decide to grab "Pistols" at +2 for this, as my gambler needs someway to defend himself, and blades won't be enough given his poor strength.

With the "Wealth" Trait, I have a 5,000 C-Bills to purchase gear. Most of is combat focused, and therefore of little interest to Franck when the game begins. He's a wandering gambler, and his equipment reflect that. First, I grab his weapons, getting him a basic Auto-Pistol, Hold-Out Pistol, and Dagger. Armor doesn't really seem to fit him, so I go with just a basic Leather Jacket. All that only costs me 128 C-Bills. I buy a civilian micro communicator and spend 500 credits on clothing.  Franck still has 4,197 credits left to spend once the game begins.

I probably shouldn't have done Mechwarrior for my first character. Character creation in that system is very fiddly and...odd. The "get points in Life Path and spend them later" is interesting, but a little wonky. This probably should have been a later post.

Also, Mechwarrior 3rd is wildly unbalanced. With different choices and different rolls, I could have easily had a character that was a far more "powerful" and skilled. In one of the games I ran, I had a barely competent cop/PI, an academic who was amazing at a few Academic and Language skills (and nothing else), and an Ex-Special Forces/Super Spy who had more skill points than the other two put together (and was as good as if not better than them in a lot of their skills). Other characters could start as Nobles with vast estates, or merchant princes with their own space ships. Or, like Franck, just a regular guy.

Which is actually something I like about the game. I'm fine playing a "Spec Forces" game with it, but I really enjoy running and play "regular folks" dealing with either petty and local issues, or those confronting Lovecraftian monstrosities. By default, there are no aliens in Mechwarrior, which I think makes it a natural fit for Cosmic Horror.