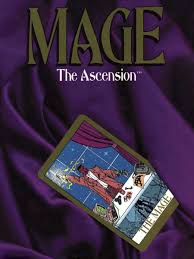 Mage the Ascension is a "Storytelling Game of Modern Magic." It is, in many ways, a successor game to both Ars Magica and Vampire: The Masquerade, so we are treading fairly well worn ground when it comes to creating a character. In it, players take the roles of "awakened" Mages, seeking both to understand the true nature of reality as well as to share that understanding with a world that not only fails to understand them, but which can barely tolerate their existence. They are locked in a millennia old war against the Technocracy, a group that desires to control reality and humanity. It is a war the Traditions (the disparate groups of mages the players belong to) are losing, and reality itself rejects their feeble attempts to change or alter it.

It was the first of the White Wolf "World of Darkness" books that hadn't been released when I first started playing their games, and one I eagerly anticipated. I always liked playing wizard PC's and reading books about mages, and the idea of playing such a character in the "Gothic Punk" world was exactly what I was looking for. Unfortunately, I never really got a chance to play it much--just a few scattered one-shots over the years. And to be honest, most just didn't work. Or at least, just didn't work the way I had dreamed. Due to its rather "freeform" style, it is a system that, in my opinion, is heavily depended on the Storyteller. And so long as the players and Storyteller are, more or less, on the same page, it seemingly can be a wonderful game. At least, according the stories and tales I've heard from friends and co-workers over the years. I hope someday to be able to experience at least a bit of its magic for myself.

Character creation in Mage is a point based system, which means like most of these the Concept is the key decision a player must make, with all subsequent decisions following from that. Unlike GURPS, though, each step in the process has its own distinct point pool--the ones you spend for Attributes can't be used for Abilities and vice versa. Each trait is rated on a 1 to 5 scale, and most rolls are Attribute + Ability. So, if you have a Strength of 2 and an Athletics of 2, you would have 4 for a climb check. Each "dot" represents one d10 you can roll--so, you would roll 4d10 to determine success.

The unique aspect of Mage is, unsurprisingly, it's magic system. There are 9 "Spheres" of magic, representing different aspects of reality--such as Spirit, Time, Mind, Life, Entropy, or Forces. Each Tradition (the groups players can be members of, and the closest thing to "classes" the game has) are specialized in one particular one, but any mage can learn any of them. Each one allows for a variety of effects, often limited by the player's imagination, and Storyteller fiat. At worst, it allows for crazy over-powering (the infamous "turn a vampire into a lawnchair") to cripplingly limited (summon a spirit alone in a private and concealed magical "node" and get slammed with Paradox).

While there have been multiple editions of Mage over the years, I only own the 1st Edition in print. Due to my self-imposed rules for this series, I will be using that iteration.

I once again turn to the Universal NPC Emulator and Everyone, Everywhere List to help come up with the character concept. The one important difference is that a Mage character is not going to be a "regular" person. Madison, for example, was just a typical woman going through a bit of a personal crisis when a random encounter with a vampire changed her life forever. A Mage character isn't really the same--they are driven and passionate believers. They may have once been normal, sure, but a period of intense change will have turned them into someone different. So, any result would need to be interpreted in that light.

I roll on the UNE charts for Modifier and Noun and get 08 Unreasonable 04 Expert who wants to 26 Drive 40 the Church. For his name, I get 52 Nathan 78 Fuller. So, given that, I picture Nathan as a devout philosopher/theologian, who has a radical interpretation of the Divine which led him to a greater understanding of the world around him. Not contented with traditional interpretation of Faith and the world, he drove himself into more esoteric, and dangerous, studies.

For his Tradition (the magical order to which he belongs) the Celestial Chorus is the obvious choice. They are "spiritual men and women who hold a fervent belief in greater powers." Each mage also has one of four "Essences" which determines their tie to reality and how their Avatar (a spiritual force tied to them) reveals itself. I think Primordial works best for Nathan, even it's a pretty rare one in the modern world. For his Personality, I need to pick Nature (who he truly is) and his Demeanor (how he behaves). I want him to be a fairly heroic individual, so I choose Caregiver for nature--he deeply cares about others and wants to better their lives. For his demeanor, I go with Visionary...he likes to play up the wise and mysterious angle, and will often make it seem like his aid is driven by "Fate" rather than he is actual want to help people.

As an aside, I couldn't find a form-fillable sheet for 1st Ed. For other games, I've been scanning the sheet and manually editing it with Adobe, but this doesn't really work for Mage and the assigning of Dots--my Adobe knowledge is extremely limited. So, for the example images, we just have to deal with my chicken scratch handwriting. I apologize in advance.

There are nine attributes divided into three categories--Physical (Strength, Dexterity, Stamina), Social (Charisma, Manipulation, Appearance), and Mental (Perception, Intelligence, Wits). Each starts with a value of 1 and has a maximum of 5. I pick one category to be Primary (and I assign 7 dots to those Attributes), Secondary (and assign 5 points), and Tertiary (only 3 points.) Mental is an obvious Primary for Nathan, with Social being Secondary.

Like Attributes, Abilities are divided into 3 categories--Talents, Skills, and Knowledges. They are also picked on a Primary/Secondary/Tertiary basis, with 13/9/5 points respectively. Unlike Attributes, these all start at 0. 1 indicates the most basic of education in a topic, while a 5 is "world renowned master." I start picking the various Abilities I think Nathan would need. Most of them end up being Knowledges, so I make that Primary and assign it 13 points, with Talents and Skills being Secondary and Tertiary. 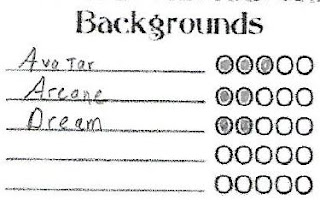 This area covers two things--Backgrounds and Spheres. Starting with Backgrounds, I have 7 points to buy the various "stuff" Nathan can begin with. Some are magical (such as his Avatar), others are more mundane (such as an Ally). I first decide to give him a pretty powerful Avatar, putting 3 points in that. I then go ahead and put 2 into Arcane (an odd ability to be unnoticed by the world at large). I place the remaining points in Dream, allowing him to tap in the "Universal Unconscious."

I then move onto Spheres, the building blocks of magic in Mage. As a member of the Celestial Chorus, Nathan begins with 1 point Prime, which controls the fundamental power that defines reality, and fuels magic. I also have 5 free points to spend on any Sphere. I put two more points in Prime, boosting it to 3. For the other 3 points, I decide, more or less on a whim, to go with Entropy, Forces, and Time, places 1 in each. My high Prime rating causes a slight issue, however. Each mage has an Arete trait that indicated their understanding of the world on a scale of 1-10. A character begins with a 1 in this, and no Sphere can be higher than ones Arete rating. However, I know I can spend Freebie Points later to increase this, so I make a note I'll need to buy at least two more dots in Arete before I do anything else.

We're almost done; all I need to do now is spend Nathan's Freebie Points and calculate a few basic values. Beginning with the "values," he has a 1 in Arete, and a 5 in his Willpower. He also begins with a "Quintessence" (roughly "Magic Points") equal to his Avatar rating of 3.  Moving on to Freebies, I have 15 points I can spend to increase pretty much anything, though at a variable cost. I need to increase his Arete before anything else and each dot in Arete costs 4 Freebies. He already has a 1, and needs a 3. I spend the 8 points on that, leaving me 7 left. I spend 2 points to increase his Investigation Ability to 3. I then spend 3 points to increase his Willpower from 5 to 8, leaving me with 2. I place these in his Backgrounds, increasing his Avatar and Arcane to 4 and 3 respectively.

I could assign him any gear that is appropriate for his concept, and I assume he has just mundane, normal gear--no weapons or armor or anything fancy. He's just beginning his adventures, and doesn't yet truly understand how dangerous the world is about to become for him.

I have to admit, I'm a big fan of the White Wolf/Storytelling method of character generation. Breaking the "point buy" element into distinct sections helps minimize choice paralysis, while still allowing for a high degree of character customization. Of course, since I've never played more than one or two trainwreck games of Mage, I have no idea how effective old Nathan would be, I still dig the game and the world around it. Here's the final character sheet. 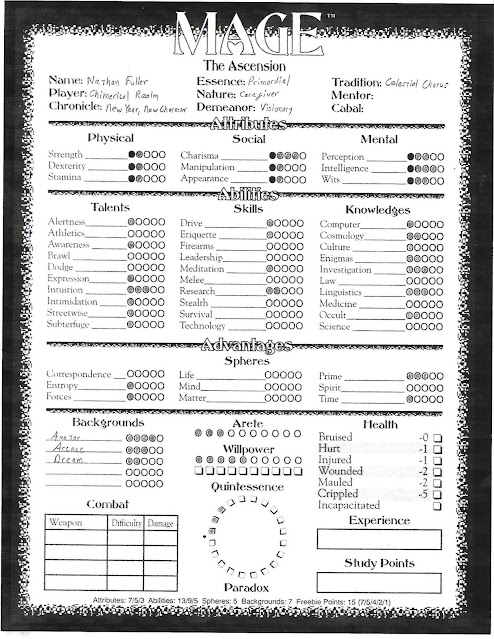