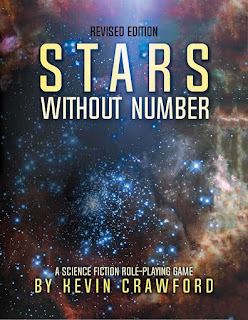 Today marks something of a landmark for my take on the "New Year, New Character" challenge. When I started, I created a list of 31 different games I wanted to make a character for. I thought of sorting them by system or theme or age or something like that, but decided to go random. Given the odd numbers involved, I had been using Wizard of the Coast's old online dice roller. I simply add in however many systems were left as a custom die and "rolled" that. I've now completed 11 of these, meaning I have 20 left. Which means I actually got to roll an actual, physical d20. I did, and got a 4 giving Stars Without Number.

Stars Without Number (SWN) is a fairly "hard" Sci-Fi game, in the tradition of Traveler. Players take the roles of mercenaries, traders, and explorers in the far future. A few hundred year prior to where the game begins, a massive catastrophe devastated all of settled space. The survivors have slowly rebuilt, and are tentatively rebuilding the old political and trade networks, but limited by much slower FTL drives, forcing the focus onto a more localized sector rather than careening throughout the galaxy. Like most of Kevin Crawford's games (including Silent Legions), the game is intended to be a sandbox for the players stories. The bulk of the book is about providing the GM with various rules, tables, and other tools for creating this sandbox, with the game being about what happens as the players set forth and explore the world around them

At it's core, SWN is derived from Labyrinth Lord/Basic D&D, with a few tweaks. The classic abilities are here--Strength, Dexterity, Stamina, Intelligence, Wisdom, and Charisma. Skills are rated from +0 (barely trained) to +4 (master), and players roll 2d6+skill level+attribute modifier against a difficulty to determine success. Each character has a Background which provides some skills, and then pick one of four classes. These are Expert, Psychic, Warrior, and Adventurer. Each has their own unique benefits and Abilities. Well, except for Adventurer, which is a combination of two of the other three. A lot of character creation is assumed to be based on random rolls (Attributes, Backgrounds, etc.), though there is an option to make decisions instead. For this post, I'll be using the random option whenever I am presented with it.

Given it's random nature, one can expect to discover your character through Character Creation, rather than having a pre-determined concept you are trying to bring to life. As such, there's not much to determine initially. At this point, I just decide that my character will be a woman and will have the name Joan Chen.

To start with, I need to roll 3d6 six times in order of the Attributes. The key part of that attribute is the "modifier" that come with it. These are comparatively lower than what you see in other games based on the same systems. For example, an 18 gives you a +2 and a 14-17 gives you a +1. Later in character creation, I will be able to set any Attribute to 14, guaranteeing that Joan will be fairly competent in her chosen field. Here's what I get:
This is a very strong set of Attributes--only two of them are below 14. I'm wondering if I should increase her Strength or Intelligence when I get the free attribute boost, but I decide to wait and see how the rest of generation shakes out.
Step 2: Background
Background will determine not only where Joan comes from, but also provide additional tables to determine her starting skills and potential other benefits. It's a 1-20 chart, so I roll a d20 and get a 2 for Clergy.  There's a number of ways to interpret this--she could have come from a "consecrated" family, or raised in a temple, or have been a lay individual who took up the vocation. Regardless, I flip over to the Clergy charts.

Joan automatically starts with the Skill Talk at a value of 0, indicating basic training. As a starting character, she can't have any skill higher than 1, so a 0 isn't all that bad. I could pick the "quick skills" listed for a Clergy, or choose two skills listed. But, the other option is to roll three times and see what we get. Since I'm defaulting to random when possible, I go that route.
First, I roll a d8 on the "Learning" table and get a 4, giving Joan Lead -0. I then roll once on the "Growth" table and roll a 6 for Any Skill. I decide to give her Shoot -0, as being able to defend yourself is pretty important.  I could roll on the Growth table again, but the various "+2" to attributes probably won't help Joan all that much, so I roll on Learning instead. I get a 8, which improves her Talk to 1. So, she's a Clergy member whose good with communicating with people, and shooting them if that fails. I'm seeing a rather militant faith, focused on maintaining the peace and bringing justice.
Step 3: Class
I decide to go with Adventurer for Joan, letting her be a hybrid Warrior/Psychic. As a Partial Warrior, she will get to pick one Combat Focus, has a +1 to her Attack Bonus at levels 1 and 5, and starts with 1d6+2 Hit Points at level 1. As a Partial Psychic, she gains one Psychic Discipline at level-0, plus Effort equal to 1 plus either her Wisdom or Stamina modifier. I also decide to change her Strength from 5 to 14.  Her Hit Points end up being 1d6 (5) +2 (Class) +1 (Stamina Mod) for 8.
Step 4: Focus
For her Combat Focus, I pick Gunslinger for Joan. This gives her Shoot as a skill (increasing this to 1), as well as allowing her to add her skill rank to damage. I pick Telekinesis for her Psychic ability. As a Partial Psychic, she only has this at 0, meaning she can only use the Core Technique for Telekinesis.  This allows her to "push" with mental force at visual range, up to her own Strength with one hand. As she levels up, she will have the option to improve this. Finally, Joan gets one additional Focus of any sort. Given the idea of "law enforcing cleric," I pick Authority. This increases her Lead skill to 1. 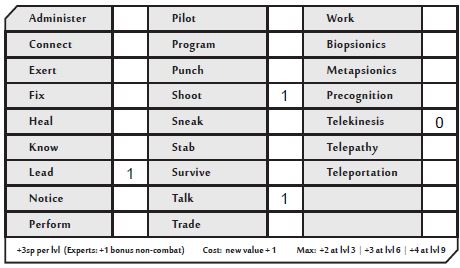 I can either pick a pre-determined "package" of equipment, or roll for a starting set of credits and purchase them individually. My default was to go with the random roll, but one of the packages is literally called "Gunslinger," which is just too perfect for Joan. I grab that.
This is also the point when I should be picking a name, calculating hit points, and the like. I've done most of these out of "official" sequence, but I do need to do Saving Throws. SWN has three--Physical, Evasion, and Mental. Each starts at 15, reduced by the modifier for one of two attributes. Since almost all of Joan's attributes are 14, this means her Saves all start at 14. Finally, I need to pick a goal for her, something that pushes her to leave her home and set out for adventure. I decide she's hunting a serial killer who escaped justice, and mark down "track down the Full Moon Strangler."
Final Thoughts
There's an obvious comparison to be made between Silent Legions and Stars Without Number. Of the two, SWN is a bit more complicated, but the system is still incredibly quick. The mixture of random tables and decisions also allows for you to discover the character as you make them, and turns the whole thing into a "minigame" all it's own. Fast, fun, and you still end up with a solid character.
Here's Joan's final sheet: 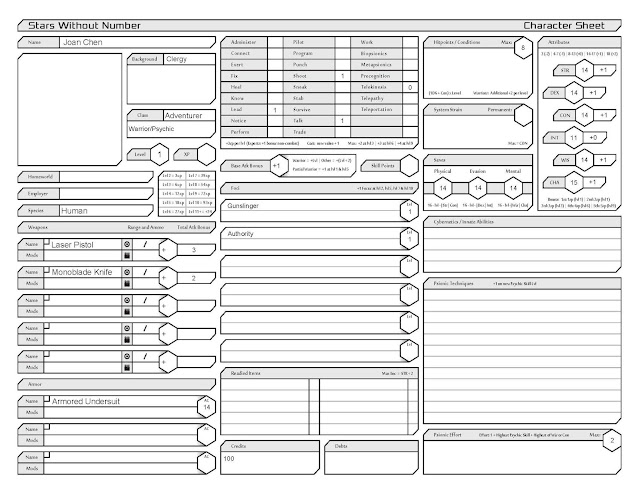 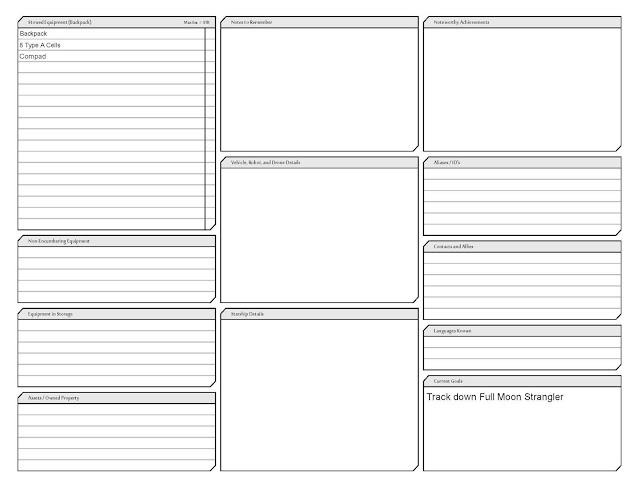