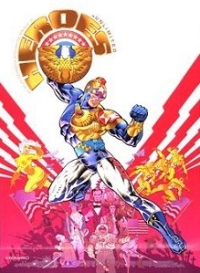 Heroes Unlimited is Palladium Books take on the Super-Hero genre. It's a "universal" toolkit to make a variety of types of heroes, though not quite as universal as it likes to pretend. Each hero is based on a specific "category" of archetypes ranging from Alien visitors to Mutants to Robots to hyper-trained Super Spies. Each has their own distinct rules, and little effort is made to "balance" the various characters. Instead, the intent is to create a distinctive character, with, much like a comic book, the balance coming from what happens in the story, rather than any sort of mechanical enforcement.

Like the rest of Palladium's books, Heroes Unlimited (HU) is derived from their Palladium Fantasy game, and follows much of the same rules. There are obvious additions, of course, through super powers, psychic abilities, alien life forms, and complicated cyborg and robotic creation rules.

Perhaps it's my nostalgia guiding me, but I have a long and deep affection for HU. I've only played or run a handful of games over the years, and I'm willing to admit the game has its flaws. Mainly, it doesn't quite reach the crazy heights of what a lot of comic books do. Instead, it's a "grounded" game, where combat is nasty and lethal, and powers, while extraordinary, are still mortal and limited. I've only played a few super-hero games, but the ones done with HU have always been my favorite.

Heroes Unlimited is very similar to Palladium Fantasy. There are 8 Attributes on a scale of 3-18 (more or less), Skills are done on a percentile basis, and combat is based around a d20 + modifier, with a unique twist that defense is rolled as well as the attack. While concept, decisions, and GM guidance can be used to create characters, there is also a number of charts and tables to be used. Given the self-imposed rules of this series, I will be using the random rolls as much possible.

HU has 8 different attributes. Each is determined by a roll of 3d6. If any is "exceptional" (16+), the player can roll an additional d6 and add it to the total. In addition, various physical skills, power categories, and super powers will provide additional bonuses. Here are my rolls:

I rolled a total of 17 in both Mental Endurance and Physical Endurance, allowing me to roll a bonus die for each and add it to the total. The natural strength and prowess (similar to Dexterity in other systems) are quite low, but not enough for any penalties. Hopefully, I'll be able to improve these later, as I would like to play a rock 'em, sock 'em super-hero.

There are two ways for a character to absorb damage in HU, Hit Points and Structural Damage Capacity (SDC). SDC, basically, represents glancing blows and flesh wounds, while Hit Points represents true, life-threatening injuries. I'll actually calculate these throughout character creation, as SDC in particular care vary based on Power Category and super powers, while Hit Points are derived from your PE +1d6. Since even my PE might change, I just make a note of how to calculate these, and then move forward.

This is where you pick your Power Category, and figure out what makes your character "super." If you have a strong concept, you can pick the Category. If you're like me, you can instead roll on a chart. I do so, and get an 03, letting me know that my character is the result of an Experiment which gave him super abilities.

I flip forward to the Experiment section of the rules. All I know is that my character gained their powers through some sort of covert and highly dangerous experimentation. It might have been by the government, private industry, or a criminal group. I might have been a volunteer, or a prisoner, or someone who was lied to. It might have been a deliberate attempt to create a superbeing, or the result of something else. Fortunately, there are plenty of charts to figure all this out. Each one is a percentile chart.

While I'm here, I make a few additional notes. As an Experiment, their base stats remain the same, and I will roll for their Education as normal. They starts with 5d6x100 dollars (I roll $1,800), and is assumed to have a car, job, apartment, and general personal possessions.  Basically, no modifications to the rest of Character Creation. I also note that they start with an SDC of 40.
Step 5: Super Abilities
Now that I know how many and what type of abilities my character possesses--One Major and Three Minor--I flip to the Super Ability section. If I had a particular character in mind,  I could pick the abilities to make sure that everything made "sense"--but "making sense" is highly over rated. I decide to roll for them, with the understanding that I will discard any that obviously make little sense. For example, given his vulnerability to radiation, I won't be taking "Control: Radiation" as a power.  First I roll for my three Minor Abilities. I roll on a percentile chart and get:
Since I rolled two flying powers, I decide to reroll Glide and get 63 Energy Expulsion: Energy. So, the character can fly and shoot energy blasts from their hands. Now I look to their Major ability and get a 34 for Create Force Fields. Each of the powers has their own suite of bonuses and modifiers, some of which only applies when being used (such as the extra attack from Flight: Wingless), and I note these on the sheet. 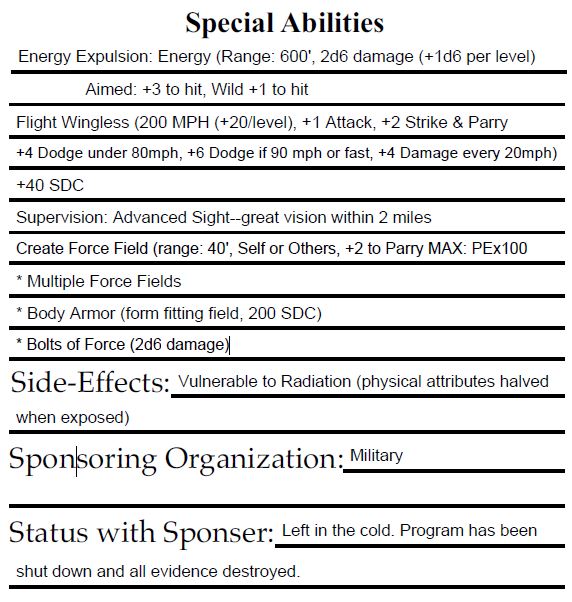 Step 6: Education & Skills
Now, I flip back to the beginning of the book to figure out what skills the character possesses. My physical attributes are still lacking, but my energy expulsion and force field makes this less important. I don't plan on this character getting involved in a fist fight any time soon. And if they did, the enemy can just waster their time batting away at my force field. Regardless of what I roll, all characters begin with Pilot Automobile, Mathematics: Basic, Speak Native Language (+25%) and Read and Write Native Language (+20%). Each skill is listed with a base percentile chance, those listed in parenthesis are added to this total. Depending on the skill level I roll, I might get additional bonuses.
I roll a 10 and get Street Schooled.  This character had no formal education, instead learning what they had from parents, peers, and themselves. I will need to spend one of my Secondary skills if I want to be fully literate (something in contrast to the "standard" rules, due to their education level. There's a lot of these one-off rules in Palladium games). I start with Streetwise (+14%), Prowl (+5%), Weapon Proficiency in either Knife or Automatic Pistol (I pick Knife, just because), three skills from the Rogue category, 2 from Domestic, 2 Technical skills, and 8 Secondary. Secondary skills are a bit of a catchall, allowing you to pick generally basic skills from most categories.
For Rogue, I chose Pick Pockets, Seduction, and Pick Locks. For Domestic, I go with Play Musical Instrument: Guitar and Sing, seeing the character as a bit of a punk rocker type.  For Technical, I go with General Repair & Maintenance and Computer Operation.
Coming to Secondary Skills, I immediately spend 1 to make sure the character is fully literate, leaving me with 7 to get them ready to be a super hero. I spend two skills to get Hand to Hand Expert, and spend one on Athletics (General), which increase my P.S. by 1, my Spd by 1d6 (2) and adds 2d4 (4) to my SDC.  With my remaining four skills, I pick Pilot: Motorcycle, Play Musical Instrument: Drums, Auto Mechanics, and First Aid. 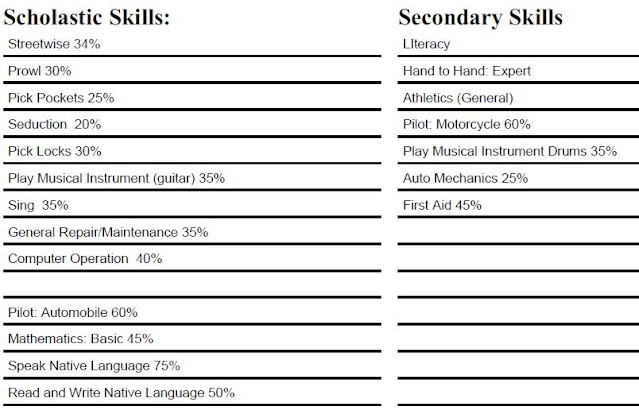 Now that I've completed my Skills and Super Abilities, I can finalize my Hit Points and SDC from Step 2. The Hit Points are PE + 1d6 (1) for 22. The SDC is 40 (Experiment) + 40 (Wingless Flight) + 4 (Athletics) for 84. This is NOT counting the 2,100 SDC worth the character can create with their super abilities.
Step 7: Alignment
Now that I have a better idea of who the character is, I decide to make them a bit darker than I initially planned on. HU has 7 different Alignments--2 Good, 3 Evil, and 2 Selfish (as opposed to Neutral). I chose Unprincipled--which is a  basically good person who is still selfish and greedy, and tends to put their own freedom over the welfare of others. Sort of a Han Solo type.
Step 8: Finishing Touches
There's a number of other charts to give the character some more background which I roll on. At this point, I also decide to make this character a woman, Rolling on the Modern Youth table in Everyone, Everywhere, I get 64 Crystal 79 Moretti.  Crystal is actually not a bad superhero name, so I have her go by that, sort of hiding in plain sight--everyone assumes that "Crystal" is a made up name, so no one associated it with her.  The game recommends characters start in their late teens to mid twenties. Most of the characters in this series have been 25, but I want to make Crystal a tad younger. She's had a hard life so far, and I want her to still have plenty of time to find a different path. I set her age at 19.
I then roll on the charts to determine the rest of her background.
Final Thoughts
Heroes Unlimited has a fiddly Character Creation, with lots of minor things to track and a whole bunch of flipping through the book to figure out what bonus you get to what. Despite that, it's actually really fun to make a character with the system. Everything has personality and flavor, and so many of the charts generate idea and concepts. It's certainly not a quick system, but it is a fun one.
Here's Crystal's final sheet.