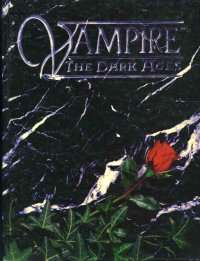 The first proper "sequel" to Vampire: The Masquerade, Vampire: The Dark Ages sends the players back a thousand years to when vampires ruled the night as lords and masters, before the internecine war known as the Anarch Revolt and before humans rose against them in the form of the Inquisition. Rather than skulking about in alley ways and cheap bars, vampires in Dark Ages exist more or less openly. Their battles are fought just as fiercely, but with fang and sword rather than false promises and gossip. It is an age of war and adventure.

To be honest, I've never been a huge fan Dark Ages. I've played, and run, a few Chronicles for this game, and they've been enjoyable. I guess it's just not what I wanted when the game first came out. The few hints we had of this time in the original book made it seem...quieter. Smaller. A time of ignorance, isolation, and overwhelming personal ties. An era when one could spend centuries surrounded by the same few vampires, believing that you were the only damned forced to walk the earth until judgement day. I've talked about this before (here)--in short, I understand why they went the way they did, but it still ended up less compelling that what I had hoped.

The Chronicles that have worked best leaned much further into fantasy than is probably "proper" for a vampire game, and I often think taking what's in Dark Ages and mixing it up with "D&D" style world might be the best solution. Just cut it off from the "personal horror" angle, and play up the monster element.

Of course, for all my "it didn't live up to my EXPECTATIONS!" complaining, it's still Vampire, and so still falls into the category of "one of my favorite games of all time." The Chronicles I've played and run may not enter into the "my dream game" category, but they are still some of my favorite games of all time, and stories of our adventures are still regularly retold around rounds of drinks. You play an undead creature of the night rampaging across medieval Europe--what's not to love?

For this post, I'll be using the 1st Edition of the game, simply because it's my preferred one, though the least played.

Vampire: The Dark Ages uses a point based system. There are a number of steps to follow for creation, with decisions made at each one, often to assign various "dots" in various traits. Each trait is rated on a 1-5 rating, with 1 being barely functioning or of only the most basic competency. In game, a player combines an Attribute and an Ability to create a dice pool, and rolls the number of dots in d10's to determine success.

As with most Point Based systems, Concept must come first, and will inform all subsequent decisions.

First, I need to make some "high level" decision--who the character is, how they behave, and what they believe. To start, I turn to the Universal NPC Emulator to help come up with an initial idea.  I get

Pessimistic Laborer who wants to Interact with Hardship

I take this to mean a bit of a "rebellious peasant," but not a violent revolutionary. Someone who believes that they and their lot are "cursed" by their condition to serve. They resent what God has decreed for them, but do not shirk from what has been commanded. In fact, they might have volunteered to take on more work, both to spare their own community as well as with the pessimists hope that things might, possibly, not get any worse. I view the character as a male, and one who volunteered to join his lords battle in...some fight over some piece of land that some other noble was supposed to inherit and, you know what, no one ever bothered to really explain why they were fighting and killing and dying of plague in the middle of nowhere. His pessimistic attitude combined with his stoic acceptance of risk and hardship appealed to his sire, who "rewarded" him with the curse. As was usual for his life, the moment he thought things were as bad as they could be, he woke up dead, damned, and forever cast from God's embrace.

At least things probably won't get any worse.

For his Clan, I decide to go with Gangrel--they are the wild and free among the undead, unbound by the civilized world most their kindred hide in. Far from the classic "savage warrior" most ascribe to them, this character is more of a stoic survivalist, often forced to do unwanted tasks for his Sire.  For his Nature (the true core of the character), I choose Penitent--he does seek a better world, but believes that he is truly, utterly damned. He does not believe he could ever be forgiven, but still seeks some version of forgiveness, though he knows such dreams will only be dashed. He has a Demeanor (attitude) of Loner.

Finally, I need to pick his Road, the "philosophy" he follows as one of the undead. I decide to go with Road of Heaven--he truly does believe in God and seeks to do his work. He believes he is truly, utterly damned, but that even as a damned soul he has a purpose in the divine plan, else why else could he exist? His duty is to harry the faithful, and punish the faithless, to use his demonic powers to bring some form for divine justice to this fallen and benighted world. I decide to set him in Hungary, and roll his name as Lazlo.

There are nine Attributes, divided into three categories--Physical, Social, and Mental. Each Attributes begins with a value of 1. I need to pick one category to by the Primary one (and will have 7 points to spread among it's three Attributes), one to be Secondary (and will have 5 points), leaving the last one as Tertiary (and have 3 points). Physical seems like the obvious choice, with a focus on Stamina for this character. I decide that Social is actually his Secondary group, despite his pessimism and inward focus. This leaves Mental as his Tertiary.

Like Attributes, Abilities are divided up into three categories--Talents (roughly self-taught or picked up as part of life), Skills (combination of training and self-teaching), and Knowledges (only learned via education). I have 13 points to spend on the Primary category, 9 for Secondary, and 5 for Tertiary. Unlike Attributes, these have no starting value, and points must be spent for even basic competency.

I figure that Knowledges are the automatic Tertiary group for one such as Lazlo. I'm a bit torn between Talents and Skills for his Primary, and I go ahead and assign a point those Abilities I think he should have. I end up assigning 5 points to each, but Talents just "feels" more right, so I go ahead and make that Primary.

As I finish assigning his Abilities, I notice that I did not put any points in Academics. This means Lazlo, despite speaking a few languages, is illiterate.

For Advantages, I need to figure out his Disciplines (supernatural powers), Backgrounds, and Virtues. As a Gangrel, he has three Clan Disciplines--Animalism (communicate with and command beasts), Fortitude (supernatural toughness), and Protean (shape changing), and I have 4 points to spend on these. At higher levels, Protean will allow Lazlo to take the form of a wolf, or a bat, and that's just...awesome. But I hate not having dots in any Clan Discipline, unless there's a very good Concept-driven why. I can't think of any reason Lazlo wouldn't have all his Discipline's, so I spend one point on each. For his fourth and final point, I put it into Protean. I want to improve this soon, and Protean 2 allows him to create Claws which are the most effective weapons for his Clan.

For Backgrounds, I spend 2 points on Generation (increasing his potential power), 2 points on Contacts (representing the various mortal friends he's made along the way), and 1 on Mentor, the creature that created him. I'm unsure who this is, so I again turn to the UNE and get Insensitive Highwayman who wants to Compel Propaganda. I see him as more of a proper rebel, one who is striking out at the world, and hoping to use "Propaganda by the Deed" to set back the changing world. I also roll on the "Hungarian" name list, and get Andor. 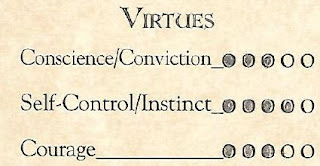 For his Virtues, I have 7 points to spend on Courage, Conscience, and Self-Control (the last two are taken from his Road). Lazlo starts with 1 dot in each. Based on his concept, I see a fairly even spread among all three--while he is a stoic, he is also motivated by caring for others, so his Conscience should be pretty high. Still, Self-Control is his highest, at 4.

His equipment is basic, a beat up sword, the clothes on his back, and a handful of coins are all his labors have left him.

I also have 15 Freebie Points to spend to finish the character. I can spend these points on any stat for Lazlo, though they're not spent on a "one on one" basis. Instead, each type has a different cost--for example, increasing Attributes by 1 will cost 5 Freebie Points, while increase an Ability will only cost 2. I spend 7 of these points to bring his Protean Discipline up to 3, which allows him to Meld With Earth, and thus gives him a safe way to sleep during the day--a useful trick for any character without a permanent home. I then spend 2 points each to increase his Melee and Stealth Skills, and then the remaining 4 goes into his Willpower, bringing it up to 7. And with that, Lazlo is ready to confront the night.

I think I might have chosen too many White Wolf/Storyteller games for this series, as the basic mechanics are pretty much the same for Dark Ages, Werewolf, and Mage, and there's not much more I can add. I still really enjoy this method of character creation. It's very customizable, with your concept driving generation, but it's also manageable--by dividing each step of the process into manageable "chunks." One problem with many Point Buy systems is the decision paralysis--how many points to spend where, and then fretting that you "wasted" those points on something else. With the Dark Ages system (and the others I mentioned), this is minimized. Your first "mechanical" decision isn't even about spending points, just figuring out "is my character more physically-inclined or more socially-inclined?" Only then do you need to worry about spending points on Strength or Stamina. And while that might lead to some hesitation, you don't need to worry if you should have spent more on Wits, or if you should drop your Strength to get more Academics or more Contacts.  Just a really top notch way to make a character. 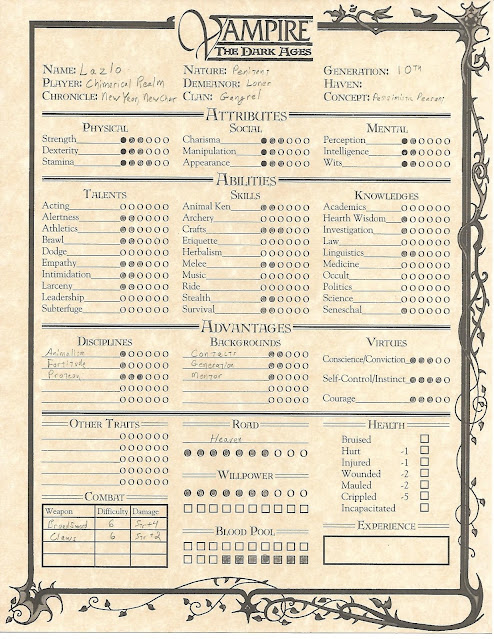