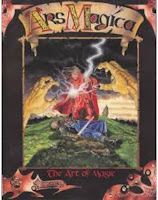 For Day 2, my rolling brings me to Ars Magica, one of the oddest and most interesting games I own, but have not yet been able to play or run. The game takes place in "Mythic Europe"--a world based on our own history, but where magic, demons, faeries, and saints work their will on the world. What makes the game so interesting is that you do not play one character, but rather a member of a Covenant. In one game, your mighty Magus might lead a troupe to engage with the trolls who live nearby. In the next, your mage might stay home to study and practice their illicit arts, while you play your friendly thief Companion, assisting another PC's magus in the rough and tumble city. In the next, you might play a tough as nails Grog, there to provide muscle and protection for yet another Magus' schemes.

For this Challenge, though, I will be limiting myself to creating a single Mage for the 3rd Edition of the game. While I own the 5th and am quite fond of it, my self-imposed rules force me to only use games I have in print, and I only have 5th as a series of PDF's I got through Humble Bundle. So, 3rd Edition it is. Let us begin, shall we?

Ars Magica has a couple of different methods to create a character--you can pick from a template, use "point buy," or roll randomly for certain aspects. For this Challenge, I'm leaning towards "roll" as much as possible, so I choose that method. Even with that, there a number of decisions I need to make for my character, so I turn to the Universal NPC Emulator, which will give a short description of a character and some idea of what they're interested in.

Prejudiced Astrologer whose motivation is to Manage the Elite

While "astrology" isn't a focus of the game exactly, I interpret this as one focused on divination and other subtle magics, and particularly focused on the nobility of the land. Perhaps they themselves come from a noble family, or other high ranking background. Their Prejudice would be extreme class prejudice--some are born to rule (wizards), others to serve them (nobles), and the rest are barely worth considering as people.

Since my last character was a male, I decide to make this one a woman. I decide to make her Italian, and rolling on the Everyone, Everywhere List, I get Silvia Curcio as her name. All I need to pick now is her age. I again go with "mid-20's," and decide on 25 as her age. This will matter later when assigning her skills.

What other games call "Attributes," Ars Magica calls "Characteristics." A character has 8, divided into 4 linked pairs--Intelligence and Perception, Strength and Stamina, Perception and Communication, and Dexterity and Quickness. With rolling, I roll a 2d10, subtracting the second from the first, giving me a potential range of -9 to +9, and I then divide those numbers within each pair, though neither can be less than -5 nor more than +5. Though anything valued at +/- 3 is considered significant. Here are my rolls:

All together, not the greatest stats, but they'll do. I decide to put the +7 into my social Characteristics, the 0 into the Mental ones, and dump the -2 into the various physical ones. Combat, after all, is what we keep the Companions and Grogs around for. 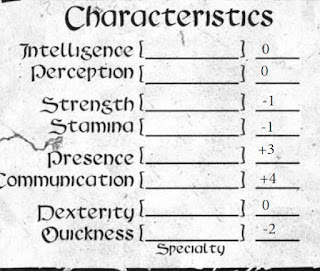 Step Three: Virtues and Flaws
For step three, I need to pick Silvia's Virtue and Flaws. There's no base point to spend for this, instead it has to even out--if you want a Virtue that costs 3 points, you need to balance it with Flaws that add up to 3.

For Virtues, I pick Gentle Gift (normally Mages creep people out, Silvia does not), Temporal Influence (she still has sway among the mundanes), and Subtle Magic (her magic does not require grand gestures to perform). This costs me 5 points, so I need to take 5 points in Flaws. I take No Sigil (she is still a mere apprentice in the eyes of the magical world), Obligation (her mundane family calls upon her for aid--they are a burden and the source of her temporal influence) and Small Frame. Which brings her Strength to -2 and costs me a Wound level. Again, Silvia is not a melee fighter.
Step 4: Abilities
Abilities are the "Skills" of Ars Magica, what you know and what you can do. Normal characters, Companions and Grogs, get skill points equal to twice their age. Mages, like Silvia, only get skill points equal to their age. In her case, 25. I pick a variety of social skills, as well as Visions to match the "astrologer" background I rolled initially. 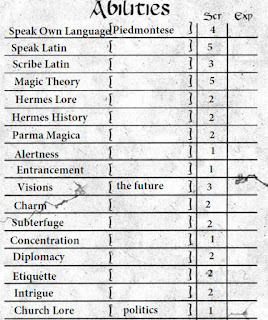 Step Five: Magical Training
Now we're onto the good stuff! Ars Magica has a fairly unique magical system based on combining various "Techniques" and "Forms" to determine what kind of magic one can cast. The book recommends that it is wiser to invest more points in one particular Form or Technique, as it's easier to improve lower Art through play.  It's advice I will take to heart. Silvia has 150 points to spend on her magical arts. Of course, it's not a 1 for 1 transfer, instead costing a certain number of points. For example, to get a rating of 10 costs 55 of these points.

I go ahead and put 10 in both Intellego (Perception Technique) and 10 in Mentem (Mental Form). I also put 8 in Imagenom (Illusions Form). With my remaining points, I put 2 into Creo (Creation Technique) and 1 into Muto (Transform Technique).
Next, I need to pick my spells. I have 150 levels of spells I can pick. With my high Intellgeo and Mentem, I want to grab most of my high level spells from there.  Intellego + Mentem is 20, and I can take spells that cost up to 10 higher than that total, or 30. The level 30 spell for that group is Peering into the Mortal Mind which allows long term reading of a mind. I grab that, and have 120 levels left to buy. I grab a few more Intellego and Mentem spells, but hop over to Imagenom to get a few illusion spells (which allow me to see distant places and see what happened in the past), before rounding up with a few minor spells to cause fear in a foe and the like. Here's the spell book: 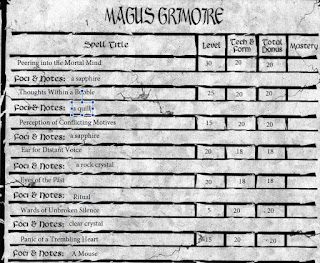 Silvia is mainly done at this point, there's just a few things left to complete her. She gains 3 Confidence Points, which are similar to "hero" or "willpower" points in other games.  If she had gained a Reputation from her virtues and flaws, she would note that now. But, she didn't, so we move on to Personality Traits. I can have three, with values up to +/- 3. Unlike other stats, these don't need to "balance" at the end.  I give her a Kind of -2 (she is NOT Kind, and no one should mistake her for that), but she is Respectful (at +2) and Sly at +3.
I next need to pick Equipment. Silvia is pretty slight, and not much in the way of a combatant. I assume she just has a set of court dress and the like, but no armor or weapons or anything "practical."

Below is the full character sheet: 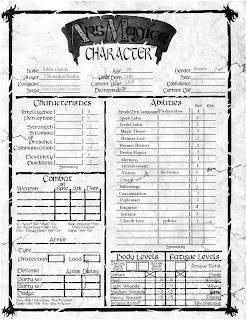 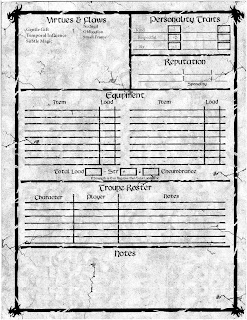 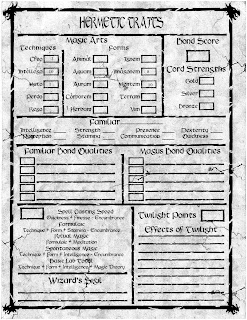 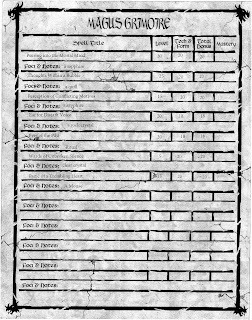