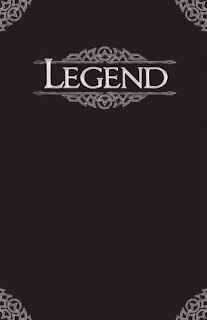 Legend is a semi-generic fantasy RPG from Mongoose, based on the classic game Runequest II. Now, I've never played Runequest II. Heck, I haven't played Runequest I, or III or...you know, I know nothing about Runequest, except that it had some really awesome looking books back in the day. But it was never a game that had a presence in my gaming circles, so it just sort of lurked at the edge of my awareness.

I didn't buy Legend due to its legacy, but rather what it promised. About a decade ago, I was getting rather burned out by Dungeons & Dragons. 3rd Ed, Pathfinder, 4th Ed--none of them were all that much fun anymore. Still enjoying the tropes of fantasy gaming, I sought out something else. Of the games I checked out around that time, Legend stood out the most.

I'm not sure I "get" Legend, as to this day I haven't had a chance to run or even play it. It seems mainly driven by percentile skills, and has more than a passing resemblance to Call of Cthulhu. It's generic, but seems pretty focused on a more brutal and grounded approach to gaming. From what I've read of it, I think it could be a game that I could love. I just don't know much about it. Like others in this series, this will be my first attempt to even make a character using the system. So, while I expect misunderstandings and mistakes, I'm also really excited about this chance.

Legend has a pretty strong random character creation, with some decisions/point spending. It has seven Attributes rated on the 3-18 scale. Skills are percentile based. A player makes some decisions--for example having a pool of points to increase their skills--but many things are still random. As such, I will let the dice determine what sort of character I'm going to make. The only decision I make at this point is a coin flip to determine gender, and this character will be a male.

The primary way to generate Attributes is to roll them in order, though there is a "roll and assign" option, as well as a point buy one. For this, I will be doing the "roll in order."  For Strength,  Constitution, Power, Dexterity, and Charisma, I need to roll 3d6. I do, and get 12, 11, 10, 17, and 15. So, he is good looking and very agile, but otherwise pretty average. For Intelligence and Size, I need to roll 2d6+6. Doing so gives me 12 and 14.

The character also has a variety of other stats that are derived from his Attributes. The first is Combat Actions, or how many actions he can take in a fight. I add his DEX and INT for a total of 29, then divide that by 2 and get 14 (rounding down). With a 14, he gets 3 Combat Actions. Next is the Damage Modifier, a boost added to his melee attacks. I add his STR and SIZ together for a 26, and compare that value to a chart. The 26 gives him a +1d2 to all damage rolls. It's something, I suppose.

Next up is Hit Points. Unlike most other games, Legend characters don't have one pool of health that they are worried about. Instead, each part of the body has its own Hit Points--so, it is possible to lose a limb while remaining untouched on ones torso. I add his SIZ and CON together and compare the total to a chart in order to get the values for these locations.

Next, I worry about his Improvement Roll Modifier, which apparently comes up when "leveling up." With a CHA of 15, he gets a +1 modifier to this roll.  After that, I need to worry about Magic Points. There are generally equal to the characters POW score, but apparently later you can dedicate some of these to a deity of some sort. I'm not sure how that works, but for now we just go with his POW score of 10. Also, as a Human, he starts with a movement of 8 meters, with no modification due to Attributes.

Finally, I need to calculate his Strike Rank. While Combat Actions determines how often he can attack, Strike Rank determines how quickly he can. I average his INT and DEX for 15 (I made a mistake earlier and you're supposed to round up, not down).  His Strike Rank will be modified by his armor, but he doesn't have any yet. I do want to note that the Armor will give him a penalty equal to its Armor Points divided by 5. 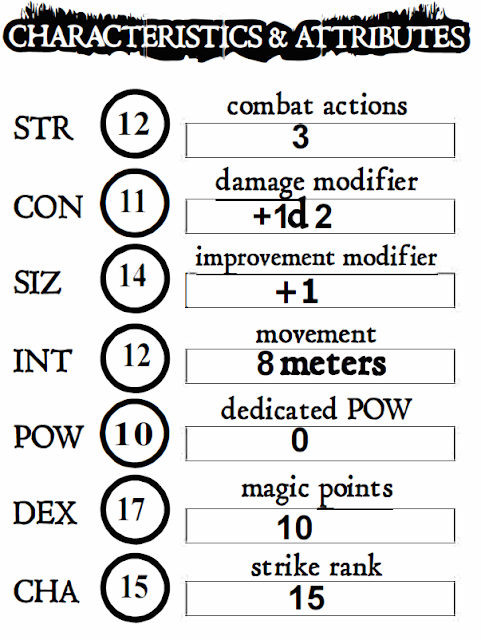 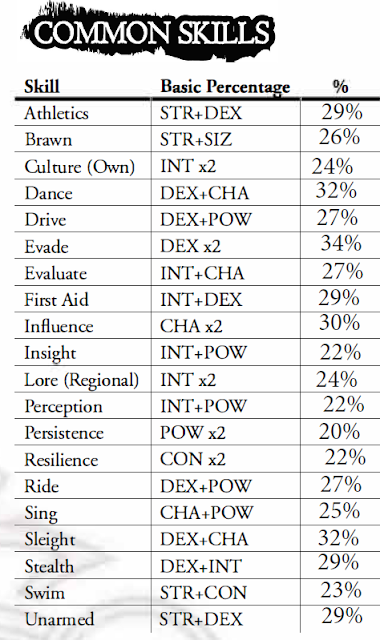 A character also starts with a base value in Combat and Magic skills--these are the basic value only. Later, they might learn Sword and Shield Combat Style, or Two Swords Style. Both would have a base  value equal to the character's Close Combat Skill.
Magic is a bit more complicated. Some games will have magic as a very common element, while others will restrict it to dedicated practitioners.  I'm not sure how magical the world for this character will be, but I'm leaning towards "rare." Regardless, I make a note of his starting Magic value as well.

Step 4--Previous Experience
There are three subsections for this--Cultural Background, Profession, and Free Skill Points. Cultural Background is the first choice I need to make, but I'm not going to. There are four options to choose from--Barbarian, Civilized, Nomad, and Primitive. Rather than choosing, I'm going to roll a d4. I do, and get a 4, so this character is from a Primitive Culture.  It's not exactly the most accurate reading of history, but I decide that his culture is something like "Pictish" and I now name the character--Drust.
As a Primitive character, he gains the following bonuses--+15% to Athletics, Perception, Resilience and Stealth, and +30% to Culture (Own) and Lore (Regional). Drust also starts with one combat style. I could pick Bow for this, particularly since his Ranged Combat skill is higher, but I like the idea of "Spear and Shield," so I pick that instead. He also gets Advanced Skills in Language (Native), Survival, and Track.
I then look at Drust's possible Profession, which will give him additional Skills. There's a large list of options, each tied to a Cultural Background, so I can only pick those for Primitive or All. Despite his middling Strength, I do want him to be a warrior of sorts, so I decide to go with Hunter. This gives him bonuses to Lore, Resilience, Stealth, and Track. Plus, he gets one Ranged Combat Skill for his culture, which I choose as Bow.
Finally, I have 250 points to spend wherever I want, with only a few stipulations. No skill can have more than 30 points added to it, and only 20 for Advanced Skills. I can buy a new Advanced Skill for 10 of these points. I could also, at this point, by Magic Skills, but I don't see Drust as a magic user right now. I spend the max on his Combat Skills, and the scatter the rest around as seems appropriate. At the end, here are his Skills. 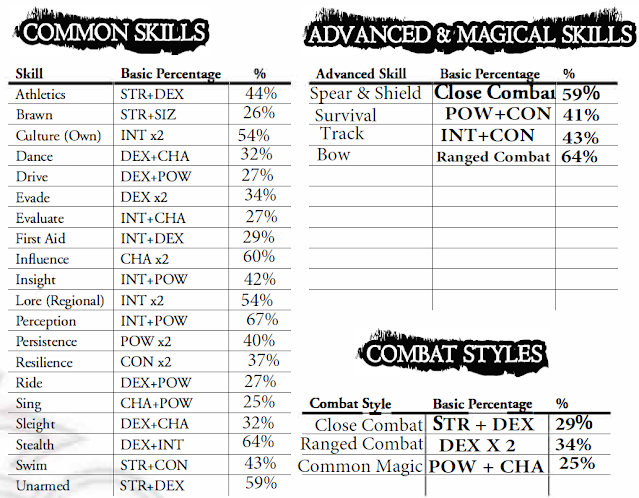 Step 5--Other Characteristics
There's a number of charts to figure out other elements of the character, and I decide to roll on them to see what Drust's family and personal history and the like. Each is a percentile roll compared to a chart. Here's what I get.
So, Drust is married, but has no children yet. He comes from a large immediate family, but his broader family is small, and they have no particular standing in the community. His "visions of the future" gives me a solid hook for why he's adventuring. I figure he saw some sort of doom or calamity affect his people. Naturally, few locally take him seriously, so he is forced to set off to try and avert this doom. Though as a player, I fully expect the classic "attempting to change the future inadvertently causes that future."
Step 6--Final Touches
This is when you're supposed to pick a Name (done), assign Hero Points (2), and starting Equipment. He begins with a set of clothes and spares, personal mementos, a weeks worth of food, and one weapon for each of his combat skills.  I update his sheet accordingly. And with that, Drust is ready to make his legend!
Final Thoughts
This is probably the "coldest" game I've come to so far this challenge, as I last read Legend about a decade ago. And I see why I was first attracted to the game. Character creation was fast and fun, and I really enjoyed some of the random charts to help define Drust and the world around him.
Here's his final sheet. There's a few things odd about it, as my Adobe was giving me odd results when trying to manually edit it for his weapons--like, I was trying to type in "Bow" and it would only show "Boug." So, I skilled that part. 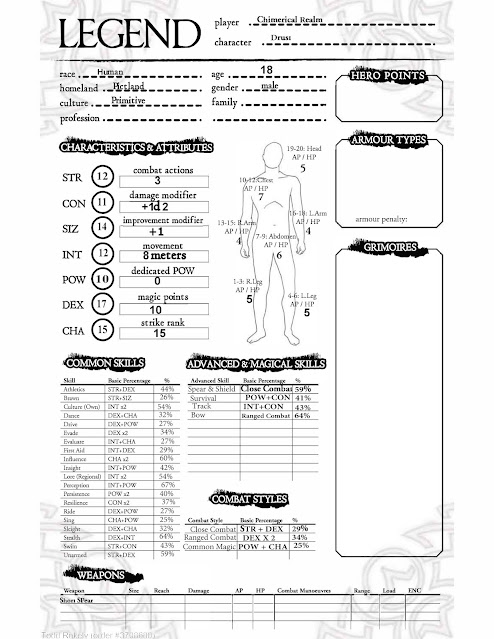 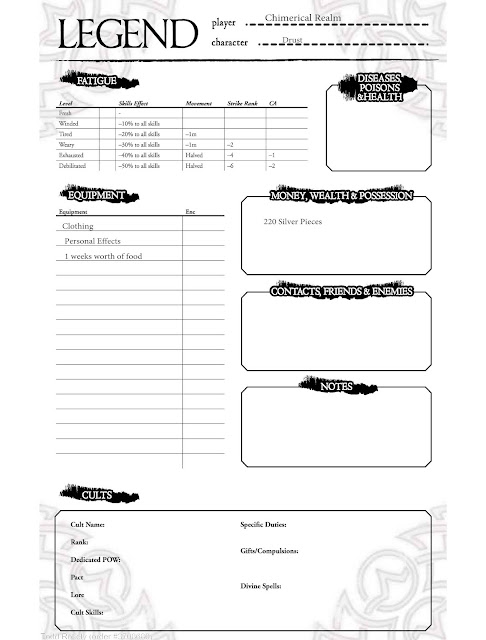