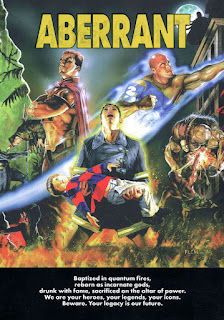 Aberrant was White Wolf's take on the comic book/super-hero genre. It was the 2nd game in their "Aeonverse" trilogy, which reimaged a new "pulp" history for our world. In this world, a disaster on a research space station led to a dousing of the world with radiation, and the people began to change, and to exhibit strange, superhuman powers. While still relatively rare, the presence of these "Novas" fundamentally altered the world.

Unlike traditional comic books, or those games that seek to emulate the like Mutants & Masterminds or Heroes Unlimited,  Aberrant is an attempt to explore "what would really happen." There are few, to almost no, "supervillains." Sure, there are super criminals, but they don't dress up in gaudy outfits and rob banks--they control or are top-enforcers for crime syndicates and cartels. Those that do dress up in gaudy outfits are more likely to be hired mercenaries--dubbed "Elites"--as interested in their Q-Rating as anything else. There is a few "superheroes" but these are more likely to be employees of a given city or nation or, among the best of the best--members of the official UN super team "Team Tomorrow." But there is darkness in the world, as well. There are "Teragens"--radical Nova supremacist's who believe that they are destined to inherit the earth, and willing to use terrorism and violence to bring that inheritance about. And Team Tomorrow is far from perfect, something that rebellious "Aberrants" have only recently come to understand. Most aren't really part of any of these factions, instead using their powers for profit. Why rob a bank, when you can be hired by the bank and make seven figures starting, complete with benefits?

There was a Kickstarter for a new edition back in 2019, but I haven't received my copy yet. So, I'll be using the first edition of the rules for this.

At its core, Aberrant is based on the typical "White Wolf" system. Character have Attributes and Abilities (what other games call Skills), rated on a scale of 1-5. Each "dot" is these translates to a die that the player rolls to accomplish something. So, if attempting to climb a ladder, one might roll Strength and Athletics. If both of these were rated at 2, then the players would roll 8 die.

Character creation is point based. Though, rather than a large pool of points, each step of character creation gives a number to be spent to buy various levels/dots in the appropriate area. The process is divided into two Phases, each with various Steps. Phase 1 is creating the person as they were prior to "erupting" into a Nova. Phase 2 is the "super" phase of creation. As with all point based character creation methods, the Concept is the major decision a player needs to make.

At this step, I need to figure out the characters Concept (the rough description of who the character is), their Nature (who they are at their core), and their Allegiance (which of the various factions in the world they belong to). I'm going to use the Universal NPC Emulator to come up with a random Concept, but two things I want to note first. Based on a coin flip, this character will be a woman. Secondly, I want to have a solid contrast between her Human and Nova nature--her powers won't exactly "fit" the character. If she's very physically focused, maybe I'll go with odd nature or energy powers. Whereas a more scholarly type might end up with super-strength.

With that out of the way, I roll on the UNE and get:

Sensible Mercenary who wants to Establish the Government

That's a...pretty solid character for Aberrant. I decide to split this up in two ways. As a human, she was a "nation builder"--a consultant hired by various corporations to advise various nations in the best way to keep their nation stable enough for the companies profit. As a Nova, this has become a more active and, well, violent focus. For her Nature, I pick Bravo--there are winners, and losers, and she is a winner. For her Allegiance, I choose Corporate, making a note of the "suggested backgrounds" of Allies, Backing, Influence, and Resources.

Needing a name, I flip to the Everyone, Everywhere List. Based on the concept, I want her to be a westerner, but in the global and diverse world of Aberrant, playing another American just feels wrong. I decide to go with a French character, as I don't think I've made one yet. Simone Bremond is her name.

Step 2--Attributes
There are nine attributes in Aberrant, divided into the categories of Physical, Social, and Mental. I need to pick one to be Simone's Primary (and have 7 points to assign those), Secondary (5 points), and Tertiary (3 points). Each Attribute begins at a value of 1, with 2 being average. I decide to make her Social primary. I assign 2 to Charisma (she is quite likeable and charming), 2 to Appearance (she is quite attractive), and 3 to Manipulation (she is very good at convincing people to do things that aren't in their interest). I choose Mental as her Secondary, and assign 2 each to Intelligence and Wits, as she is quite smart and clever, leaving just 1 for her Perception, where she is merely average. This leaves Physical to be Tertiary. I don't see her as having any particular weaknesses, so I spend 1 point on each, leaving her average in Strength, Dexterity, and Stamina.
Step 3--Abilities
I have 23 points to spend on Simone's Abilities (i.e. Skills). I can assign them as I wish, though none can be rated higher than 3 at this stage. While not a Nova yet, she will be one, and so already have a 3 in both Endurance and Resistance. While I know I want her to be quite skilled in certain areas, I start by putting one dot in all the Abilities I think will be of interest to her.  I end up picking 12 Abilities of interest--Drive, Investigation, Academics, Bureaucracy, Computer, Linguistics, Business, Rapport, Intimidate, Subterfuge, Etiquette, and Subterfuge. Some I'm fine keeping with a value of 1 (such as Drive and Computer), while others need to be much higher (such as Subterfuge). I'm not 100% satisfied with where she ends up. I had to keep her Intimidate at 1 to get her Linguistics to 3. 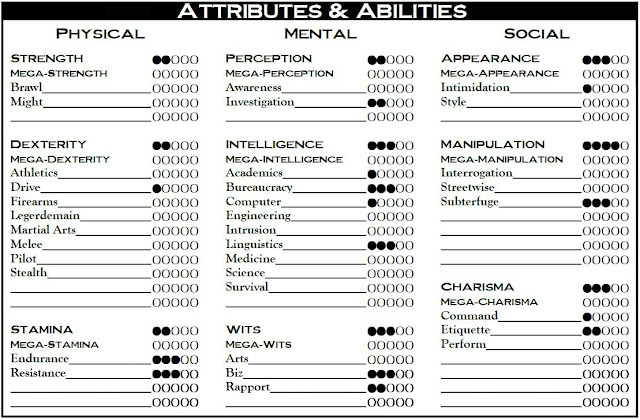 Step 4--Backgrounds
Now I have 7 points to pick Simone's Backgrounds. Even as a human, she was an "international mercenary," so I try to stick with those.  She has a couple of well-connected and close friends, has attained a fairly comfortable rank in the corporate world, and is decently well-paid.

Step 5--Finishing Touches
Now I figure out some of the other stuff for Simone. She begins with a Willpower of 3 and a Quantum of 1 (roughly the measure of potential superpower). She also has a Quantum Pool, which she will spend to "activate" her superpowers. This begins at 20+(Quantum x 2), or 22.
Finally, I have 15 Freebie Points to round her out. I can spend these anywhere, but different aspects cost different amounts. For example, increasing a Background only costs 1 point, while increasing an Attribute would cost 5.  I go ahead and spend 7 Freebies to increase her Quantum to 2 (which also increases her Pool to 24). I have 8 points left, and decide to focus on Abilities (she should be quite skilled) and Willpower--each of these costs two points each. I spend 4 to giver a Willpower of 5, and I increase both her Subterfuge and Bureaucracy to 4. She know how to lie to get her way, but more importantly she understands how things truly get done.
At this stage, Simone's life as a normal human is complete.
Phase 2: Nova
Step 1--Eruption
I need to figure what even triggered her latent abilities and turned her into a Nova. Given her background and concept, the obvious choice is to have a group of terrorists/freedom fighters detonate a bomb in the "International Development" Building she was working out of. Something about not wanting their land "pillaged" for the "profit of a multinational corporation." Which, to be fair, was what she was doing. She wasn't directly harmed by the blast, but was trapped by the buildings collapse, and her Eruption is what saved her.
Step 2--Nova Points
I have 30 points to spend on Simone's "Noveness"--these can be spent in a variety of ways, similar to Freebie Points, but each has its own cost. For example, a Level 1 power costs only 1 point, while a Level 3 one would cost 5 points. I can also spend these on "normal" things, like increasing her Abilities. Each Nova point so spent would get me 6 dots to spread around.
First, I want to pick her super powers. There are quite a bit to choose from, and a number would greatly enhance her already existing Skills. But, I want her Eruption to have taken her in a different direction. I decide to go with Density Control, which is a level 2 power. With this ability, she can either increase her Density (making her heavier, tougher, and stronger) or reduce it, allowing her to slip through cracks. At level 3, she can walk through walls. I like this ability, particularly with the Extra of Full Control, allowing her to have the option of Increasing or Decreasing her Density, rather than be stuck with just one. So, she can walk through the walls and then turn solid as a rock.
Let's do some math. Density Control has a Quantum Minimum of 3. Simone's Quantum is currently a 2, so I spend 5 Nova Points to increase that to the minimum. This also increases her Quantum Pool to 26. Density Control is a level 2 power, but the Extra I want increases it to level 3, and I want her to have it at least at a 3. This costs me 5 points per level, or 15 total. I've spent 20 out of her available 30.
I like the idea of her being "ghostly" when she Reduces her Density, and there's always the issue of "why don't intangible characters fall through the floor?" so I buy her Flight at 1. She's not fast, but can still move in three dimensions. I also pick up Invisibility of 1 for her. I'd love to limit both of these to "only when Density is Reduced," but Aberrant doesn't give the option for "limitations." So, I need to pay full price. Both of these are Level 2 powers, and cost 3 points each.
I have four points left, and decide to spend them on boosting her natural abilities. I spend 1 point to get 3 Attributes points, which I put into her Physical Attributes. One more gets me 6 Abilities points, which I put into combat and stealth skills. I spend 1 on Backgrounds, for 5 points.  I boost her Resources and Backing (becoming a Nova has been good for her career), and get her a point in EU Fiber, the odd material that allows a Nova's clothing to attune to them--so she can turn invisible and still be clothed. The remainder goes to her Willpower, increasing it to 6.
Final Thoughts
Like most White Wolf games, Aberrant has a very simple and quick Character Generation system. The addition of super powers, and the need to weigh the various pros and cons does add quite a bit of time, though, compared to Werewolf or Mage. But, compared to systems like Mutants & Masterminds, its a breeze. In particular, the division between the Human and Nova phases not only simplifies the process, but also allows a player to focus on different aspects of the character, rather than putting the sole priority on what makes them "super."
Here's Simone's final sheet: 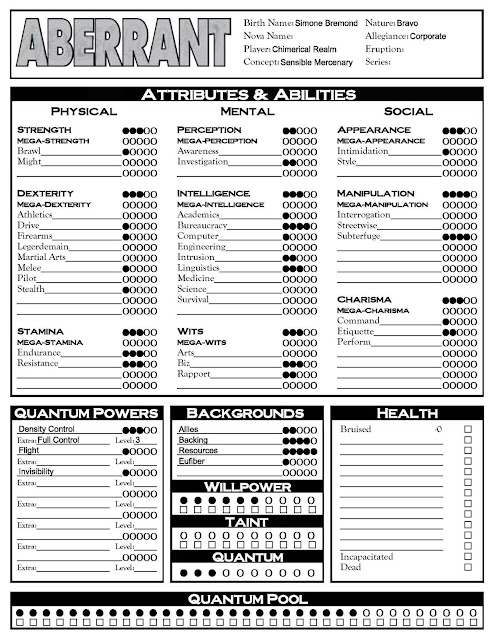