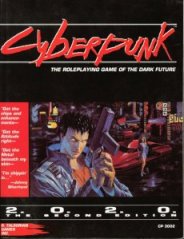 Cyberpunk 2020 (CP2020) is the "roleplaying game of the grim future." It paints a bleak vision of the far off year of 2020. A future filled with ecological collapse, near constant wars, overwhelming corporate power, and a divide between the small number of elites who control the wealth of the world, and the vast majority of humanity ground beneath their greed. As the masses are fed a constant diet of fake food and faker entertainment, the true power and decisions are happening in corporate towers and backroom alleys. An incredible imaginary world, indeed.

Ok, so, they got some things right. Others they got wrong--did anyone besides hipsters still listen to tapes in 2020? Is "protest rock" even remotely a "thing," let alone the voice of mass movements? Any "near future" work is going to be eclipsed sooner rather than later, and CP2020 was always on the tail end of the literary movement anyway. It's not about what the world is like now, or even really what people thought our world would be like back in 1990. It's a game, and that's how it should be judged.

And it's a high energy, hopefully nihilistic rampage of a game, driven high on emotions, passions, and fading glimpses of a dream you dare not let yourself belief. It's dark, and sexy, and violent, and goofy. Nowadays, it's probably best know for the video game based on it which had a...controversial rollout. But this book was the one that I was always fascinated by. It's also a game I've never been able to play.

Which I'm starting to realize is a recurring theme in this series.

For the life of me, I have no idea why. I loved it. At least some of my friends loved it. At least, they wouldn't shut up about how amazing its combat system was. And most of them, as nerdy teenagers in the early 90's, hoped to grow up "cyberpunk." But we never got around to actually playing a damn game of it.

CP2020 has 9 stats, and a whole lot of skills. In game, you roll a 1d10 and add its result to a relevant Skill and Attribute. The GM Sets the difficulty--10 is Easy, 20 is Difficult, 30 in Nearly Impossible. Attributes are determined by assigning points to them, as are Skills. Characters are one of 10 Roles. While roughly analogous to "classes," they're more a thematic groupings of skills. Unlike, say, Call of Cthulhu's "Professions," though, roles are distinct. Each has a Special Ability that sets them apart. Solos (the mercenaries and hired guns) have Combat Sense, which boost their initiative, while Corporates can call upon the resources of their organization.  Given how important they are, we'll start with deciding on a role.

Normally when faced with an open ended decision, I use the Universal NPC Emulator to give me a concept and work from there. Not this time, though. Instead I want to figure out what Role my character will be and use that as my basis. There are 10 possible options:

So, I roll a d10 and get a 6 for Fixer. So, this character is going to be a deal maker, a criminal who gets things done. The friend who has friends that would love to help you, but there's just one thing...
Step 2--Stats
There a number of ways to determine my Fixer's attributes, but I decide to use the "Fast" method--I roll 1d10 nine times, and assign them to each of their attributes As a Fixer, Cool is key, so I will plan on placing my highest in that. Anything of 2 or less is rerolled.
Here are my rolls: 10, 8, 5, 5, 2 (reroll for 9), 8, 7, 6, 2 (reroll for 9). Seems like decent stats, but when I compare the total (67), they're still below the "Minor Hero" amount of 75. Ah well, that's what I get for going random. I put the two 5's into Movement and Body, figuring the character is roughly average there. The 10 goes into Cool, naturally. The rest get mixed around as seems appropriate.

Step 3--Life Path
Easily the section I've been most excited about, CP2020 has a really cool Life Path system as part of character creation. It is similar to but different from the systems used in Mechwarrior and Traveler. The purpose of the Life Path isn't to gain more skills or shares of a ship, but instead to provide attitude, personality, and soap opera like drama for the character.
First, I roll to determine the characters personal style. Actually, scratch that. First I'm going to do a coin flip and determine this characters gender, and decide that she will be female. Now I move onto her style--Clothes, Hairstyle, and Affections. Each has a separate table to roll a d10 against.
I also roll to get her ethnicity, and end up Croatian with a name of Katarina Vergerije. I also decide her Handle (streetname) is Verge. 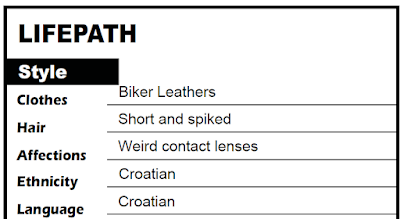 Next I determine Verge's family, and what happened to her growing up. Using the tables, I determine that her father was a high ranking corporate executive, but that the family lost their position and wealth due to betrayal. Her early years were spent in a clean and safe Corporate Zone, but her teen years were spent in a decaying neighborhood. She also has six siblings, three brothers and three sisters. At their peak, the family had more than enough money to support each one. But now each child is forced to fend for themselves.
I knock out some other personality elements, and then I move onto the meat of the section--the dramatic events of Verge's life. I start by figuring out her age by rolling 2d6+16, for a total of 24. Then, for each year after her 16th I need to roll for a Life Event.
For her 17th year, I roll a 3, for Big Problems, Big Wins. I then roll a d10 and get another 3, and an odd result give me Disaster Strikes. I then roll a 9 and get Hunted by Corporation--some corporate honcho is gunning for her. This could be the same evenr as her families disaster, but I decide she tried to get some payback and it blew up in her face. They're after her in particular. She is equally committed to the struggle.
I continue in this manner for the next 6 years of her life. 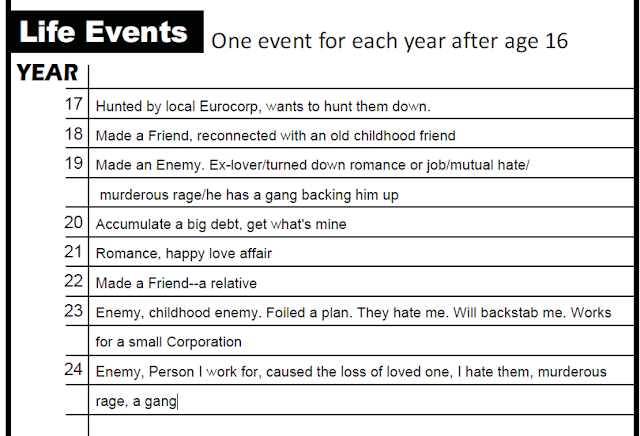 A few close friends, a few bitter enemies, some happy romances, some tragic ones. All in all, a ripe history full of possibilities for future stories.
Step 4--Skills
As a Fixer, Verge has 40 points to spend among 10 Career Skills: Streetdeal, Awareness, Forgery, Handgun, Brawling, Melee, Picklock, Pickpocket, Intimidate, and Persuasion. Streetdeal is the Fixer's core skill and allows her to find contacts and jobs and uncover all kinds of street secrets. I want Verge to be solid in it, but not overwhelming--9 or so is the equivalent of a Mafia Don, and she's not that wired in. At least, not yet.
She also get a number of Pickup Skills equal to her REF and INT, for 17. These can't be spent on her Career Skills, but need to be spent elsewhere.  I pick up English as a language and a few other skills to try and round out Verge
Step 5--Gear
With a 6 in Streetdeal, Verge has a base of $3,000 dollars a month. To figure out her cash on hand, I need to determine how many months she's "saved" by rolling 1d6/3. I roll a 2, for 0.666, leaving me with $2,000 to spend.  It's less than I had hoped, so I just get her the minimal--a solid handgun and a backup piece, some extra ammo, her clothing, a cell phone (and service plan), hard leather armor, and some basic cyberwear--Shift-Tacs (contacts that allow her to change the color of her eyes), Skinwatch, and a Contraceptive Implant.  All that leaves her with about $660.00 left, which I save. I rolled high on a d10, meaning that Verge is currently unemployed. That  $600 is all she has to get back on her feet.
Overview
Given that most of my limited experience with playing cyberpunk RPGs is with Shadowrun, I was amazed at how quick and easy Cyberpunk's Character Creation was. There's a ton of skills, so I'm still left with the feeling that Verge isn't as competent as I would like, but honestly with only 17 free points there wasn't much more I could do. And the fact there Char Gen is broken up into phases means I never had to worry about "did I spend too many points on X instead of Y?"
That, and I really love the Life Events rules. It's a small system, but it provides a wonderful and dramatic background for any character, full of story potential.
The hardest part was probably gearing up Verge, but that's to be expected by the genre. Having only 2k limited what I could buy, and so I didn't get to go crazy with cyberwear or the like.  If I had had a few thousand more, I could have easily spend a huge amount of time configuring her equipment. But as it is, I like how desperate Verge is for the beginning of the game.
Here's Verge's sheet: 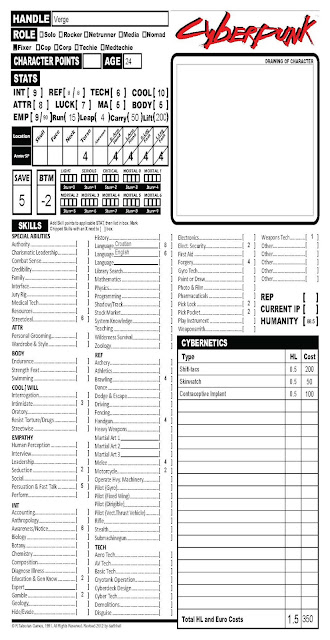 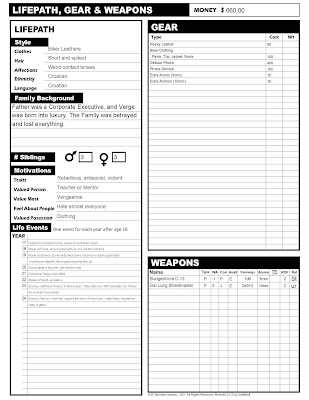