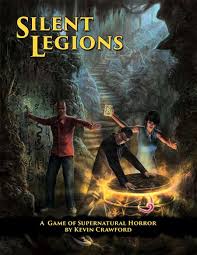 Silent Legions is an "OSR" style Lovecraftian horror game, where valiant investigators plumb the mysteries of strange and inhuman monstrosities and cults. It's a fairly "light" system from the point of view of the players, with the unique hook of it being a "sandbox" style game. Most of the core book is a series of charts and other tools to help the GM come up with their own horror setting, with multiple vile groups working their schemes, and the players interacting with them based on their own motivation, rather than the conventional "mysteries" in other, more famous takes, on this genre. I have a lot of love for the Sine Nomine games, but other than Scarlet Heroes, I haven't yet had a chance to actual play any of them. So, this will be another "first character" for this Challenge.

Silent Legions system is based off of Labyrinth Lord / BX D&D. It has the classic six attributes (Strength, Dexterity, Stamina, Intelligence, Wisdom, and Charisma), though the values for these are less than later games. For example, an 18 only gives you a +2 modifier, with 14-17 giving you a +1. It does has a simple skills system, though, with values ranging from -1 (untrained) to +4 (mastery). Skills are rolled with a 2d6 plus the skill and attribute against various difficulties.

While players can pick a number of number of options for their character, you can also roll for most of theses. As per the "rules" for this series, I will be using the random options. I decide that this character will be a woman, and will be set in the modern US. I roll on the "Modern Youth" tables for Everyone, Everywhere and get an 88 and a 9 for a name of Sydney Atkinson.

First, I need to determine Sydney's attributes. Later on, when I pick her Class, I can increase one of her attributes to 14, guaranteeing she will be pretty competent in her chosen profession. Otherwise, I roll 3d6 for each. Here's what I get:

That's actually a pretty strong set. I have two stats that gives me a +1, and nothing that gives me a negative. I go and put these on the sheet, knowing that I will probably change one later.
Step 2: Background and Connection
Next up, we find out where Sydney comes from as well as her ties to the other PC's. In theory, you would work with the other players to develop these, but for now I'll just roll on the chart. I roll a d12 and get a 5. The other PC is Sydney's former lover or spouse. That's great, I'm sure we all look forward to confronting cosmic horror with our ex, rather than confronting cosmic horror to avoid our ex.

For her background, I roll a d8 and a d10. I roll an 8 and 5 for "Soldier" which gives me the following skills at "0"--Athletics, Combat/Any, Leadership, and Tactics. For the Combat skill, I can pick which specialty, and I decide on Projectile which covers everything from pistols to shotguns and rifles. 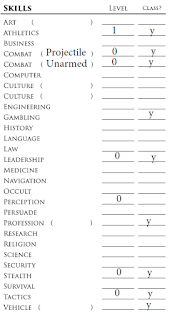 There are four classes in Silent Legions--Investigators, Scholars, Socialites, and Tough. There are no prerequisites for the classes. Sydney could be any of the above--maybe she was a military investigator, or gained a PhD in Occult Lore through the GI Bill, or became a Spy and relied more on her words than her skills with a gun. But, honestly, I've made a lot of talky characters with this challenge, and I so I choose Tough for Sydney, just because I want to make an ass-kicker.

A Tough has two "Prime Attributes," Strength and Dexterity. I can set either of these to 14, giving Sydney a +1. I decide to with Dexterity, to make her a killer shot. She also gets 4 skills from her Class--Athletics, Combat/Any, Any Class Skill, and Any One Skill. The "Class Skills" for a Tough are: Athletics, Combat, Gambling, Leadership, Profession, Stealth, Survival, Tactics, and Vehicles. When she levels up, these will be at a reduced cost. Since Sydney already has Athletics, her skill in this increases from "0" to "1." In theory, I could pick Athletics as one of her other skills, but I can't have a skill of higher than "1" at creation. She'll need to wait till she levels up to improve that skill. Rather than increasing her Projectile Combat skill, I decide to give her Unarmed--sometimes gun play isn't the best solution to a problem. For her class skill, I grab Stealth, and I can pick anything for her last one. I decide that Perception would be useful for her.

As a first level character, she starts with 2 points of Expertise. She uses this to activate her special ability. As a Tough this is "Ravenous for Life"--she can automatically stabilize if reduced to 0 points. I also note her saving throws and hit points. As a Tough, she starts with 1d8 (she'd get a bonus if here Stamina was higher). I roll a 4 and note this on her sheet.

Wealth and money is a bit abstracted in Silent Legions, and by default characters are assumed to be Average. You can choose to be Struggling for a bonus, or Affluent for a cost. I decide to stick with Average. The game assumes you have various clothes, a small home or apartment, and the basic equipment that a typical person would have. She can buy common goods and services costing less than $600 without an issue. Given that, I really only need to worry about the stuff she'd likely be brining with her initially. I grab a Semi-Auto Pistol and a Pump Shotgun for her weapons, Armor, unfortunately, is a bit outside her budget currently. There's some other gear I could buy, but I go with the assumption "of course she has a cheap smart phone, a basic tablet or laptop, and a pair of sunglasses" approach.

Both of her weapons are tied to Dexterity, which is a +1. Her skill is a 0, but she gets an additional +1 to attacks due to her class, giving her a +2. I note all this on her sheet. And with that, Sydney is ready to fight some monstrosities!
Final Thoughts
I really enjoy the mixture of dice rolling and decision making in Silent Legions. Character creation is pretty darn fast and "light," and yet at the end I have a character I think would not only be fun to play, but will actually be pretty competent in her niche. She might not be the best designed character, but I never ran into the choice paralysis I felt with some of the other games in this series. Plus, the speed of generation means that, if something should happen to her, bringing in her sister to avenge Sydney would only take a few minutes.
Here's the completed sheet: 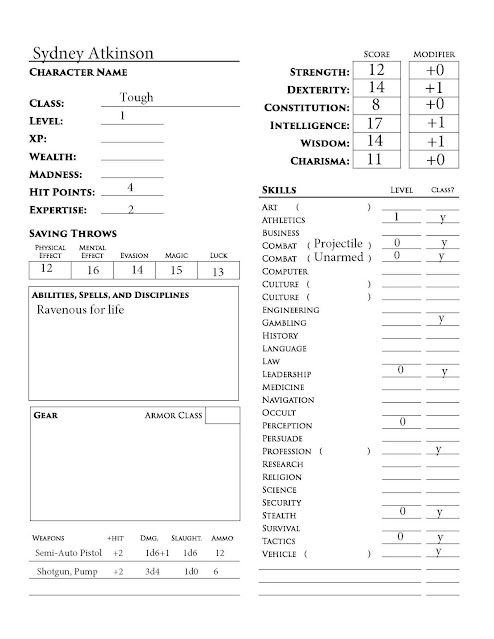