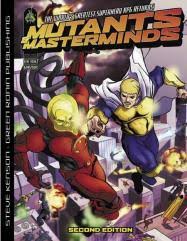 Mutants & Masterminds (M&M) is a superhero RPG, based on the then dominate "D20" system, though with a number of unique features and systems. Unlike other systems, it truly is a "D20" game, with every roll being based on a roll of a d20, creating a fairly streamlined system. It does away with such legacy systems as "hit points," instead using things like "toughness saves" to show how unstoppable and untouchable certain comic book characters are.

It's also probably the superhero game I've played the most. It's first edition came out when everyone was still incredibly excited with the D20 system, and it was easy to get my friends and other nearby gamers interested in trying out the game. The fact that it was a point based system and allowed for a wide variety of types while still keeping everyone more or less "balanced" also factored heavily in its popularity. I was never able to get an ongoing campaign going, unfortunately, and so my gameplay was limited to occasional one-shots over the years. It's currently up to the third edition, but unfortunately I don't own that particular version, not even as in PDF. So, I'll be creating this character with the now-dated 2nd Edition rules set.

The GM first determines the campaign's Power Level, which determines both how many points a given player has to create their character, as well as a hard limit on how high that characters various traits can be. For example, if the campaign has a Power Level of 10, the character would not be able to have any saving throw higher than 10, their Attack Bonus is limited to 10, and no Super Power can be higher than 10. There are some rules that allow you to trade one for another with you're GM's permission (for example, take a lower Defense and offset it with a Higher Toughness), but for this example I'll try and keep everything at base value.

Character creation is handled with a pool of points, determined by the Power Level. Much like GURPS, there is one large pool and these are used to purchase everything possible for a character. As such, I will naturally be "flipping" through the book quite a bit, and there will be some adjustments here and there to totals. Hopefully, it won't be too crazy.

Like with other point base games, the concept takes on a significant, if not dominant role in creating a character in M&M. And, I'll be honest, I'm at a bit of a loss on how to proceed. I had been using The Universal NPC Emulator, but I'm not sure it will give me the kind of results I was looking for. I spent some time online looking up various websites with "Random Super Hero", but most of these just gave me a list of random Marvel or DC characters, or aggressively goofy and wacky character names.

So, let's give the UNE an option. First, I need to pick a gender from my hero. I don't have a particular one in mind, so I decide to roll a d10--1-4 male, 5-8 female, 9-10 transgendered. I get a 4, so he'll be male.  Due to my hesitation with the UNE for this day's challenge, I decide to roll it three times and then pick the one that is most inspiring. Each character is defined be a Modifier and a Noun and have a Motivation with a Verb and a Noun. Each is determined by rolling a percentile. Rolling 3 sets, I get:

Now that I've rolled it, though, all three actually give me some ideas. The "Dignified Soldier" could be a Captain America-type fighting against corruption. The Cunning Steward might be some sort of "super-cop," potentially one with mental powers. And the "Plebian Scrapper" could be a two-fisted brawler fighting for justice of all type. Of these, I lean towards the Plebian Scrapper, and decide to go with that.  He needs a name, so I roll on the Everyone, Everywhere List for "Modern Youth" and get 74 and 62 for Diego De Angelo.  I decide on a whim that his superhero name will be Gracchi after the revolutionary Roman tribunes.
Step 2: Power Level & Basic Abilities
I decide to go with the default Power Level of 10, and thus have 150 Power Points to create my character.  Each Ability starts with a value of 10 and costs 1 Power Point for each point over 10. I could go lower, but I want him to be pretty impressive across the board.  I decide to go with a 14 (for a +2 modifier) in Intelligence, Wisdom, and Charisma, with a 16 in Strength, Dexterity, and Stamina (for a +3 in those). This costs 30 points. At this point, I should also pick my Attack or Defense Bonus, but I'm going to hold off on that for now.
Step 3: Powers 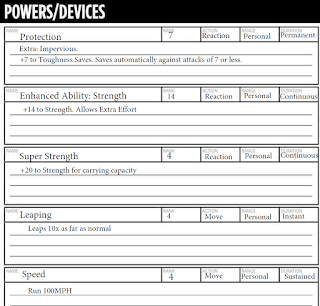 Technically, I should now move on to Skills, and then Feats. But instead I'm skipping ahead to superpowers. I want Gracchi to be fast, tough, and strong. And with only 120 points to play around with, I want to make sure I have enough to get the abilities I really want for him.  The first power that speaks to me is Protection. This will give me bonus to Gracchi's Toughness Saving Throw (what I roll to resist damage), and decide for the add-on Impervious which allows him to ignore damage less than his ranks. He already has a +3 bonus to his Toughness from his Stamina, which limits him to a 7 in this. It also means that only has 7 levels of Impervious--attacks that have an 8 damage or higher can affect him normally. Now, normally, I would do the "have a higher Toughness for a lower Defense," but for this experiment I'm going to keep things at 10. Protection costs 1 point per rank, and Imperious adds an additional cost of +1 per rank, for a total of 14.

Next, I want to boost my damage. I decide to do this by increasing my Strength via Enhanced Ability which will let me use Extra Effort and the like. This costs 1 point per level. With a base of 16, my Damage is already +3, and I have a limit of +10. So, I buy 14 levels of this...or do I? I'm pretty sure I'm limited to 10 ranks in any power, but I don't know if this applies to Enhanced Ability. The sample characters have more than 10 Ranks in this, with the only limit being the end modifier. I decide to go with this, while acknowledging I might be wrong.  I also decide to grab Super-Strength--it won't boost my combat ability, but increases how much he can lift and throw and all the crazy super power stuff we're used to. I decide on a whim to just give him 4 ranks in this, which costs me 8 points. He needs some for of "super movement" so I grab Leaping. Each rank doubles have far he can jump--I want him to leap across roof tops, but not leap across cities. I limit him to 4 Ranks in this, for 4 points. I also give him Speed of 4, which will allow him to run roughly 100 MPH.
Between my attributes and powers, I have spent 74 Power Points and have 76 left.
Step 4: Feats
M&M has a lot of Feats one can choose, and I'm at a bit of a loss of what exactly to get. Fortunately, they have a list of "Fighting Styles" and I decide to go with that. As Gracchi is a "scrapper," I want him to be pretty talented when it comes to fighting, so I go ahead and grab the recommended Boxing feats of All-out Attack, Defensive Attack, Elusive Target, Improved Block, Power Attack, and Takedown Attack. I also grab him the Wrestling Feats of Chokehold, Improved Escape, Improved Grab, and Improved Pin. All of these cost him 10 points. 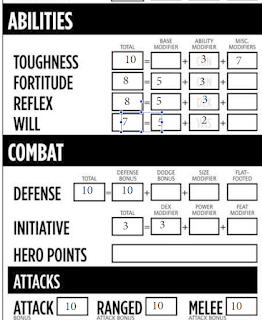 I now flip back to the beginning of character creation to grab some abilities I skipped earlier. First, I focus on Attack Bonus. It's maximum value is limited to the Power Level, and it costs 2 points per rank. I spend 20 points and bring it up to +10. I also spend 20 points to improve his Defense to 10.  I've now spend 129 points, and need to boost my other Saving Throws (Fortitude, Reflex, and Will). I have a base value on these due to my attributes, and each rank costs 1 points. I spend 5 each (15 total) on these.

My Toughness is already maxed out due to my Protection super-ability, so I don't spend any points there. Gracchi's initiative is solely based on his Dexterity score of 16, giving him a +3. At this point, I've spent 144 of my 150 points, leaving me with only 6. All I have left to buy are my skills.
Step 6: Skills
Skills are measured in "ranks" and I'm limited to Power Level + 5 in any of them. Each Power Point gives you 4 Ranks to spend in any skill you want. With 6 left, that means I can get 24 Ranks. There are about eight skills I really want Gracchi to have (Acrobatics, Bluff, Climb, Gather Info, Intimidate, Knowledge: History, Knowledge: Streetwise, and Stealth). I figure I'll just stick 3 ranks in each for my remaining points.
Final Thoughts
Despite having played, and run, Mutants & Masterminds in the past, I'm still not certain I built Gracchi correctly. I'm sure I made a mistake or two somewhere in the process, but I'm not sure where.  It was also a pretty tiresome process, to be honest, particularly coming off of Silent Legions and Thousand Year Old Vampire. There's a lot that I do like about Mutants & Masterminds and I would love to be able to play in a game of it again, but you really need to have a very focused concept for the character as well as plenty of time to get everything just right.
Here's the final sheet for Gracchi. 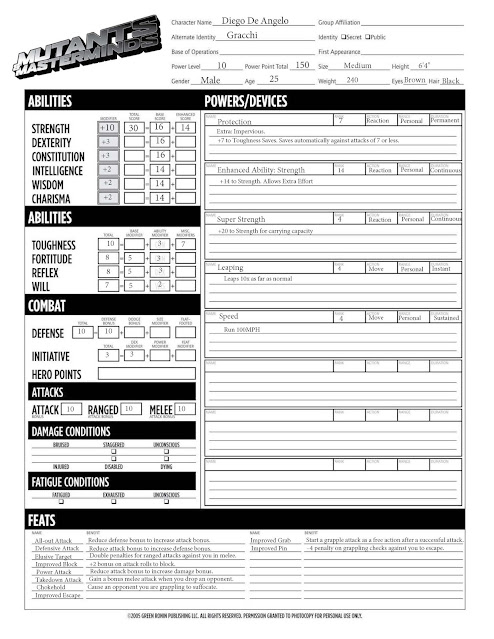 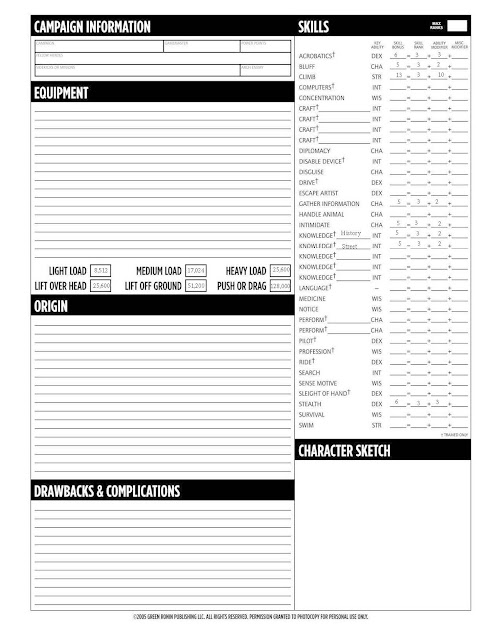