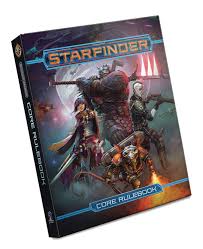 This post is a little bit of a cheat. So far in this series, I've been using a random number generator to decide which game I would be creating a character for. So, for example, on Day 1 I used a random dice roller and rolled a custom "D31." Comparing the result to the chart I made, I ended up with Mechwarrior. And all subsequent posts since then have followed the same basic format. But for this post I'm deliberately choosing Starfinder.

The reasoning for this is pretty simple--I need to make a character for a Starfinder game. Technically, I already have a character in the game, but it's going through a bit of a change. My current PC isn't quite working out the way I wanted him to, and so I want to try something else. I have a better feel for the group and its interactions now, and I feel like I can make a character I'll enjoy a bit more this time around.

Starfinder itself is something of an odd game. A mix of Sci-Fi and Fantasy, Starfinder sets the characters loose in a wild and woolly universe. It is derived on Paizo's Pathfinder game, itself a descendant of the Third Edition of Dungeons & Dragons. As such, the base mechanics are fairly "classic"--for example, having Strength, Dexterity, Stamina, Intelligence, Wisdom, and Charisma as Abilities-- and not all that different from other D20 games (for example, Mutants and Masterminds).

Unlike it other posts for this series, I won't be using a randomizer to come up with a concept, as I already have one in mind. My previous character was a highly intelligent and skilled Human Operative who had a mix of stealth abilities, technical skills, and fast moving attacks. He didn't really work out for the game I was in. This time, I want to go with a sheer brute, a massive warrior who barrels through his foes with the biggest damn hunk of metal he can carry.  In Starfinder, each of a characters attributes begins with a value of 10 (for a +0 modifier). I go ahead and make a note of that on my character sheet before moving on.

Next, I need to pick a Race for my character. In the back of the book, there are various "Legacy Races"--i.e., those that are explicitly fantasy ones. The Half-Orc is appealing, but I decide to go with the Vesk. The Vesk are a warlike reptilian race, and the settings default Proud Warrior Race--which is pretty much what I'm looking for. As a Vesk, I get +2 to Strength (raising it 12), +2 to Constitution (raising it to 12), and a -2 to Intelligence (dropping it to 8). I have a default of 6 Hit Points, and the following abilities: Armor Savant (+1 to Armor), Fearless (+2 to Save vs fear effects), have Low-Light Visions, and have Natural Weapons (always considered armed, and fists do 1d3 damage). I update the sheet accordingly.

Theme's are a bit of a change up in Starfinder, allowing further customization. If you have two soldiers, one who is an Ace Pilot is going to be different from one who is a Bounty Hunter. I pick probably the classic Vesk one of Mercenary. It gives me reduced DC's on Profession (Mercenary) checks to remember things about various units, the skill Athletics as a Class Skill (and a +1 if it already is one for my class), and a +1 to Strength. This brings my Strength up to 13.

There's really only one choice for me--Soldier! I could go with Solarian and play a Not-Jedi melee guy, but this isn't what I'm really going for. There will be a lot to work in a later step--for now, I just need to pick the class. 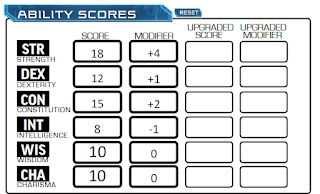 Now that I know what Race I'm playing and what Class, I finish up my Ability Scores. I have 10 points to spend on Abilities, on a 1 for 1 basis; though none can be higher than an 18. I immediately spend 5 points on Strength brining it up to 18. I spend 2 points on Dexterity raising it to 12 (+1) and the remaining 3 points on Stamina brining it up to 15 (+2).  I still have that 8 in Intelligence, which I'm not happy about, but I decide to leave it alone for now. Hopefully I can increase it through leveling up in the game. 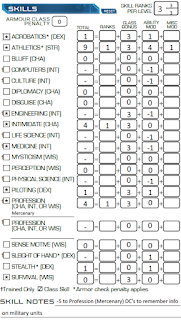 Now I figure out all the various things a Soldier can do, and how they apply to my character. As a Soldier, I begin with 7+Con Modifier in Stamina Points (which represents grazes and minor "flesh wounds") for a total of 9. I also gain 7 Hit Points (actual, life threatening damage) and add those to the ones I got for my Race (6) for a total of 13. I get 4+Int Modifier in Skill Points. With my Intelligence of 8, that means I only get 3. My Class Skills are Acrobatics, Athletics, Engineering, Intimidate, Medicine, Piloting, Profession, and Survival. I can spend my skill points on any skill, but I get a bonus with these. I only have 3, so I decide on my Theme skills of Athletics and Profession (Mercenary). With my remaining point, I at first think of picking Piloting so I can help with shooting the ships guns, but upon review the attack roll is based on either Piloting ranks or Base Attack Bonus. As a Soldier, BAB goes up one per level anyway, so it won't make a difference. I decide to just stick it in Intimidate in case that ever comes up. I end up with a 9 in Athletics (with the +1 from my Theme), a 4 in Profession (Mercenary), and a 4 in Intimidate.

I also begin Proficient with Light and Heavy Armor and with basic and advanced melee weapons, small arms, longarms, heavy weapons, sniper weapons, and grenades. I have a +1 Base Attack Bonus, and a +2 to my Fortitude and Will Saves, for a total of 4 and 2 respectively. I also have a +1 Reflex Save thanks to my Dexterity. Last thing I need to pick is my "Primary fighting style" and "Primary style technique." I pick Blitz as it is "all about using speed and aggression to get into the thick of melee." The only technique I get for this is Rapid Response which gives me a +4 to Initiative and +10 to my speed.

I accidently skipped ahead and did Skills as part of Step 6, so all I need to do now is pick a Feat, those special little quirks that let you do something special. I go ahead and grab Cleave which allows to make a second attack if the first one hits. 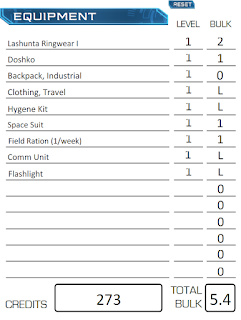 1st level Starfinder characters begin with 1,000 credits to buy gear. My top priorities are to buy the best armor I can afford, and the biggest stick I can use to hit someone. Gear is Starfinder is also assigned a level, so I'm going to stick to only level 1 items. I spend 415 on Lashunta Ringwear I, which is the most protective suit I can get. It does have a -2 Armor Check Penalty, but as a Vesk I reduce that by 1. For my main weapon, I spend 240 on a Tactical Doshko, the traditional weapon of the Vesk. With only 345 credit left, I need to be a bit more picky with the rest of my gear. I also don't know exactly what I need, so I decide to just grab some of the basics. Each of these items have a weight, measured in Bulk. I can carry up to half my Strength in Bulk. Some, like my Armor have full Bulk (in this case, 2), others, like my Personal Comm Unit, are rated as L. 10 "L" items equal 1 Bulk. I should pick up a gun of some sort, but I'm not entirely sure what would be the most useful. I figure I can make that decision when I have a better idea of what kind of adventure we start off with, so I hold off for now. In the end, I have 273 to get by until my first adventure.

Finally, I need to worry about all the "other stuff"--some I've already handled in other parts of character creation, but some are fresh. For example, I need to pick an Alignment. I decide on Lawful Neutral for "Honor Bound Warrior." My Armor Class, Carrying Capacity, and Initiative have already been determined. For Deity, I go with Damoritosh, the traditional deity of the Vesk. His alignment is Lawful Evil, which means I probably follow a splinter faith. For Home World I pick Vesk Prime, and note my languages are Vesk and Common. As a first level character, I have 1 + Class Key Ability Modifier in Resolve Points. There are special points one can spend to replenish Stamina Points and power class features. I start with 5.   I also give him a name of Grimderlain.

Accepting that dear Grim was a pretty simple character to make, Starfinder still has a pretty simple character creation. Not as light or fast as, say, Silent Legions or anything, but far simpler and faster than GURPS or Mutants & Masterminds. The step-by-step process really helps someone unfamiliar with the game make enough meaningful decisions along the way, with only occasional instances of decision paralysis. I'm still thinking I should have found a way to boost my Intelligence a tad--having a character with almost no skills feels...wrong to me. C'est la vie, right? In any case, here's the final sheet. 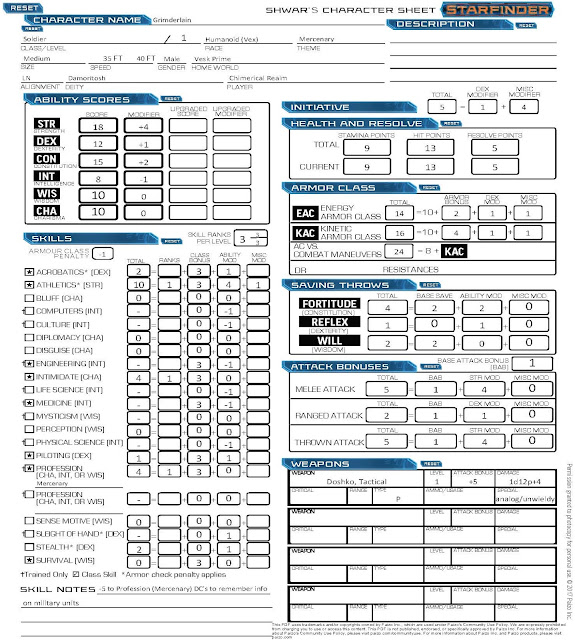 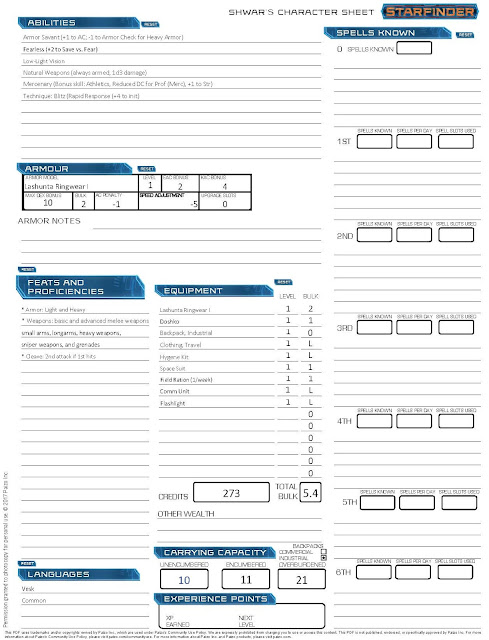