The player rolls 3d6 to determine Ability Scores, then picks either a Race or Class, so long as they meet certain basic requirements. Elves and Dwarves and the like are their own "Classes" for this edition of the game.  Most features are determined by the choice of Class, but there are a certain amount of other random elements later. By default, there are no "Skills" per se in this edition, but there is an Optional set of rules to cover these.

I start of roll 3d6 for each Ability--

A decent set of stats, and enough that I can pick almost any of the Classes--any save for the Mystic. In later editions, I would pick a class that works with the 16 Charisma. But, while all benefit from a high Charisma, none of them are actually based around it.

Instead, I decide to go with the 13 Wisdom and choose to play a Cleric. As a Cleric, this character can use any armor or shield, but can not use any edged or pointed weapons. He does possess the ability to Turn Undead, but can not cast spells until 2nd Level. With a Wisdom of 13, he gains an Experience Bonus of 5%.

Clerics have Wisdom as a Prime Requisite, so I would benefit from that as high as possible. I can take two away from any Ability to increase the Wisdom by one. But, I can't mess around with Constitution or Charisma, and Dexterity can not be lowered. I'd need to increase Wisdom to around 16 to really benefit from this increase, which means taking a -6 split between Strength and Intelligence. Strength is already suffering enough, and I don't like playing characters with extremely low Intelligence, so I decide to leave things as is.

A Cleric begins with 1d6 for Hit Points. I roll and get a 4.

I go ahead any buy the "necessities" first--Mace (classic Cleric weapon), Plate Armor, and a Shield. All together, this cost me 75 of my gold. I spend the rest on a Holy Symbol and general adventuring gear, leaving 12 gp--I can use these for specific gear once I have a better idea just what kind of threats this character expects to face. 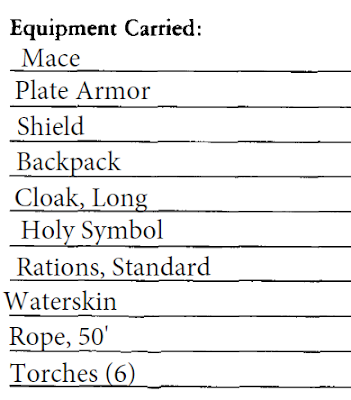 Step 7--Determine Other Numbers and Rolls 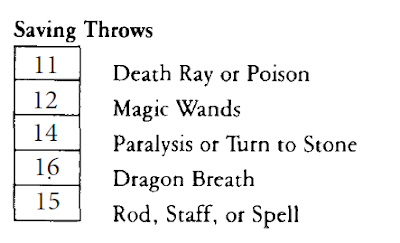 I actually make a note of the Ability Score modifiers here, even though they could have played a factor in the character already--for example, a high Dexterity could have improved the Armor Class. The only modifier that matters at this point is Constitution. With a value of 15, this character begins with +1 Hit Point, bringing the total to 5.

There are three possible Alignments--Lawful, Neutral, and Chaotic. I decide to go with "Lawful." As a side note, the character speaks Common and the Lawful Alignment Language.

"He/him" has been popping up in this post so far, but I actually haven't decided on a gender yet. I toss a coin and get a female for this Cleric. I flip to the UNE. I don't think I've actually used Latin so far for a character in this series, so I decide to go Ancient Roman. I roll a d20 (13) and a d100 (24) and her name will be Livillia Pertinax.

For personality, I see her as a serious but friendly individual, always willing to help when possible, but wise enough not to be taken advantage of. She is suspicious of those who follow Chaos, but willing to withhold judgement and allow herself to be pleasantly surprised.

Background is something that needs to be determined with the rest of the party and, more importantly, the Dungeon Master, so this part I skip.

This is where you "level up" the character after adventuring. As a 1st level character, this step does not apply.

When I first say the "Twelve Steps" for creating a character when skimming the rules, I was a bit put off. Just seemed far more complicated than I had anticipated, and I had even run the game before! But, each step just covered a single, often simple, thing for Character Creation, so it all went very fast.

Compared to other characters I've made, Livillia doesn't have a huge amount of depth, or at least little that I can take from her mechanically. This is mainly due to the lack of a built in skill system, but I've honestly never felt that these provided much of a benefit in D&D. What would make this character come alive isn't the stats on the page, but rather how the player embodies her. 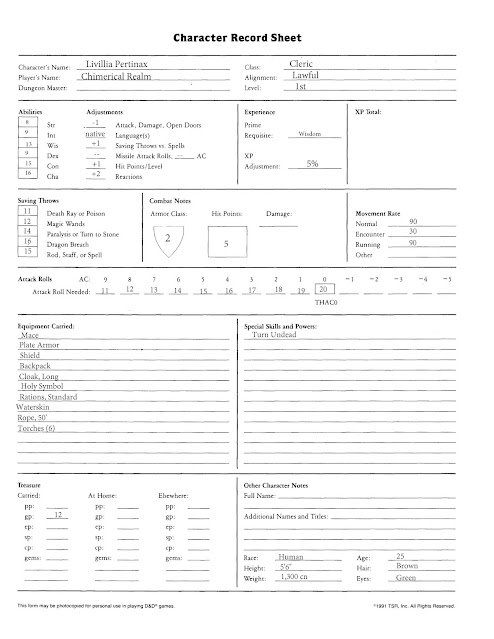