Now that I've decided on which area to zoom in on for the next step, as well as a general idea of who lives there and who they are, it's time to focus on the geography and basic terrain of the Kingdom.  Since I'm working my way way "down" from the world stage, most of the major features are already accounted for--the major rivers, mountain ranges, coast lines, etc.  I use a combination of advice from the World Builder's Guide and whim to fill in the rest--I added some forests, swamps, scrub land, hills, and a few islands.  Below is the basic terrain for the Kingdom of Galicia. 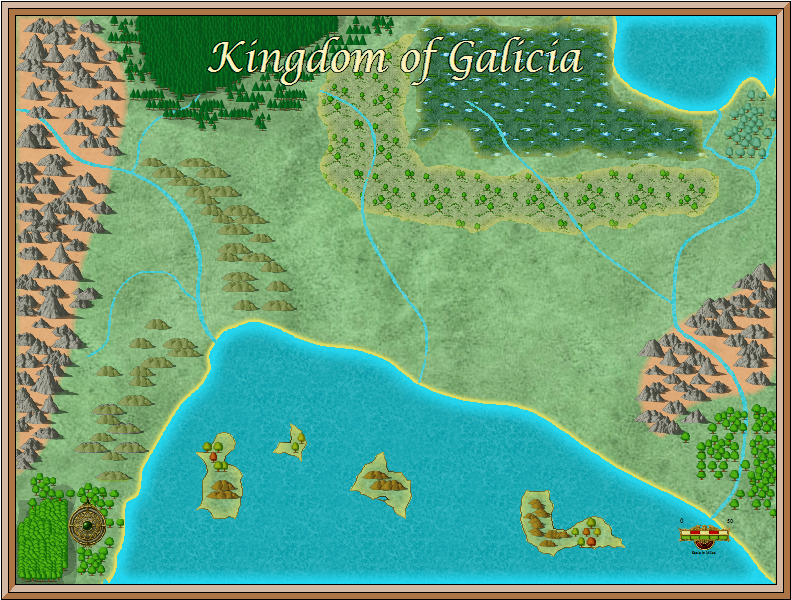 Next up, I'll need to start looking at where the people live.  Just as a reminder, I have a variety of people to place:

Humans 1--the dominant group, by power if not necessarily numbers, are the Galts, who conquered this land from the decaying Elven Empire.
Humans 2--by far the most numerous, they are the Umbrian people, who have been under the heel of one conqueror or another for centuries.  Most of them have been reduced to serfdom under the Galts, but a number find some measure of freedom in the handful of towns and cities that still remain.
Humans 3--the descendants of the humans who incorporated themselves into the Elven Empire generations ago.  They were once the dominant power in this land, but now they most navigate between the hatred of their formed Umbrian subjects and the suspicious Galts.  While originally of mixture of Umbrian and other human stock, they are now referred to as Fairians, due to their long and continued association with the Elves.  They are the most educated and the most mercantile of all the peoples of the realm.

Dwaves live among the humans, but mainly in the few towns and cities that still exist.  I've decided that I like the idea of a millennial long struggle between the Elves and the Dwarves that ended with the collapse of both empires, so the Dwarves hold a particular disdain for the Fairians.  Given that both peoples tend to prefer to live in an urban environment, this means the two groups bump up against one another often.

Finally I have Orcs, Goblins, and Dragons.  The Orcs and Goblins most likely inhabit the same lands, with the Orcs being the dominant force.  I assume that they rose from deep in the earth and were part of the cause of the collapse of the Dwarven Empire, and as such they tend to make their homes in the mountains and the lands surrounding these hills.

The Dragons are a bit more complicated.  Any given Dragon can range from "bad ass apex predator" to "scheming Machiavellian mastermind" to "Dark Lord."  I don't have a particular idea for a Dragon or Dragon's to have a lot of influence in this land, so I'll say that are more of an "apex predator" type for now.  Their numbers are few, but each is significantly powerful.
at January 27, 2013