I've finally sat down at created a map of the initial play area.  Right now, it's still in "beta"--the basic terrain and settlements are there, but it still needs some work before it's ready to be done.  Here's what I have so far. 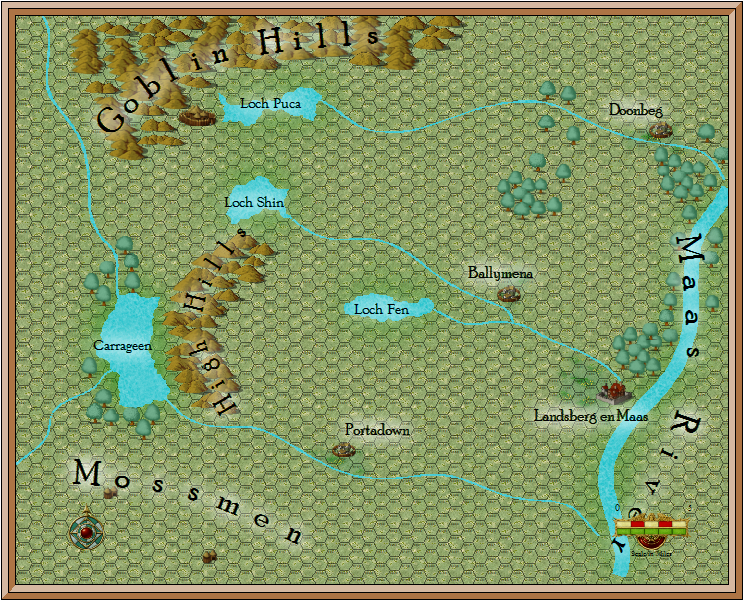 None of these locations would be larger than a village, and some are even barely that.  The largest, Landsberg en Maas, is the home of a minor Galtic noble who is technically the Baron of this land, but his actual authority doesn't extend any further than the few miles around his village.  He's undertaking an ambitious program, both trying to build a proper stone keep as well as beginning to drain the bog to make it more suitable for agriculture.  Landsberg would be the trade hub of the area, and despite it's small size, would have most of the gear and services that a team of adventurers would need.

The three Umbrian/Bog People villages would have only a few hundred members each. From north to south they are Doonbeg, Ballymena, and Portadown.  Doonbeg, being the closest to the Goblin Hills, is the most heavily fortified of them all, with a stout wooden pallisade and a crude moat.  Until recently, it was the dominant village of the area, as it formed the first line of the lands defense against goblin raids.  Recently, Portadown has supplanted it in importances, and they form the key middlemen in trade between the Galts and the Mossmen.  In general, the people of Doonbeg are the most concerned about the presence of the Galts in this land.  Despite the Baron's promises, the Boonbeger's believe they intended to permenantly alter the land, destroy the Bog People culturally, and force them into serfdom.  The people of Portadown and Ballymena are more impressed with the easy trade and coin flowing from Landsberg, and willing to work with them.

The Mossmen still don't trust the Galts, but continue trading with their longtime partners.  It is unknown if they understand that the recent increase is demand for peat and other resources is tied to the Galts or not.  They are an inscrutable people.

Aside from the lakes and the Maas River, the waterways of the land are barely navigable, being to shallow to support most boats.  Aside from transporting bulk goads, most travel is done overland. The reason the Umbrians choose their village sites is more to do with terrain than trade.  They sought land that fit their style of agriculture, had decend fodder for their animals, and was near a fresh water source.  They also look for areas that are slightly raised compared to the rest of the land.  The river Maas has a tendency to flood unexpectedly in this area, and the ground around is far to wet for their comfort--a local fact that the good Baron is only starting to learn, to his chagrin.  Next up, I'll start detailing the individual villages.
at January 31, 2013