Changes, and a COLOR MAP!

So, after a bit of doodling, I ended up rethinking me Regions.  Not by a lot, I just felt that there was too much sea in my initial choice, so I shifted it slightly Northward to give it a bit more terrain.  After that, I followed the World Builder's Guide pretty much strait.  I ignored some of their advice on foothills and rolling hills and the like.

Perhaps I should explain.  The WBG does an excellent job trying to emulate real world geography.  As we all know, mountains don't just appear out of nowhere (well, they normally don't, at least).  There's pretty much always an intermediate step of rising hills and the like.  In fact, some of these hill systems can be miles away from the nearest mountain range. The WBG includes rules for placing these intermediate terrain features.

Unfortunately, whenever I've in the past tried to follow the WBG in this regard, I've always gotten crap looking maps.  Part of it may have been my drawings, or the colors I've used for it, or maybe the programs I tried to use (Hexographer, in the most recent case)--I'm not sure why, but the maps were really busy and just...bleh.  So, this time I decided to skip that step.  I'll keep their advice in mind, and try to bring them in when we zoom into the next level down, but for now we're just going with the broad area.

Which is good, as this current Region covers an area of 3,500 miles x 2,000 miles, or roughly 7 million square miles.  At this scale, we really are better off not sweating the details.

I continued following the WBG's advice for general terrain however, as well as races.  The WBG assumes that it's more than just Humans and Elves and Dwarves who can build nations and rule over vast terrains.  Since I'm going with a Dark Ages vibe, the idea of distant lands ruled by foul overlords needing to be Crusaded against or entire savage kingdoms that need to be "saved" totally works.  I get Human for a dominant race, and then a smattering of others.  I spread them around the map, using some of the WBG's tables, but also sometimes my own gut.  Here's what I get: 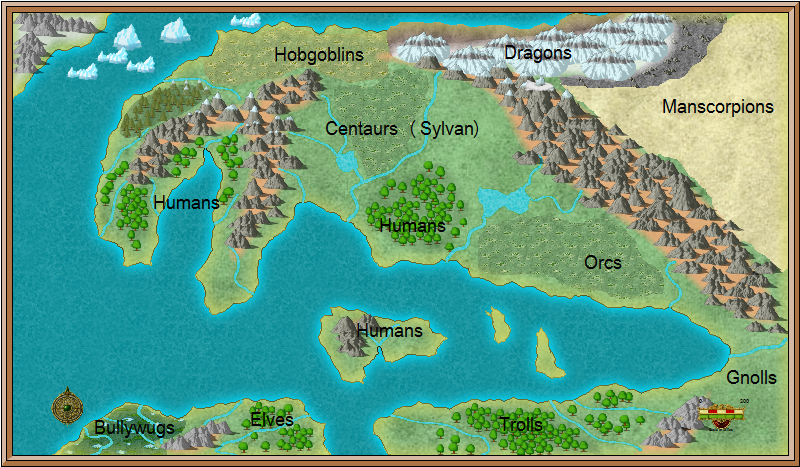 .
In case you're wondering, yes, that is a Campaign Cartographer 3 map.  I've owned the program for a while, but always been intimidated by it.  Figured this was as good a time as any to sit down and try to figure it out.

I'm not entirely sure what to make of this map.  Of course, these are only the most dominant groups--there could be, and probably are, dozens if not hundreds of other races scurrying around.

Here's where my thoughts are currently.  The entire region was once ruled by a mighty Elven Empire.  Eventually, it fell--I'm not entirely sure why yet.  Massive war with a rival power?  Attacked by beings from another dimension?  Plague?  Crippling low birth rate?  In any case, part of the reason for this collapse was wave after wave of various barbarians and monsters.

Going North to South, I assume the Humans were one of the Barbarian groups that stormed the lands, most likely under the leadership of the Hobgoblins.  Maybe not, not sure how much it matters.  Anyway, the Humans of the ppeninsula are most likely are classic "dark ages medieval Europe" people.  The ones to the center are probably more closely tied to the other races, and are probably of a different stock (Goths vs. Vandals?).  The Centaurs I rolled and...well, didn't really wow me.  But, then I had an idea--what if they were the remnants of the Elven Empire in the north?  What ever caused the collapse devastated the landscape, and now only a handful of powerful sylvan creatures survive up there, with the Centaurs being the most capable of surviving and thriving in the new steppes--as such, they are the ones most outsiders associate with that land.  To the south, we have a group of humans on an island--I'm sort of assuming these guys are another Imperial remnant, focused on trade and commerce and slowly starting to build their own empire.  These were probably "civilized" humans who once lived under the Elven yoke.  Now that they are free, they are eager to place that yoke on others.

Circling around the sea, we have Orcs, Gnolls and Trolls.  I like the idea of the Trolls occupying the Elven Heartland, stomping all over their pretty crystal palaces with their gross regenerating feet.  Not sure about Troll's having a civilization, though.  It's probably a monster filled land, with a variety of creatures  of whom Trolls are either the most numerous or the most powerful.  I might include some sort of secret overlord or something, but I'm not going to worry about it for now.

I have no idea what to do with the Orcs and Gnolls.  For now, I'll leave them alone until I come up with a better idea or replace them.

To the South West, we have two races--Elves and Bullwugs.  The Elves are clearly a rump Empire, a tiny remnant of their old glory.  While still a force to be feared and individually quite powerful, they are a dying people.  So weak, they can't even kick the Bullywugs off their Island!  Of course, something is slowly warping the land to the west, turning it marshy and swampy and an ideal home for these creatures.  There is DEFINITELY someone or something aiding the frogmen.

To the Northwest we have an odd combination--glaciers and desert.  Well, not that odd if we think of a desert as "dry" instead of hot.  But still, Menscorpion?  Well, I rolled them, and there was nothing on the chart of "cold deserts."  The MM describes them as living in vast underground cities, only venturing to the surface to hunt and kidnap slaves.  In this world, this is something they do during the summer months--winter is the safest time to travel in this particular desert.  And finally, to the north of them, we find a region dominated by Dragons-obviously White ones.  Not sure why, but I've always had a soft spot for these small dumb bastards, and I love the idea of having them in this world.

Finally, there's an oddity with this map--no DWARVES!  As much as I love dwarves, I rather like this.  Most likely, the won't be prominent anymore--something must have destroyed these ancient people?  Was it the Elves, in the final battle that exhausted both Empires, leaving them vulnerable?  Was it something rising from beneath?  Or were they just wiped out in the barbarian invasions?  Not sure, but this might be the first big mystery of the campaign! 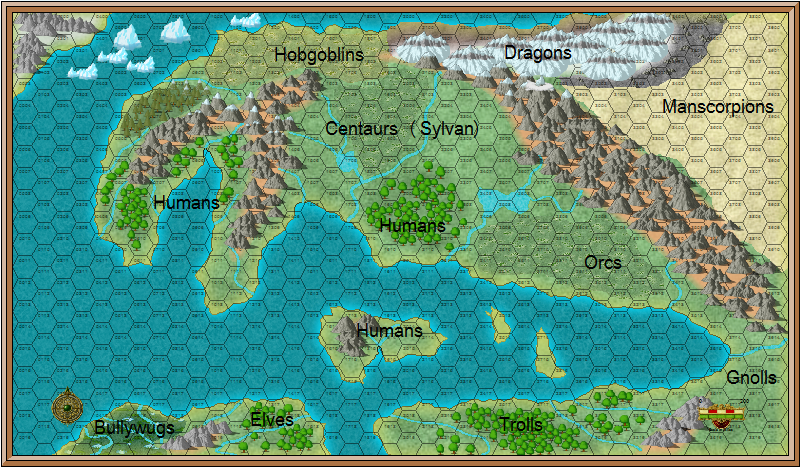