Transylvania Chronicles I
Dark Tides Rising
Act I: The Making of Princes

Summary The characters are summoned to Buda-Pest to meet their would be Patron (decided by Coterie Concept). En route, they come across a slave auction and witness a slave escaping; they can choose to intervene or not. They are confronted by a mad Malkavian prophet foretelling their involvement in great event to come. Their patron assigns them the task of building a fortress, and they are given money and men to accomplish this. As they travel to the build site, they are ambushed on the road, destroying their men, supplies, and wealth. A Myca Vykos provides them aid, and they meet with a local Prince. When they get to the building site, they meet Lucita and Anatole, who help them acquire ancient tablets (a “subplot” from their patron). The players begin building, and need to recruit Zelios, a master architect and Kindred. Short on funds, Myca Vykos again appears and offers them financial aid in completing the fortress. With the successful completion of the task, the players are rewarded with one of the unclaimed cities as their own Princedom. . 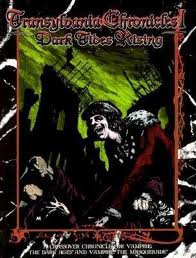 Key Factors The slave girl (Sherazhina by name) seems somewhat key. The players being at the original building of the fortress. Revelation of the prophecy. Retrieving the ancient tablets. Getting into debt to both Myca Vykos and Zelios.

Initial Thoughts This is an alright adventure, but much of it feels forced. Depending on concept, the players may or may not be remotely qualified for the trek to a barren land and the construction of a fortress. There is very little for the players to do, save to react to various NPC’s. Myca is rough, as twice he shows up to offer the coterie critical aid just when they need it most. Even if you play him as nice and friendly, he sure seems suspicious, and players might balk at having to accept his deal. Zelios sort of comes out of nowhere, though the players are supposed to be sufficiently impressed/indebted to him to try some crazy stuff later on his behalf. Also, the whole “becoming Prince” seems like an extreme reward for such a task, and I fear it may not play out as well as the authors intended.

Fixes Scrap the building of the Keep--that’s ghouls work. Instead, the players are sent to find out what’s happening. Their Patron had previously sent their childe to the location to do the building, and all was going well until the reports back became sporadic and full of odd references to disturbances. Then, nothing. One ghoul was able to make the trek back, reporting that the childe has vanished.

The players are sent to find out what happened, retrieve the childe if possible, avenge him if not. They still do the slave auction. It’s fun, though the one time I ran this in the past, a PC on the Road of Sin took Sherazhina. She made the poor girl into a sex slave and whore, rarely if ever even bothering to talk to her about anything but her pleasure and humiliation.

The prophecy...ugh. I hate the way it’s setup. Too forced, too gamey. Maybe instead of springing him on the coterie, have them seek him out. Something to do with the ghoul who survived, who sneaks out to meet with him for advice. Let the players go to him, rather than him coming to them.
The patron gives them the task (find out what the deal is, and deal with it). They are given armed escort and two ghouls--one a survivor of the previous expedition who knows the people and the area, the other to actually take over building the damn place. The ambush happens more or less as is, but rather than all their gold getting burned in the ambush (which I have never understood the logic of), the key is survival on their own.

Crit: The players survive, keep both ghouls alive, and are able to capture one of their attackers. If interrogated, he will gleefully talk about the Mitru and Arnulf. A “diplomatic” meeting with the Gangrel Elder becomes possible. (bonus 2 XP)
Succeeds: The players escape, and keeps at least one ghoul alive. Things are very, very rough. (bonus 1 XP)
Failure: Both ghouls and other men die, characters barely escape with their unlives.
Botch: Players are torpored and captured. Arnulf takes them and intends to sacrifice them the Old Way, to the Old Gods. Players will need to escape (he uses his ancient vitae to awaken them from their sleep, as they need to be aware of the sacrifice).

Assuming they survive the ambush and get to the Keep, the place is a wreck. They meet Lucita and Anatole who offer them their aid (how much depends on the number of PC’s--if Solo, they become effectively henchmen of the PC, if more then it’s advice and support). They’ll help out as needed with the event (though leaving if or when they seem annoying or not working), in exchange for the copy of the tablets, which plays out more or less as written.

The haunting spirit is a mess, and the players most likely have no way of defeating it. Through either their Patrons, Anatole, the Ghoul or a nearby monastery (in case the players want to hit the books themselves), they are directed a scholar named Myca Vykos. Myca will need to be bargained with to give up the information he has, and will extract a sizeable “boon” from the coterie for his aid. How to defeat the spirit will depend on the players--if combat ready, it’ll probably end in a fight. Social heavy will involve either haggling with it or recruiting the local townsfolk to participate in a big ritual. If Intellectual, it will be a complex ritual they need to perform.  Also, the nature of the task will depend on the Road of the players. There will be at least two options--one “easy” choice low on their Road, and one “hard” choice high on their Path.

Like, let’s say I have character who is a bad ass Gangrel warrior on the Road of the Beast who is Physical/Social. The easiest thing is to perform a simple ritual (wave salt in the air or something), force the spirit into material form, and fight it. But, after a round it will plead for mercy and promise to never return. Showing Mercy is a Sin of 2 on the Road of the Beast. Or, the player can take a harder path, find a “true innocent” and peacefully lure her to the site (for she must be without fear), and then torture her (Sin 6), and her blood and tears will drive the spirit away. There is a third path, but that requires additional research on their own (Academics and Occult) for them to kill the damn thing without breaking their Road, but that they need to come up with on their own.

Then, there is a choice which involves totally embracing your Road, but doesn’t actually solve the problem. Road of Beast boy would ritualistically claim the site as his own, and the Spirit would have to leave it alone, at least for a while.

Not sure what to do with Zelios. Maybe just have him already on site, and ready to leave. The players will have to haggle with him to get him to stay (and thus fall into his debt).

Can the players fail this Act? Oh, my, yes. Death and torture are possible. More importantly, they can fail utterly to defeat the spirit. If they fake it, it comes back stronger than ever to haunt the keep, and the players are rightly blamed for their failure. If they screw up the ritual, the spirit becomes attached to them (whoever was the primary performer of the ritual), and makes their lives very interesting going forward. If they just screw everything up and/or get their assess torpored, then their patron is forced to ally with a coterie the party would HATE (Ventrue on Road of Heaven for my Road of Beast example) who succeed where the party failed.

Also, it would sure be nice if there was a decent overland map for this adventure.

I'm still leery of the Princedom reward. My gut is that it's a bit much, mainly as I saw it backfire in the one game of this I played in. I want to instead make it more minor, that the players are "released" as full members of the Kindred community, Maybe get a little neighborhood as "their domain" or the like. But, the subtitle refers to them as Princes, so maybe this is important later on. So, I'll keep the Princedom reward for now, but if it's not necessary, I'm probably going to change it.