Summary: It is 1680, nearly 200 years since the characters witnessed the rebirth of Dracula. Maria Asuncion, the last of the Cappadocians and final survivor of the Giovanni purge, comes to the characters seeking sanctuary. If there is a Giovanni character, they are approached separately by their clanmates looking for their aid in hunting down Maria. Word soon spreads of who the characters are protecting, and powerful Kindred from across Europe come to attend a “festival” in the characters domain. There, numerous faction seek to beg, threaten, cajole and bribe the characters to decide the final fate of the Cappadocian. Regardless of their choice, Maria takes matter into her own hands and offers herself up to her foes. Despite this, the decisions the characters made will continue to haunt them going forward.

Key Factors: Final fate of Maria, and which of the various factions--Camarilla, Sabbat, Giovanni, Baali (!), Tremere, etc--the players either worked with or offended in the process. 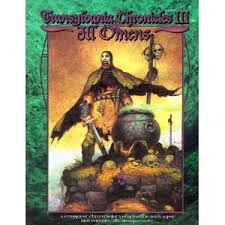 Initial Thoughts: This was a really solid and fun adventure. I’ll admit, at first I was leery. Another “oh so important NPC” gets involved in the characters lives, oh, this is going to be great. But instead, the characters remain the decisions makers and the stars.  Like Act IV, it’s another party full of powerful NPC’s; only THIS time, they’re coming to the characters, and the characters have the power.

What do the players do with Maria? Honor their agreement and keep her safe? Sell her off to the Giovanni for gold, the Tremere for power, or the Baali for knowledge? Hand her over to the Toreador as a kept pet? Do they make their decisions based on morality, and if so whose morality? For the first time, the Roads and Paths the players are on really do matter, and have an effect of the game. If not morality, than what is their guidepost? Each faction can offer some sort of rewards, but what do the characters really value?

Honestly, I only have a few issues, and all of them are minor. One, is the potential Giovanni character. I like that they included it, but how damn awkward is it for a new player (or at least new character) to be placed in such direct opposition to the rest of the group in their first appearance? It’d be one thing if it was the Lasombra vs. the Ventrue, when they have 500 years of history between them already. As a side note, how damn weird is it that the Sabbat and the Camarilla just sort of...allows the Giovanni to murder the Cappadocians. I mean, I guess you could say that they view it as an intra-clan matter.And, ok, maybe the Venture don’t care about the Cappadocians, but surely a Ventrue cares about a Cappadocian, right?

Finally, I can see how Maria can come across as a “Damsel in Distress,” but honestly she’s really more of a Christ analogue.

Honestly, though, this whole Act reminds me of Sandman “Seasons of Mist” and that’s just fantastic.

Don’t really have one. It’s weird, but this is the first Act in all of the Chronicles that I’d run more or less as written. Now, of course, it’d need to be customized--but that’s something the Act explicitly calls for. You’d want to bring in significant NPC’s based on each character’s past, and bribe and pressure them based on their own desires and previous actions. Even better, it points out how various decisions here will affect the subsequent Acts in Book III.

Ideally, I’d love to base this around party dynamics. In most troupes I’ve played with, a “party leader” naturally emerges, generally based on the one player most willing to make decisions. This character would be the guardian on Maria, and it’s the other characters getting the pressure from the NPC’s. So, there would be real arguments among the players, perhaps based on their own agendas, and the various secret bribes they are receiving behind the other players backs.

Long story short, this is the first Act that I WANT to run. Even if I didn’t end up running the Chronicles themselves, this Act is going to show up in any Chronicle of Ages I end up running.

Seriously, Twilight of the Graverobber is like a breath of fresh air.