Let's Compare the different editions of Vampire: The Masquerade
Clans, and their Flaws

The Clans have remained one of the great constants throughout Vampire's run. While 1st and 2nd listed only the Camarilla Clans in the core book -- Brujah, Gangrel, Malkavian, Nosferatu, Toreador, Tremere, and Ventrue -- the Sabbat/Independent Clans still certainly existed back in these early days, even if they were then restricted to the Players Guide. What basic changes there are between editions tends to be more a result of shading and nuancing the Clans rather strong initial archetypal presentation, rather than a wholesale re-imagining. The Sabbat and Independent Clans more so that the Camarilla ones, as these were often initially conceived purely as antagonists to the players, rather than as viable characters in their own right.

The changes between the editions for a few of the Clans, at least in terms of the core book, has been in their flaws. The main ones are: 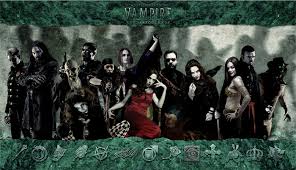 Assamites: in Revised, Assamites have a Blood Addiction. If they ever taste the blood of another Vampire, they might develop an addiction. The next time they "come in contact with Kindred vitae" they most roll to avoid entering a frenzy and consuming as much as possible. I'm honestly not sure how this Flaw works--does the vinuculum count? Because if so, how the hell is the Sabbat still functioning? If not, how often does the Flaw even come up? I assume it's not triggered by being sired, after all. In any case, V20 brings back the original Clan flaw, of not being able to commit diablerie at all--in fact, attempting to do might even kill the character. I always felt this was a far more interesting Flaw. After all, the Clan is deliberately created to be the perfect killers of vampire and sacred mystics of diablerie. Making them incapable of "sealing the deal" is a lot cooler than "they're just TOO damn good at killing people."

Toreador: The flaw remains the same -- becoming entranced by beauty -- but the resit roll changes from Willpower to Self-Control. I suppose this is the result of "cleaning up" the system in the major change from 2nd to Revised, as Willpower stopped being a thing you rolled, and instead became a thing you spent much like blood pool.

Tremere: In 1st, each Clan member was straight up Blood Bonded to the 7 Elders of the Clan. Now, how one can be Bonded to multiple Kindred isn't explained. It sounds like a variation on the vinculum, but it's important when going through these not to "read backward." In 2nd, this is changed to only a "one step" bond to the Clan. Revised adds the note that "the difficulty of any Dominate attempt from a clan superior is one less." V20 changes this again--now Tremere become Blood Bond on only 2 drinks from any potential domitor, rather than the typical three. It also includes this note: "The elders of the Clan are well aware of this, and seek to impart loyalty to the Clan by forcing all neonate Warlocks to drink of the blood of the seven Tremere elders soon after their Embrace." Are V20 Tremere Bond to the Clan, a la 1st? "Two-step" (as per their flaw) to each of the seven Elders? I'm not sure. In Revised, does the Dominate bonus apply to any Clan elder, or just to a superior in the Pyramid?

Malkavaians didn't change all that much. Well, ok, the whole Dominate to Dementation thing happened, I guess having a derangement monster who can control your mind and impose his view of reality on you wasn't as scary as a deranged monster who couldn't predict what was going to happen next.  In any case, we'll look more into that change when we get to Disciplines.  The main thing right now is their Flaw. Now, the big change wasn't their flaw, itself, necessarily. They always had a "Derangement," after all. However, the answer to the question of "what is a Derangement?  And how does it affect the game?" has been answered in different ways in each edition. In fact, it's enough of a change to warrant its own post.

There are few other minor things with the Clans that I found interesting. The Brujah are described in 1st as creating several childer at a time, and calling these groups "packs." This was dropped in subsequent Editions, maybe due to fear of potential confusion with the Sabbat, or maybe the authors just didn't find the idea compelling -- after all, nothing like this crops up in the original set of supplements. 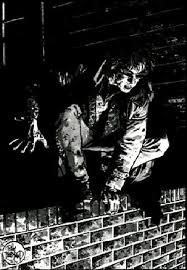 Also, there's the Gangrel/Gypsy thing. The "Gypsy" situation has been a long issue for White Wolf and Vampire. On one hand, they're an iconic horror element stretching at least as far back as the publications of Dracula. On the other, such depictions are often really, really racist. So, in 1st/2nd there is an understanding or alliance between the two groups. Sure, there's a myth that the Gypsies are the mortal descendants of the Gangrel Clan founder, but even within the text this is presented as a justification Myth--i.e., these two groups get along, therefore they must have a common origin or mythical connection back in the distant past. But, they weren't particularly close--it was more of a various travelers and wanders need to look out for each other rather than a direct connection.

As the Ravnos moved to a more prominent place in the game, this connection was lost from the Gangrel. The Ravnos, of course, are not "allied" with or "sympathetic" to the Gypsies; they are Gypsy Vampires. The do start referring to them by the more accurate term of Rom, of course, but it always struck me that the racist stereotypes, if anything, got worse with the Ravnos connection.