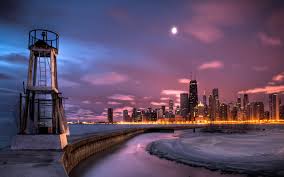 (Last time, Andrei's sister had worked out an alliance with the Tremere to discover an artificial replacement for vitae. This is a BIG DEAL, so I assume it's going to take some time to move forward. Basically, this thread is going to sit in the background for a bit. We begin a month or so later, as winter sets in on the Windy City.)

First thing I do is update the lists for my characters and threads. Nathan, Marshall, and Sergei are all added. "Money owed to Mafiya" is dropped, and "Mob War," "True Blood" and "Nathan's Sudden but Inevitable Betrayal" are added. I also decide that with his Herd, Andrei feeds well without issue, and start him with 11 out of 12 for Blood Pool.

As I mentioned in my previous post, I wanted to do something a bit different, and instead of using the random generation from Mythic for starting scenes, I'm going to use the ones from Chicago by Night. I roll against the list, and get a scene of a bunch of cats following my character around. I find this uninspiring for Andrei, and roll again. This one is more interesting "Intrigue: Night at the Opera."

Andrei receives a ticket to the Opera that night. Unsure of what this means, he decides to go with it. He assumes it's a vampire, as he's heard how much the Elders love their games. How well does he play the game? First, can he effectively fit in at the elite scene at the Opera? I have him roll Appearance (2) + Etiquette (1), at a Difficulty of (10 - Resources (2)) 8. With 1 success, he doesn't stand out TOO much. There's also a question of his actions, as this is not his normal ground. Charisma + Etiquette (Dif 7) gives him 3. That's enough to pass the little test, and he's escorted by some large men to a limo waiting out back.

Inside is Capone (yup, him), one of Lodin's top lieutenants.  Even Andrei knows who he is. Capone is willing to offer the neonate the opportunity of a lifetime. He claims that Lodin has granted him control over the Russian mob, but that he is willing to allow Andrei to have "street control" so long as he offers his loyalty and obedience in exchange. Andrei attempts to get some sense of what is going (and get a better deal for himself), and they engage in a Manipulation + Streetwise challenge. Andrei gets 1 success, while Capone gets 4. With a net 3, Andrei hears what he wants to hear, and Capone ends up getting everything he wants. Seriously Andrei, stop messing around with Elders...

And what DOES Capone want Andrei to do? For that, I roll on the Random Event Chart for ideas, and get "PC Positive," "Adjourn," and "War." I decide that Kevin Jackson (Lodin's childe in charge of the Bloods) also has a pawn striving to take over the Mafiya, and Capone wants me to bring some sort of peace, to avoid an all out mob war that will attract undue attention. That, and more importantly, it might annoy the crap out of Lodin.

So, who is this rival of Andrei's?


Ok. So, at this point I decide it's NOT someone from Chicago by Night, and instead a new player. I bust out my UNE, and roll some dice to see who this bastard is.
0. Pre-conceived facts: he's a vampire working for Kevin Jackson to take over the Russian Mob.
1. What is the NPC: Unconcerned Hermit
2. He is comparable to Andrei in power (also a neonate).
3. Motivations: Discover Zeal, Complete Affluence, Attend Slavery

I decide that Kasmir was recently released from prison. He used to be a terror on the streets, and was embraced by Kevin. He's completing the task his sire assigned him, but honestly he's bored and tired of the street fighting. He wants money, and wealth, but he wants it to live in refined idleness. His feeding restriction is that he can only feed from those who are enslaved (like most Ventrue ones, he can't just do it himself, the victim has to be enslaved by someone else.) I figure at this point that the Russian's are mainly smugglers, which includes human cargo; a useful connection for Kasmir.

At the end of the scene, I increase the Chaos Factor to 6. I add Capone and Kasmir to the character list, and "Mob War" to the plot threads. Andrei has heard of Kasmir (Int + Streetwise, 1 success) but needs more info. He calls up Sergei to try and get more information. I roll for randomness, and get a 6. For the event, I get "NPC Action" "Move" "Dispute." With little thought, I decide that Kasmir already knows about Capone's plans (well, Jackson does, and he passed the word along), and has decided to start taking out Andrei's support. There's a hit out for Sergei!

Normally I don't plan on doing a "blow by blow" for combat, but honestly? I kept screwing things up. I thought I knew how 1st Ed combat works, but I was wrong. So, I'm doing all the rules so you can all laugh at me

Sergei and Andrei meet in a hip and busy club. Sergei knows Kasmir, and is worried about this guy teaming up with the Bloods. He fills Andrei on the slavery connection (Int+Occult, fail, he doesn't "get" what this means for feeding). Suddenly, Andrei sees a gunman approaching the table.

I use Mythic to determine that Kasmir sent 1 hitman, and that it wasn't a human. So, a bad ass ghoul it is!

Round 1  I decide to do Narrative combat, by the book. I give Andrei a Perception + Streetwise, and the ghoul Hitman...crap. There's no stats for gang members (I should've remembered this from last time). I use the stats for a SWAT member. Anyway, he rolls Wits + Streetwise. Andrei wins by 5 successes, so he goes first. He spends a Blood Point to activate Celerity. With 5 successes, I also say that he sees that the target is Sergei, not him. So, with his first action, he grabs Sergei and throws him under the table. Strength + Dodge, 4 success. I declare that these will count as "dodge rolls" for Sergei. For his second action, he throws a bottle from the table, trying to distract the Hitman. Dexterity + Athletics, and fails.  Hitman attacks Sergei with a sub-machine gun. Even with the 4 bonus dodges, Sergei gets chewed up and takes 4 levels of damage.

Round 2 At this point, I realize that I had was confused by Narrative combat, which I've always run on sort of a "whatever" basis. I decide to go back to "standard" combat.  So, Andrei spends another Blood Point, draws his gun, and fires at the Hitman. He hits, but dude soaks everything, and Andrei tosses it aside in disgust. For his second action, he rushes in and attempts to Throw the Hitman. Andrei: 3 successes, Hitman 1 success. Damage 4, With the Throw maneuver, the Hitman should be stunned, unless he spends a Willpower point. Of course he does, since he's a badass ghoul. He spends a blood point to heal damage. He then fires two three-round bursts from his gun, and Andrei takes 0 damage and 3, respectively. That kind of damage risks Frenzy, and so Andrei rolls Courage. He succeeds, but barely.


This is my first major screw up. Andrei's melee attack should have changed things. In 1st Ed, Melee attacks are opposed, with only the winner doing any damage. So, both participants roll Dex + Brawl (in this case). However, Hitman rolled his Dex and Brawl, which should have prevented him from shooting this turn. Or he could have split his dice pool. In either case, he should have taken more damage from Andrei's throw, or not been able to attack.

Round 3 Andrei spends a blood point, and rushed over and knees the Hitman in the stomach. Hitman splits his die pool, but Andrei still succeeds with 2 damage after soak. He then decides he wants this bastard alive, and tries to do a grapple. He barely wins, with 1 more success over the Hitman (who had to split his die pool, remember, so this is just sad). Hitman's out of actions this turn, but spends blood to heal.

Round 4 Andrei again spends blood for celerity, and attempts to pin the Hitman. They make opposed rolls, and the Hitman breaks free. Andrei then just punches him. 2 damage, but the Hitman soaks. Andrei has to keep rolling to resist Frenzy. The Hitman split his die pool to break free, but not resist the punch. He shoots at Andrei, and scores a mild hit. He also heals a level of damage.


And this is when I realize ANOTHER screw up, I think. I'd had both Andrei and the Hitman spend Willpower to ignore wound penalties. But, here's the thing, I couldn't find ANY reference to this in 1st Ed, either under Combat, Health, or Willpower. I don't think you CAN do it in 1st Ed.

Round 5 Andrei spends a blood point on Celerity and punches the Hitman. Applying Wound Penalties, this is to Andrei's advantage.  He manages to land 2 damage after soak. Second attack, more of the same, and manages to finally roll lucky. It helps that the Hitman completely fails his defense roll, and Andrei lands 5 levels of damage after soak. The Hitman is dead.

This was a mess of a fight. In fact, the whole process of running this game has gotten rather unwieldy. I have to make some changes. Unsurprisingly, this goes back to the idea of "run the game like you would any other." I need to whip up a GM screen with the key rules for 1st, at least until I really have it down. I need to stat up some NPC's, particularly various gang members, since they seem to be ongoing threats. I'm using both the Mythic GM Emulator and the Universal NPC Emulator, and it's just getting to be a bit much--I need to create my own cheat sheets to make them easier to work with. Part of this is my fault--I have the U.N.E. as a pdf, and keeping my laptop within easy reach further screws up the table.  So, I need to work on some logistical elements to this game.

Anyway, that's enough for this post. I actually went all the way through this adventure, which we'll pick up next time!