I wasn't able to play very much of the Solo vampire game I was so excited by. This past weekend was rather hectic, and I did manage to squeeze in an old school AD&D game as well as the beginning of a new Fireborn game. So, I can't complain too much.  Still, it was pretty fun, and I'm eager to try it again.

For this post, I'm going to break down what happened and the "minutes" of the rules and how they worked for clarity. Future posts most likely won't go into such extreme detail, instead only focusing on significant results. But, given that this is the first, and some people had questions as to how solo roleplaying works, I'm going to consider this as an "example of play." Also, those who are more experienced than I might be able to point where I went wrong and methods to improve my game.

Alright, let's get into it! Before the game can start, I need to do some housekeeping. Mythic uses various lists to keep track of major NPC's and well as major "plot threads" in game. Since the game hasn't started, you need to create an initial list based on the characters. These are NPC's that matter to your character, regardless of their roll in the game. Basically, whoever YOU find interesting. Fortunately, Vampire helps with this with their Background rules. Here's Andrei's NPC's:


Threads are ongoing plot lines, struggles, and "issues" that affect the character.  Andrei is, currently, a fairly reactive guy who is still dealing with this whole "being a vampire" thing. Here's the threads I come up with for him:
With all that out of the way, I roll a d10 to determine Andrei's current blood pool (as a member of the 11th Generation, he has a max pool of 12). I get a 9, so he's hungry, but not too bad. His herd is the tenants of the motel, and he normally waits until late at night when even they have gone to sleep to feed off of them. Since I decide to start the game early one evening (I arbitrarily decided on a Tuesday, in the Fall), it's going to be a while before he can feed.

Now, I need to determine what's going on. You're "supposed" to actually have some idea for what your character wants to accomplish and start the first scene at the logical beginning of that story, same as you would any game. But, I have no idea right now, so I use the random method. All rolls for Mythic are percentiles.

First, I roll for the "Event Focus" and get a 93--NPC positive. Since I have no NPC's for the "adventure list," I need to use one off of Andre's "character list." I have nine NPC's, so I roll a d10 (figuring a 10 would be a reroll), and get a 1, his sister. I wasn't planning on bringing in the "magic sister" thing quite yet, but...sure. I then roll for the "Event Meaning" on the "Action" and "Subject" Tables, and get "Move" and "Joy."

I decide Elena has moved into the Daybreak earlier that day, actually renting two adjoining rooms. Andrei rushes to her room (well, one of them), to find out what the hell she is doing there. The two have a cool relationship for siblings, and her being here is weird. Also, the Daybreak ain't the Four Seasons. He's worried about her, and rather freaked out that she would even come to his Motel, let alone check in!

In a normal table top RPG, this would be a dialogue driven role-playing scene. But, in a Solo game it goes a bit different. Mythic contains a "Fate Chart." You ask various question and assign them various degrees of likelihood, from "Has to be" to "Impossible" with "50/50" being the middle. There's also a "Chaos Rank" value and, as each scene ends, the Chaos Rank changes. So, at Chaos Rank 5, 50/50 has a 50% chance of succeeding. High Chaos means things are more likely to be "yes"--at Chaos 9, a "50/50" likelihood has a 95% chance of being "yes" while at Rank 1, it only has a 10%. It's a bit fiddly, and I'm still wrapping my head around it. But, here's what I did with it. The game starts at Chaos Rank 5.

So, Andrei has rushed to Elena's room, and she is crazy excited to see him and happier than he has seen her in years. They briefly catch up, trading obvious lies to each other about their lives, before Andrei asks what the hell she is doing there?

At this point, the scene is at an end. Andrei really wasn't in control in this scene; Elena held all the cards. I increase the Chaos Rank to 6. Andrei has agreed to introduce her to Nicolai, but has no idea how to get in touch with him. He goes to meet Irina, his sire, hoping she might know. I figure he has a pretty good idea on her routine, and so knows where she is most likely going to be that night--a fairly quite bar downtown. Before that scene begins, though, I need to roll against the Chaos Factor to see if the next scene is altered in some way--I get a "6", and so it is. In fact, it's an "Interrupt." I roll for a random event, and get "Remote Event," "Trust," "Liberty." I'm not sure what to make of this, so I determine that someone else is interested in what is going on, but is currently letting things play out. They have put a tail on Andrei though, to keep a tab on things, though. I have him roll Perception + Drive to spot it. He fails, and so continues on his merry way. I add "Elena," "The Tail," and "Hidden Players" to the list of NPC's for the adventure, and "Meet with Nicolai" to the adventure Thread list. 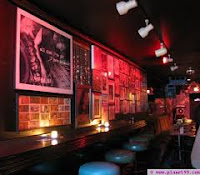 At the Underground Bar, he hopes to meet with Irina. She's his sire, and his and Elena's grandmother, so Andrei is going to be up front with her.


I decide that there's something going down, and soon. Her personal Masquerade is "mob moll," so she doesn't want to get directly involved herself, but Andrei's is "semi-connected ex-thug trying to go straight" so he can be a bit more blatant. She tells him to wait till a certain time, then leave by an employee exit. Kevin Jackson's Bloods are making a hit, and she wants Andrei to stop it.

He heads out after spending a blood point to boost his Dex by 1. He sees a group of 5 Bloods ready to attach an unaware member of the Russian Mob (with girlfriend and bodyguard in tow). I run this as a normal vampire battle. Andrei gets the drop on the Bloods, and activates his Celerity. I figure Celerity 1 doesn't risk the Masquerade (though higher levels certainly do!), and so this is pretty safe. He's able to charge in and take down one of the hitmen hard. The rest change their target to the new threat, and a barrage of bullets heads his way. He's pretty lucky, but still takes a couple of wounds. I figure there's a risk of Frenzy in this scene, and being a Brujah only makes things worse for Andrei. He rolls his Courage (remember, I'm using 1st Ed rules), and succeeds enough to not Frenzy. The second round he uses Celerity again, gets one hit in, and saves the other for dodging. The gangster (who I dub "Sergei" cause...why not?) and his bodyguard get involved. Two of the Bloods get wounded. Andrei is able to get enough successes to resist Frenzying for the scene. The Bloods actually win initiative on round 3, but unnerved by the sudden changes, they get the hell out of dodge.

Sergei is grateful, and of course offers to help Andrei to a doc to get patched up. Andrei burns a blood point to "bleed" believably, and succeeds on a  Charisma +  Subterfuge check, telling them it's a minor thing, and he has an EMT back at his motel who owes him one. They believe he'll be fine, but Sergei knows who Andrei is and is now in his debt.

The scene went decently well for Andrei.  He got a bit of a lead for his main goal, and has secured his ties to the mafiya--it's unlikely anyone will give him a hard time for being a bit late on his payments, and he might even have gotten another Ally out of this. I reduce the Chaos Factor by 1 back to 5. I update the Thread list with "mob war" and add Irina, Blood hitmen, and Sergei to the Character list.

But, Andrei is in a bad spot. He's down three health levels, and has spent 4 of his 9 blood points. He needs to feed, and to heal. Before heading off to meet with Gordon (most likely at Succubus, because everyone is at Succubus), I decide he needs to Hunt. Before resolving that, I roll against the Chaos Factor and get a 1--an Altered Scene.

Andre's night is going to keep getting interesting...