I was able to get a bit of playing in. Things did not go well for Yeoman. 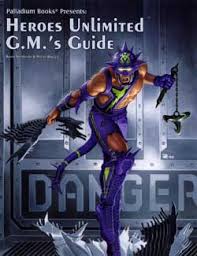 Unsure where to begin,  I rolled up a random crime from the Heroes Unlimited 2 G.M.'s Guide.  I got a group a group of two-bit thugs committing forgery in order to commit a crime, with a complication that the heroes couldn't get involved--like, it would expose their identity.

It began on a typical night on campus. Scott and his room mate Chris were heading off to one of the computer labs to get some Quake time in (remember, this is mid-90's). Entering the lab, they stumbled upon a group of older students making fake ID's. The older students first tell them to leave, then intimidate them out (they have guns).

Scott and Chris head to another lab, where Chris is able to hack into the system and see that they're making ID's that match various school administrators. Curiosity peaked, Scott decides to follow them and see what they're up to. He heads to the exit and hides, but a combination of an "Interrupt" and a bad Prowl roll leads to him heading out of the bushes just as a passing student vomits loudly, drawing the forgers attention. A few rolls on the Fate table, and Scott is being hurried away at gunpoint--these kids mean business.

Aware that his life is in danger, once they get to secluded spot, Scott strikes out at the criminals. A nasty and ugly brawl ensues, and Scott can't use Shillelagh, but he does eventually emerge the winner. Bloody, but victorious. While one of the forgers lies on his back, writhing in pain, Scott turns into Yeoman, and uses Shillelagh's magic to force the truth from the crook (Words of Truth).

Turns out, they were all in debt to local gangster. He offered to wipe their debts clean if they would boost several pieces of artwork that were on loan to the school. They didn't ask why, just took the offer as the best they could get.

Despite being wounded (down to just better than half S.D.C.), Yeoman decides to go check out this "Slim Jimmy" and find out what he can.

And this is where everything went wrong.

A few rolls on the villain tables. revealed that Jimmy is an average (if 3rd level) thug, with about 5 guys with him. Two of them are fairly bad ass Enforcers, the other three are just Thugs. But, they're all armed. The Enforcers with sub-machine guns, the Thugs with pistols. Yeoman climbs up to the roof of their auto-body shop, and attempts to listen in on their conversation (through a conveniently open sky light, as you do). A failed Prowl roll reveals him, and Fate indicates these guys HAVE dealt with vigilantes in the past, and so are itchy and nervous about caped figures lurking about. The Enforcer fires a burst at Yeoman The shots land, and drops him through the sky light (crit by the enforcer).

Initially, the fight is tolerable for Yeoman. I decide that the boss and one of his Enforcers are in a side office, so he "only" has to fight one Enforcer and the three Thugs. With Shillelagh, he now has access to both armor and the ability to summon a mystical Shield to help protect him.

It's not enough. He's able to take down the Enforcer and a Thug, but when the boss and the second Enforcer arrive, he's worn down and quickly and dropped to less than half of his hit points.

I ask the fates (i.e. Mythic GM Emulator) if these guys are going to take him captive, figuring it's a Sure Thing. A roll of 100 makes this an Exceptional No, and the career of Yeoman ends on a bloody shop floor.

So, what did we learn?

First off, Palladium works pretty well for Solo. The combat was fun and exciting to play through. Though, I had forgotten how quickly it can go from "I'm unstoppable" to "crap, I'm dead." Guns are nasty in this system.

I say "pretty well" because there's a lot up to the Game Master in Palladium. I'm generally a pretty fair/fudge on the side of the players GM, but I also need to be fair to the game and the NPC's. If I was running this for a player, Yeoman probably would have been able to escape--wounded and humbled, but alive. Since I was both,  I had to rely on chance, and Yeoman paid the price.

What next? Probably make a new character.  I could start over with Yeoman and his adventures in Crescent City, but that just feels like cheating. He had his brief career, but this is why most supers become villains. Heroism is dangerous work. Also, I think for a Solo game I need a "jack of all trades" type character. Yeoman was really putting a lot of faith in his Prowl skill of 50% (he had it as both a Professional skill through a Skill Program AND bonuses thanks to his Gymnastics and Acrobatics), and it wasn't enough. I need someone who can fight, yes, but also someone who can sneak, talk, and move when things go bad.
at March 30, 2016