A little while ago, I went through and compared the various editions of Vampire: The Masquerade. Unlike, say, D&D, Vampire has, at its core, relatively consistent throughout its versions. But, there are still a number of distinct differences. Some of these were unique to 1st Editions, others occurred as the game shifted from 2nd to Revised. V20, the fourth and (for now) final edition of Vampire is a bit of an odd beast.  Not really a proper game in its own right, or at least something too large and unwieldy to hand to a new player and say "make a character." It's more properly viewed as an encyclopedia and rules update. While mainly based on Revised, it also borrows a number of ideas from 1st--most notably how Celerity functions. 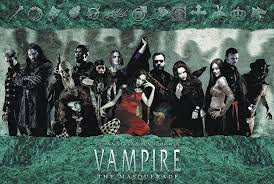 Which is my favorite? Honestly, I pick and choose from all the versions myself. I generally prefer 1st, but I do use the Thaumaturgy and Path rules from Revised/V20.

Which is the best? Well, that's for you to discover.


All editions are available through drivethrurpg.