In the middle of the 14th Century, the Long Night came to an end.

The Black Death struck Europe, and utterly depopulated it. Best guess is that 45-50% of the population died between 1346-1351, but this is an average. Some communities were spared, while others were completely wiped out. The mortals had absolutely no understanding of what was happening, or why. The undead had even less. 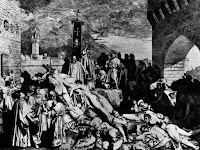 One night, everything was normal, and their eternal existence continued as before. The next, half their mortals were dead. They had pushed their own population to the breaking point, and could not respond to the catastrophe that was happening around them. Elders seized territory and surviving herd to support themselves and their favorites. Others were cast out to fend for themselves. Mortals began looking for scapegoats, and as the undead should have remembered from the Cultics, once mortals begin looking in the shadows, their time grows short. More childer were cast out to reduce the risk of exposure, and others were offered up to the enraged masses to end their hunt.  Once loyal childer were sacrificed for no cause, and others were disenfranchised and exiled. Bitterness, fear, and hunger seized their hearts.

Many fled to the largest cities, where they met others of their kind for the first time in their existence. Few spoke the same language, and fewer still knew what to make of the strangers. Some were able to adapt, but to many, the very existence of these other vampires violated their faith. Especially those seemed to take such pleasure in defying God. If one is on a Road, then those following a different Road are not just "different"--they are heretics who dare to rebel against Heaven's Plan and must be destroyed. Not merely for their own sake, but for the sake of anyone they might corrupt with their foul beliefs. It is a mercy to kill such a creature. 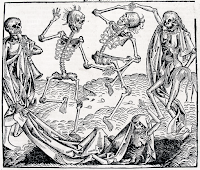 Of course, they also came to blows with the natives for more base reasons. The cities these hungry vampires fled to had suffered the plague as well, and they could barely feed themselves, let alone the hungry rabble. They were refused, and hunted. But hunger makes one desperate, and so war came to the vampires, as roving bands of fanatical childer roamed the lands. These were the original Anarchs, and they fought under a banner of "every Kindred an Elder!" No longer would they suffer and die at the whim of another; they would be their own masters.

The chaos and fighting lasted for decades, until the mortals struck back. The Inquisition and hundreds of local hunters took the fight to those who claimed to rule the night. As with Rome and Persia before, those that didn't fall to fangs fell to fire. Vampires are, as a group, loathe to change, but those that fail too cease to be.

A compromise eventually came about. Well, two compromises, really. The old way of the Elders was finished. No longer could one claim absolute and total obedience of ones get for all of eternity. But the Anarchs call of "every Kindred an Elder" bred even more hungry neonates, more desperate fanatics, and more violence and chaos. The Tyrants proved a way to bring peace among the undead.

In the urban cores, there arose who used their guile and wit to protect and preserve their kind, and these were soon supported by the mass of vampires, eventually supplanting the Elders and being proclaimed as Prince. Out in the barrens between cities, others rose through violence and bloodshed, and were leading their brethren in daring and successful raids, and were dubbed Ductus, or leader. Both the Prince and the Ductus represented a change, and new way for vampires to exist. Both relied on support from the other vampires for their authority, and both accepted certain limitations. The Prince, for example, could not summarily execute a disobedient vampire, but instead had to prove their had violated a Law, and make their call for death public. Nor could they hold a Kindred in thrall for eternity--once they were presented, they had full rights (no mere privileges) to live as they pleased, within certain constraints. Both retained the power to restrict breeding and hunting for the good of all. 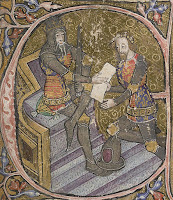 Conflict, of course, soon intensified between the two groups. The Princes began organizing as the Camarilla, initially as a counter to the mortal Inquisition and to force all vampires to disappear with the herd. Few of the Ducti or their followers could accept such a retreat, for many still clung to their faith which taught that they had a special, elevated role to play in the salvation of the world. Eventually, some particularly charismatic leaders rose to bend these divergent Roads into multiple Paths, all leading to the same Truth. But, that is even further in the future.

So, this is a rough overview of my idea for the Long Night. I haven't touched on some things, such as the Tremere or the Assamites or the Ravnos, but it's an outline. More than anything else, though, I want to run a game as small scale and localized as possible. I don't want the Caine myth or Lilith to be even remotely a part of the story.  I want the rulers of the Middle Ages to be the Elders, with the Princes being a compromised solutions, something new in the world of the Kindred that helps bring them into the modern age. And just as the Elders failed at the coming of disease and Inquisition, the Princes fail in a world of cell phone cameras and instant communication?

I'm not sure how I would run a Chronicle in this setting. A lot would be up to the characters, as I like the setting to, as much as possible, reflect the PC's. I imagine the first Chronicle would be a "conventional" one, if one with long time jumps between stories. A Chronicle doesn't have to go one for years. In fact, I'd argue against it. 3-7 stories, maybe 5-14 sessions feels about right. Focus on the immediate conflict and themes and tell the story until that conflict comes to an end, regardless of the characters success or failure. If everyone is still having fun, then tell a sequel Chronicle dealing with the fallout from the first, but exploring different conflict and themes. In my dream, it would emerge over time as a Chronicle of Ages, telling the story of these characters from their creation in, say 1,000, all the way to the modern nights. But, unlike most other millennial Chronicles, I don't want them hopping all over the world. I want them to spend the first four hundred years in one city. Then, MAYBE the leave during the Black Death or the Inquisition, depending on how things go. Perhaps they wander for a few decades, before eventually settling down in another city, or even back home. And then they say there, perhaps the rest of the game, or maybe they go to the New World. A particularly mobile coterie might have three different homes over a thousand years, but most will only have one.

I want them to see and feel the weight of the centuries, and the best way is through their home. From a small collection of villages huddled against a castle to a massive, sprawling industrial wasteland, to a gleaming city of glass and chrome, through war diseases, revolution and oppression, I want them to see how the scars of the past define and limit the future.
at April 14, 2016