There's something about the published historical setting for Vampire that doesn't sit right with me. It's been bothering me for a while, but it really came home to me when I was working on my Transylvania Chronicles series. The Dark Ages, as presented, just didn't work the way I wanted them too.

Part of this is comparing what  I thought the Dark Ages were like to what Dark Ages ultimately presented itself as. I've been a fan of Vampire for a very long time, and when I read the few brief snippets of information presented to me, an image of the world formed itself. An isolated, benighted existence, defined by a claustrophobic entrapment in the few placed that the undead could feel safe, and lorded over by tyrannical elders whose sovereignty went unquestioned.  A world that would terrify even  the most tyrannical Camarilla Prince or violent Sabbat Ductus.

I do understand why the altered this. Above all else, a game needs to be playable and fun. And a community of three kindred huddled beneath the ruins of Rome and lorded over by some two-bit tyrant might work for a one-shot, but is hardly the stuff of epic Chronicles. So, the Dark Ages became something of "the modern day, but with swords." Travel was relatively easy, most domains had a variety of Clans interacting with each other, almost every character was as or better informed than the typical player, etc. Princes rules above all, and the stories and adventures were similar to the modern nights. The only real difference was that the Lasombra could hang out with the Ventrue and the Tremere, and the easy availability of Paths meant that the pesky "no murdering your way out of a problem" wasn't an issue. 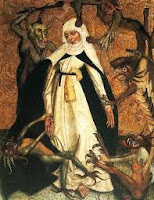 And don't get me wrong, I enjoyed the heck out of Dark Ages. I was fortunate enough to play in two exciting and awesome Chronicles, and ran one--not counting my aborted attempt to run Transylvania Chronicles.  But, I still think those idle thoughts of tyranny, ignorance, fear, and damnation. A world so miserable that violent revolution is the only path to knowledge, freedom, and hope. A world of eternal and unrelenting darkness.

So, like any good gamer, I'm going to homebrew that nonsense! This isn't like my take on the Transylvania Chronicles, were I plan to wrestle with the text. This is meant to be a tweak, more than anything else. I'll use most of what is in the books, dump what I dislike and modify the rest. Also, I want the "end point" for my Long Night to be still be the Masquerade. So, still an Anarch Revolt, still a Camarilla, and still a Sabbat. But it is what the world was like before the Anarch Revolt that I want to tinker with. Of course, I have no doubt my players will end up altering everything, but, hey, that's part of the fun.

This will most likely take place in three parts.

I The Fall of Night -- how Kindred are organized during the Long Night, and how it came to be.
II Undying, Unchanging -- what this means for a typical vampire, particularly a neonate.
III Memento Mori -- the Black Death, and the end of an age.

If anyone has every run anything similar, I'd love to hear about what you did, what worked, and any advice you might have.
at April 11, 2016