So, what does a world of darkness and stasis, ruled over for eternity by self-proclaimed Elders, actually mean in a game? Well, it means Ignorance, Monotony, and Obedience. Unlike a modern game, where the "truth" of Kindred existence is more or less understood, and a certain degree of toleration and independence is expected, the Long Night character is a prisoner. Not just of the Beast, and not just of geography (though travel is so perilous that few ever leave their home, and even fewer ever return), but of their own perspective and world view. It is this prison, and the tension it generates, that is the heart of a Long Night game. 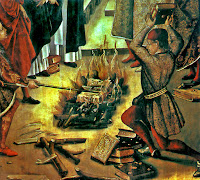 First up is Ignorance. A neonate in the Long Night knows nothing. They know only what their sires deign to tell them. And since they only know what their sires told them, their knowledge is, at best, limited. Even if they choose to be honest with their childe, the knowledge they impart is most likely completely and laughably wrong. A childe doesn't know about Clans. They know they are vampires, and and vampire behaves like they do, except for the few outcasts and cursed ones they might have met once. Maybe. They know nothing of Generation. Far as they know, the Elder is Lazarus, the First Vampire.  Sure, he's got blonde hair, blue eyes, and speaks with a Danish accent, but who are they to question? Would such a discrepancy even be apparent to the childe? Most likely not. So, the Elder is the 1st Generation, their Sire is 2nd Generation, and they are 3rd Generation. They know nothing of other cities, or that other kindred exist. They don't about the fall of Saulot or the rise of the Tremere. They certainly don't know about diablerie, or how the Blood Bond actually works.

Anything they know can only come from their elders, or be learned from hard earned experience. There's no books detailing this knowledge, no kindly elder anarchs will to share information, and not even other Clans they can bargain with. In the modern day, a sire will most likely fill in their childe with as much information as they can, to better arm them for the struggle to come. In the Long Night, the childes ignorance is key to keeping them in line, and there is no benefit to telling them more than they need to know. 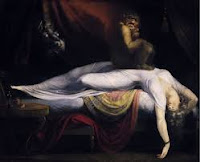 There's also the endless Monotony. Human life and history may change, but for the undead every night is the same as any other. The same people populate your world, and have the same conversations and the same conflicts.  Rarely is there a "new player" in town, Which raises the question, just what kind of Chronicle would this be?

Well, the most obvious would be a Lords of the City Chronicle, with a bit Agents of the Prince...er, Elder. The players most likely have their own corner of the land, and need to develop and protect it. The same threats in a "normal" game still apply--mortal violence and  criminals, other supernaturals (Lupines in particular) need to be dealt with, Hunters are still a concern, of course. And you're inevitable going to step on the toes of your "family."

While there are only a few vampires in the Long Night city, their relationships are still an issue. In fact, the tangled emotions and tensions between this brood will most likely be the backbone of any such Chronicle. Generally, no one is trying to kill each other. At worst, they'll torpor you and hope you learn your lesson. Everyone is loyal to the Elder, and jockeying for his favor is a major element of the game. Just uncovering what you need to do to please him could be a challenge in and of itself. The Elder is effectively the Prince, Primogen, Harpy, Scourge, and Keeper of Elysium all rolled into one.  The big difference is the scope of time in such a game. Unlike a "night by night" game where there is constant action and intrigue, the Long Night unfolds gradually, over centuries. Decades may pass between sessions, as all involved settle into their routine.

Of course, there's a second kind of monotony when everyone is related. The primary way to run this would be as a Single Clan game. Almost all the characters (both PC and NPC) are the same Clan, and other than a few stragglers, that's all the players ever know. This can work, especially for when the times change and they need to deal with other disciplines and other flaws. But, its possible players won't be content with this setup. Players like having their niches, and while a Single Clan can work fine for a single player, or even two, it might not be as satisfying for three or more.

So, the alternative is get rid of Clans entirely. Or, at least, the Clans as we understand them.  Instead, it's all about bloodline. The way it could work is that any given vampire could sire one of a different "Clan," so long as they have at least one Discipline in common. So, if the Elder is a Ventrue, he can sire three childer--Brujah (Presence), Gangrel (Fortitude), and Malkavian (Dominate/Dementia, depending on concept). Those Childer could then produce, respectively, Toreador (Celerity), Nosferatu (Animialism) or Lasombra (Dominate).  By such methods, almost any Clan can be generated.
I rather like the alternative idea. It allows for variety while still keeping the claustrophobic family theme. It also explains why the later Camarilla doesn't believe in the Antediluvians, or Gehenna. While bloodline and heritage is key, the Clan idea is a more modern invention. If anything, it's due to the over breeding so prevalent in the modern nights. It takes strong blood to allow a mortal to truly be themselves after death, and this new generation wastes their power by embracing too quickly, and too often. Where once it would take centuries before one could embrace, now neonates are embracing, and their childer are embracing, and the blood grows thinner every year.

In addition, there would be a sameness of ideology. After all, if all you know is what your are told, how could you ever come up with your own world view?  As such, in those cities where a Road exists, it will most likely be utterly dominant. Even those who do not fully subscribe to its view would still embrace it as a code of ethics and behavior. Those that reject these beliefs are treated as lunatics at best, deranged heretics to be killed at worst. Gamewise, I would let the players pick the Road they want, if any. Everyone would be on that particular Road or on Humanity. Religious pluralism is for a different time, and "toleration" of opposing views is an alien concept. This is an age of conformity.

Finally, this is not the modern day. Obedience and service are virtues, not insults. Everyone, from the lowliest serf to the most powerful King serves someone else, and it is your responsibility to obey, not to question. It does not matter if your lord is "good" or "right" for it is the will of God that places him above you, and to defy your master is to defy the dictates of God himself.  If there is a Road, it is Gods plan that vampires follow that Road; after all, even a Road such as Sin tells the Vampire what his obligations are in the grand Divine Plan.

As such, the players are inherently disposable. They will be the ones sent to deal with the Werewolves, or the hunters, or any other threat. They will receive the worst territory, and still be expected to support themselves as well as provide appropriate gifts and tribute to their betters. And when, after decades of work, the turn the collection of tanning hovels into a vibrant community and have risked their unlives a dozen times, they still have no claim on anything. When the Elder embraces some new Childe, and that Childe demands their territory or their service, they are to give it, and gladly. They are, after all, of the 3rd Generation, and she is of the 2nd. 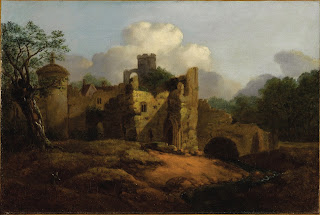 And so that is their lot in life--service and obedience to God and the Elder, toil and tribute for their betters, and stalking the mortals whose blood they so crave. It might sound like hell to us moderns, but to the Kindred of the Long Night, they could not conceive of a different world. In fact, and in many ways, most are quite content. Blood is relatively easy to come by, there are few dangers that would put their immortality at risk, and as the mortal population grows, and there is more and more blood, the Elder is ever willing to grant permission for new embraces. Gradually, a 3rd could become the sire of a 4th, and some even give rise to the 5th. While the Dark Ages books put the vampire to mortal population at a ratio of 1:1000, in the Long Night they are less cautious. By the end of this era, the average ratio 1:800 or even 1:500. In some communities, it even approaches 1:100. But so long as the mortal population continues to increase, there is nothing for the undead to fear.

But the time is coming soon when the undead would learn what true fear really was, and then the whole world would tremble.
at April 13, 2016