So, I'm still working on the setting for my new Chronicle, and I wanted to do a quick digression on how I create NPCs, particularly for Vampire. The published sources tend to go into great detail with their tragic and horrible mortal lives, and what has made them the monsters they are today. Well, that's all well and good, but doesn't terribly help me with them in the game. So, when I create my own, I tend to focus on the now of the character, what are they up to tonight, and how are they hoping to accomplish it. Then, I work out anything else I need from there, with particular attention to their feeding habits.

Yeah, I've been accused of making my vamps be "blood addicts." Maybe, but I've also assumed that hunting and feeding are what vampires enjoy; it's not a burden for them. Anyway, I've ranted about this before, so I won't go into it again.

For my current setting, things are a bit different from how I normally setup my NPCs. There's no such thing as a "Personal Masquerade," for one. We are still in the Long Night, and while there is a Tradition for "Silence of the Blood," it is far different from what the Masquerade will be. Secondly, pretty much everyone in this setting is Nosferatu, which means they can both vanish and appear as a dozen different people as needed.

So, the Masquerade isn't a factor. But something else dominates the world--Arawn. He is a religious fanatic with a very warped view of Christianity, and a vampires role in the world. He believes their job is to tempt, harry, and punish mortals in a bid to save their souls. Those that fail are slain, often in a horrific manner, with the justification that their painful deaths might purge their souls of sin.

There are two results to this. First, only Arawn can authorize the death of a mortal. More importantly, only Arawn can allow a Kindred to feed on a mortal--otherwise, they are forced to rely on animals. This is fine for a young vampire like Gauvain; unsatisfying, perhaps, but possible. This is untenable, however, for an elder vampire, such as Mabon. As one ages, animal blood becomes less and less satisfying, and so they scheme and manipulate ever more, hoping to convince their Elder to allow them to drink the vitae they so crave.

Tied to that, is status. This isn't the modern nights, with multiple Primogen and Sects and Coteries feuding over territory and Elysium's and all that. This is the Long Night, and that means the Eldest, Arawn, is the center of the entire social world. If one wants status, or approval, or to shut down a rival, only Arawns approval can grant you such gifts. And so not only is the Beasts desire to feed driven to a warped interaction with mortals, but so is the Mans desire for belonging. Which means, each NPC has some warped and messed up desire to "corrupt" or "harry" man, no matter what cost this inflicts on their souls.

Anyway, here's an example of a sheet I worked up for each major NPC. 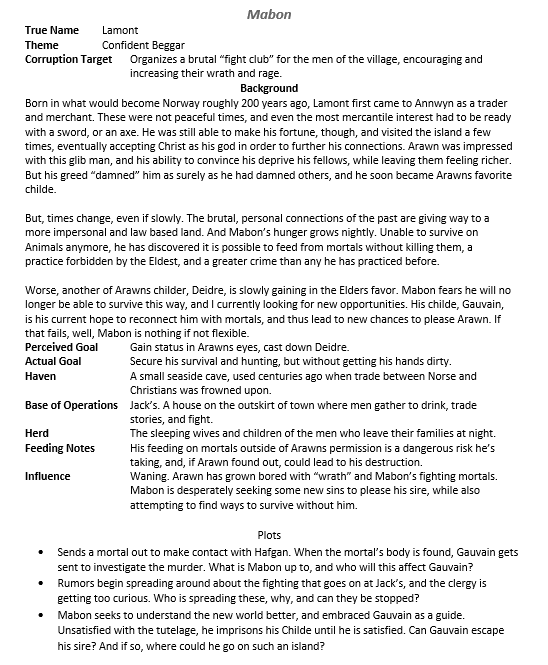