Island of the Dead -- New Character

I've worked out the basic setting and ideas for my new Solo Vampire Chronicle. I talked more about it here, but in short it's going to be a geographically isolated locale, ruled by a manipulative and controlling religious fanatic. Now, I need to come up with who my main character is going to be for this world.

I don't have a lot of ideas for the character yet. I know I want to play a Nosferatu. I know I want him to be a male, and of European/Christian descent. I also know I want him to "special" in some way, either a great warrior, or thief, or scholar or...something. He's cut from a different cloth, which is why he, unlike others of his generation, is given all the crappy assignments that make role playing such fun. 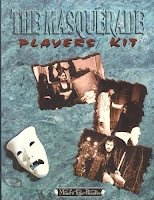 I actually rather enjoy not knowing what I'm going to get, and a solid "random character generator" can be a delight, particularly when you don't have a really solid concept in mind. So, given that, I grab my copy of the Masquerade Players Kit. I've used this before, and was pretty happy with the results. Of course, this generator is designed for "modern" characters, and so I'll need to be a little creative with the results to fit the Dark Ages setting for this game. Anyway, let's see what we get! 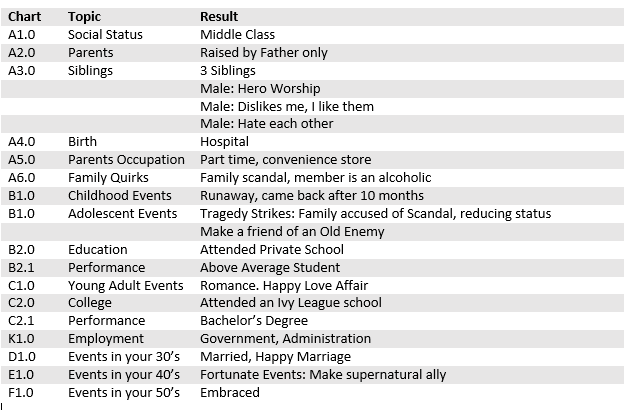 Now, obviously, not all of this fits my medieval world, but it does give me an idea for a character. First off, I need a name. I'm already shamelessly ripping off Celtic legends and lore, so let's keep going with that theme. The character's name will be Gauvain, a variation on my favorite of Arthur's knights.

Ok, so, Gauvain's father, Cilydd, was a well regarded craftsmen. However, when his wife passed away and let him to care for his three sons, he began to slowly deteriorate, losing himself in drink and eventually being reduced to a nothing more than a hired field hand. Now, given the amount of alcohol medieval folks routinely imbibed...well, that's saying something.

Gauvain has a complicated relationship with his brothers. The eldest, Cai, took on the role of caretaker, and basically raised the other boys and worked whatever odd jobs he could to keep food on the table. His other brothers, Bedwyr and Gahreth, were more competitors to Gauvain than companions.

Still, he was a bright and diligent boy, and Cai was able to arrange for him to be taken in by nearby monks and receive an education. He thrived in the cloistered environment, but he fell in love with the beautiful Anna and left the monastery, eventually finding a certain contentment as a clerk for Lord Peter. Or, most likely, Lord Peter's father.

Not sure about his Supernatural Ally.  It could be his sire, but I want something odder. A Fae could work, and fit the naming conventions. A Ghost is always fun too. I'm putting that aside for now--I need a bit more time to think on this part.

Finally, as an old man, he is embraced. So, who is his sire? I have absolutely no idea. I was rather hoping the tables would inspire me, but I have nothing. Well, time for MORE random rolls! Let's bust out my copy of the Universal NPC Emulator!

First thing I do is roll percentile to determine gender--my sire is male. Next, I need to know their basic personality, and the UNE gives me a result of:

Well, that fits a Nosferatu, but a tad odd. Ah well, let's see what else we get before throwing any result away. The next step is to roll for three sets of "goals" or things the NPC cares about. Here's what I get:

Hmm, things area becoming a bit clearer now. He's not a "Confident Beggar." He's a con artist. And he's patient, very patient, and a schemer. He's cunning and manipulative, but he's not smart or educated. He sees the growing influence a man like Gauvain has, and doesn't understand it, but wants to. He embraced not only for Gauvain's already existing mortal ties and knowledge, but also as a teacher. He wants to know for himself this knowledge that Gauvain possess, as well as a liason to the changes that are occuring in mortal society. I decide to call the sire Mabon, after an evil wizard in Arthurian lore, and decide he has some big plans, plans that Gauvain doesn't even begin to suspect, let alone comprehend.

Now, in my first post, I made a point about how Arawn only allows "redeemable sinners" to be embraced, so I need to know what sin Gauvain committed.  I have no idea, so I roll a d7 and get "Greed." Gauvain loved his wife and the family they created, and used his position at court to manipulate things to secure his children's positions. In fact, I'll say he had 3 children, Florence, Lovell, and Gingalain.  Florence was married to a prosperous merchant in exchange for certain legal decisions going the merchants way, Lovell gained a significant position in the Church, despite being a sinner and ignorant of the Bible, and Gingalain...well, Gingalain kind of ended up the best. He and his father we the most similar, and therefore got along the least. Gauvain managed to attach him as a squire to a Knight.  No one thought he would rise any higher, for he had no noble blood or training. But like his father, Gingalain rose above his station through hard work and passion, and was eventually knighted on the battle field. He has no land, and still seeks his fortune through war, pillage, and mercenary work.

I think that's enough of an update for now. I'm going to work on Gauvain and some other NPC's for the setting, then I should be ready to actually play!