Night 6 Stealing from the Thieves

As the 6th night begins, the Chaos Factor is set to 6. No random event (Roll 7), and no planned encounter with local vampires (1-10 chance, rolled an 8.)

Daron, Maya, and Trent awaken in their makeshift basement haven, having safely survived another day. They’re all mildly hungry, but after feeding heavily on cattle the previous night, the hunger isn’t overwhelming. They all decide to wait until later that night, particularly since they’ve found a safer way to feed. Instead, they discuss what they want to do now. They are following two major plans.  The first is the investigation into Prestor, his origins, and his mysterious visitor. The second is Maya’s still vague idea to rob the dealers. Given that, what does each character want to do?

A strange madness seems to come over the characters, and they are all too eager to go after the dealers, tonight. Now. Perhaps it’s the realization that they need they have a need for the cash, that their resources are not up to their needs. Perhaps it’s their latent predatory nature. Perhaps they just feel the need to DO something after the relative peace and inaction of the past few days. Or, perhaps they’re just bored.

It doesn’t really matter, they’re eager for action, and choose to hit them earlier, rather than later. Yes, they know it’ll be more difficult earlier, but they’re feeling down right cocky, and they figure there’s more cash earlier in the evening. They need the money, and they’re ready to bust loose. They’ve been cooped up to long, and a lust for violence overcomes them.

NOTE: I really figured Maya’s plan would be a multi-night thing, as they slowly figure out where the money is going and the best place to hit it. But, nope, they’re going after it.

They don’t have weapons, and have neither the time nor the cash to get any. So, what’s the coterie’s plan? Overthrow Joy. Daron and Trent will disguise themselves as buyers, while Maya sneaks into position, as close as she can to the stash. Daron and Trent will cause a commotion to draw attention, and Maya will grab the cash.

How much does Maya know of the crew? I have her roll Int + Streetwise, and she gets no successes.  She’s not actually sure how many there were, or how each filled which roll—unfortunately, she didn’t have the best vantage point. No matter, they’ll just need to improvise.

They leave their haven, successfully avoiding the notice of their neighbors. They decide to drive together, and all pile into the Ford. They drive near the dealers, allowing Maya to hop out of the car and creep into position, then drive a few blocks away and park. They give her about 10 minutes before they’ll show up to make the “deal.” 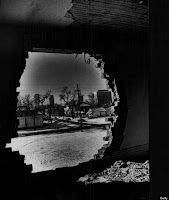 With Maya moving into position, I roll Mythic, and get “Altered Scene: NPC Action (Bothwell) Extravagance Masses.”  As Maya sneaks up, she’s surprised to see a white man talking with crew, seeming to give them orders. Does she recognize him from Trent’s Description? 50/50. No. How well does she hide? With Bothwell present, the difficulty goes back up to 8 for her Wits + Stealth roll, and she gets 2 Successes. Can she overhear what Bothwell is saying? She’s deliberately hanging to the flank, hoping to avoid attention. Perception + Alertness, dif 8. 1 success. She hears…something about “keeping your eyes open” or the like. But she’s not sure what that means. She hides, and waits for the boys, who should be walking up soon.

Is Bothwell gone by then? Likely. Yes. Maya is hidden, Daron and Trent walk up, trying to blend in. Cha + Streetwise rolls, and both Succeed. They seem like normal buyers, even if clearly not from the neighborhood. The “negotiator” walks up to them, bragging about their product. Does he recognize them? He just heard their description, but the odds of them walking up 10 mins later is so bizarre, he might not notice. 50/50 Yes, he does.

He tenses. Daron and Trent sense something is off, but they don’t know what, or why.  Stick to the plan? 50/50, No. They attack immediately, figuring the plan is blown anyway.

This is the first “real” combat of the game, so I’m going to go round by round.  The core book doesn’t include a generic “gang member” stats, so I base them on a Police Officer (Physical Stats of 3, all others at 2), but drop their Firearms to only 2.  I’m not sure how many there are in this crew, so I roll a d10 and get 6. There’s probably a few others, mainly look outs, who won’t get involved in any direct confrontation.

Both Daron and Trent roll Wit’s + Brawl to attempt a “surprise” hit on the “negotiator,” who is somewhat shocked to even see these guys here. They fail.

Round 1.  In 1st Ed Vampire, combat is handled a bit differently than in later versions. Each attack is handled with opposed Dexterity + Brawl (or melee) rolls, with only the character with the most successes actually dealing damage. Damage and Soaking also have variable difficulties, but I won’t bother going that deep. However, only Vampires can soak in this system. I’d probably allow mortals to soak vs. mortals, but will keep this rule for Vampire on Mortal battles.

Daron and Trent will attack the negotiator (now dubbed G1), while G1 focuses on Daron. Both G1 and Daron get 4 successes. They tie, so neither deals noticeable damage. Trent lands a weak blow, to no noticeable effect.

The rest of the gang see the commotion, but are initially more amused than alarmed.

Round 2.  Daron and Trent both spend 1 BB each, increasing their Strength, and spend a Willpower point to accomplish this. G1 still focuses on Daron and succeeds, but Daron Soaks the damage. Trent successfully hits for 4 damage.

Seeing the turn of the fight, the rest of the gang moves in, intending to beat the ever-living shit out of the characters.

As they move, Maya leaps from the shadow to attack one. She succeeds, and thanks to her Potence, she deals 7 damage—he’s out, broken and bleeding. He’ll need to get to an ER, but he should live. Do the others notice? No. 4 members left, not counting the Negotiatior/G1.

Round 3. Everyone is involved. Daron and Maya spend 1 Blood Point each to increase their Dexterity (and spend the necessary Willpower), while Trent spends 1 to activate his Celerity (no Willpower needed). The 4 new combatants divide up—1 (G2) goes to help G1 take on Daron. The other three focus on Trent. Maya moves up behind this group.

Daron ignores the wounded G1, and focuses on the new threat. G2 and Daron each get 3 successes, while G1 lands a lucky blow, which Daron Soaks.

Maya picks G3, who is both unaware of her and out of dice. She hits, deals 7 damage, and he crumbles to the ground, a moaning pile of broken bones and torn, bleeding skin.

Round 4. Trent again spends blood on Celerity, Daron and Maya again increase their Dexterity value.
G2 and G1 keep up on Daron, and he’s finally able to land a solid blow on G2, for 5 damage. Trent easily handles G3 and G4, and is able to deal 6 damage to G3, whom Maya quickly finishes off.

Round 5 Things are bad for the crew. This has gone from a “kick those punks’ asses” to a real, dangerous fight.  Do they draw their guns? Likely—yes. They draw, deciding to end this shit, now.

G1, G2, and G4 all draw their light automatics (9mm), back up, and begin firing at the coterie. I decide to make them but need to “split” their die pools, figuring the “draw and back up from the fight” takes half their dice for the round.

Trent spends 1 Blood Point on Celerity, the others do not spend Blood this round.

G4 fires at Maya, who dodges out the way.  G4 gets no successes, and the shot goes wild.

G1 aims at Daron, but misses. G2 aims at Trent (who attempts to dodge, but fails), hits and deals 1
damage after Soak.  With his two remaining actions, Trent is able to hit and drop the G1 and G2.

Only one member (G4) of the crew is left, holding his gun. Daron looks at him—“Drop it.” He does, then runs for his life.  Trent and Daron pick up the weapons, and hold the broken and bleeding gang members at gunpoint while Maya grabs the cash. Once secure, she approaches the crew and asks “who was talking to you earlier?”  They refuse to say anything, so Daron sticks his gun in the face of the most lucid seeming one and attempts to intimidated him Manipulation + Intimidate, dif 6. 2 Successes.

“Bothwell,” he spits. “Said to keep an eye out for you fucks. What the shit, man?!?” They all look at each other.  Fuck, this ain’t good. Rolling Perception + Alertness, Trent hears running in the distance, gradually getting louder. “We need to go, there’s more coming.”

The coterie run away from the scene. The chaos of the scene seems to imply that something might happen, so I roll Mythic. With a result of 10, nothing unexpected happens. But, are they pursued? Unlikely, with a result of YES.  Other members of the gang or at least people “friendly” to the gang are coming after them.  I have each side roll Opposed Manipulation + Firearms rolls—neither is going for a “kill shot” as much as trying to pin the other side down. I use Trent's pool—no PC has the firearms skill, and with his Dexterity he has the best chance.  He will also spend a Willpower point to guarantee at least 1 success. Players get 2 net vs 1 success. There’s a running gun fight, but the players are able to get to the Ford and speed off.

After all the shooting, I decide each gun only has half its normal number of rounds left. (27 total rounds left, if it comes up)

How much cash did they get? I first roll Mythic, and get Separate Rumor. That doesn’t help me or inspire me, so I toss the result and reframe the question as an “odds” one. Did they get a lot? 50/50 Yes. I assume it’s equal to a “liquidated” value for Resources of 1--$1,000.

A helluva of a lot of blood and carnage for such a sum.

The coterie drive for a bit, making Perception + Drive rolls to make sure they’re not being followed.  Once they feel they’re in the clear, the tension seems to lift from the car.  It was bloody, it was rough, but they succeeded, laughing and congratulating each other, proud of themselves, and their abilities. But, they are also very hungry, and need to feed. They peel off into the country, looking for some fresh, easy blood.

Suddenly, the car is bathed in flashing blue and red lights, and the coterie looks back in fear. 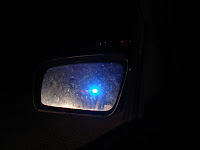