Hanson had run into another deadend trying to get help from Samuel, and has left the park frustrated and annoyed. Rolling for the next scene, I got the following prompt:

Be waylaid by a hostile Actor with a Clue. Face a Fight instead of a check. 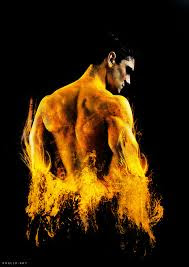 Normally, I would use various tools to randomly determine this Actor, but this time I don’t. Almost immediately, an image came to my head of a big, tough guy, covered in burning tattoos, consumed by an unquenchable fire.  I decide his combat prowess is typical for the Story (Physical Threat 2, or 7), and that he is going to try and ambush Hanson. But, to keep things interesting, I decide that his tattoos mean that his attacks are going to be aggravated. Which means that Hanson both will not be able to soak the damage for this combat, but also that they will be particularly hard to heal. It also means that she could face final death in this fight.

Hanson has succeeded on her Investigation scene, and now has a useful clue—the photographs of the tattoo’s. She gains one Victory Point and a Clue. The “Investigation & Action” scene counter increases, and her Opponents gets to roll to see if they gain a Victory Point. They roll and get an 8. As this is above the current count, they fail to gain one.

She also got involved in a brutal fight out in public with a man who had burning tattoos. If any saw her, this could increase the Heat. As I’m not sure, I give 50/50 odds.

Ok, someone saw, a mortal, and someone to be taken seriously. We’ll say a cop who was on an unrelated stake out. He would have stepped in to help her, but seeing the fight and the corpse burn up was a bit much for him. The Heat increases by 2.

With the scene resolved, it’s time to see where Hanson goes next. My initial thought was to take a step away from the Scarlet system and have her do some proper research in a library. But, I still want to see how all of this works.  So, instead I roll for an Action scene, and receive this prompt:

Convince an Actor ally of the foe to betray them. On a failure, face a Fight.

This might a bit tricky to pull off. I’m still not sure WHO the Opponent is, so picking an ally of theirs is a bit odd. I decide that whomever Hanson goes to visit about the tattoo’s will be a secret ally of the Opponent, and that, regardless of success or failure, she will figure out who the Opponent is. But that’s for the next scene.


Note: this game will be going on a temporary hiatus, as I begin a new one for Solo Gaming Appreciation Month in honor of +Zach Best
at October 31, 2017