Following the last scene, Metal Angel is flying across Eagle Harbor. A new hero, Scarlett Wing, is taking her first flight, and one of the men who almost killed him is watching her. And he’s dressed as a cop!
For this scene, the prompt is The Empress. 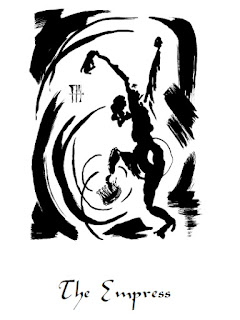 A matriarchal goddess, a beautiful earthy woman - experience of being part of nature and rooted in natural life, the appreciation of the senses and the simple pleasures of daily existence. Without this Great Mother within us, we can bring nothing to fruition, here is patience and gentleness to wait until the time is ripe for action. She governs the orderly rules of the seasons and the laws of the cosmic, she gives birth of new life, is initiative and has an eye for details. She is a caring and protecting wife and virgin, accepting the responsibility of own feelings, she has strength which nourishes and sustains. There is sweetness, passionate love and a playful erotic invitation to dance.

The first fight of the game, and both characters are holding back. Metal Angel has no desire to harm Scarlet Wing, and so will pull his punches if she gets too hurt. Scarlet Wing just needs to hold Metal Angel off. I’ll say it’ll take 3 rounds for her lover to escape, and she will leave soon thereafter. Metal Angel will need to overcome her by that time, or else he will lose his prey.

Wow, this game is already getting darker than I had wanted. But, Heroes Unlimited is a pretty brutal system, all things considered. I need to know what Metal Angel does next, and so I turn back to the Loom of Fate. I assume he’s going to try and take her somewhere safe, and find out what he can.

Well figure out what happens next with the prompt of The Emperor.