After the last session, Metal Angel has brought the wounded Scarlet Wing home, and is surprised by a mysterious voice. Who is the voice and what do they want? To find out, I turn to the prompt. The next one is The Emperor. 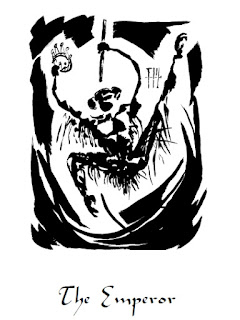 Father who embodies our spiritual ideals, our ethical codes, a god of inspiration and sudden creative vision, a revelation of the truth. Self-sufficiency, authority and ambition which drives us to achieve and the discipline and foresight necessary to accomplish our goals. The father within us also fosters self-respect, because it is this part of us which can take a standpoint from which to meet life's challenges. Responsibility as power, his strength can create and build. Pioneer, adventurer, urge for action, self-confidence and recognition, executive power, success, optimism, fulfillment of wishes.

A good number of previous prompts from Loom of Fate (CRGE) indicated a plot thread was coming to a close. I decide that in this scene Metal Angel will start getting those answers, and then moving forward. I decide, based solely on the description of the Emperor, that the mysterious voice is an old, semi-retired hero who had been working with Scarlet Wing.


Why indeed? Now I turn back to the Loom of Fate and try to figure out what is going on, and where it might lead.

Metal Angel now picks up Scarlet Wings quest to stop the robbers from using their weapons to turn themselves into supervillains.
The next prompt is The Tower. Here’s the description: 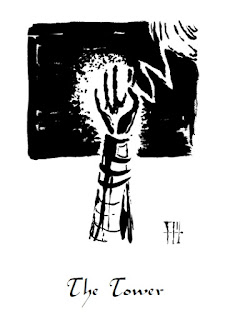 This is a powerful instinctual force emerging from the unconscious, stronger than the will's efforts to repress it, collapse of old forms, inner and outer structure, of false or outgrown values, masks, costumes in a play to impress the audience, structures we build in the outside world to embody our incomplete selves. The tower represents achievement, authority and protection is now in a state of breakdown and dissolution. Let go of fear and the survival instinct to face the unknown implies the fall, ruin, punishment and loss, imprisonment and danger. But it also means freedom from stagnation and restriction - a spiritual healing force. This break-through will result in changes occurring in outer life.

Not only does the Tower seem to indicate a location, but also the “collapse of old forms” and the emergence of new.
I could turn to the Loom of Fate, but I have a pretty clear idea in my head. The robbers have gathered in a ruined building on the outskirts of town. Some have been working to replicate the effects of the transformation, others have been doing general research and information gathering. There’s a bit of a split between committing to the experiment vs just keep robbing with the alien tech. When Dominic shows up, he tilts the balance. He not only wants payback for Scarlet Wing, but the rest now think that they’re about to be discovered anyway. They decide to move forward with the experiment. By the time Metal Angel shows up, the transformation will be complete.
Now, I turn back to the Loom of Fate to help me work out some details.

I turn to the Heroes Unlimited GM’s Guide to round out the villainous crew.
To make things easier, I decide that the three non-transformed villains use the same stats.

There are five left who underwent the experiment. To make things easier, I decide that they will have a 50% chance of either developing 1 Major and 1 Minor Superpower, or 4 Minor Powers. I decide that two of them are “enforcers”

Next up is Dominic. For him, I use the “Driver” base.

Then we have the “safecracker.”

I feel like this is going to be a short fight…