As I discussed in my last post, for SGAM this year I wanted to do something more upbeat and hopeful than some of my other Actual Plays, and I've decided to go with a superhero game. Specifically, Palladium's Heroes Unlimited game. One of the great features of Palladium's games for a Solo player is how well them embrace randomness and uncertainty, which is something I plan to exploit for this game.

But, before I begin, there are three rules I want to put into place:

Step 1 is to determine attributes. Palladium has 8 different attributes, and they are determined by rolling 3d6. However, over the years I've become unsatisfied with the results of these rolls, and instead for all my games (not just Palladium, but also games like Dungeons & Dragons or Pendragon) I change the roll to 2d6+6. It creates slightly "better"  characters (with an average of 13 rather than 10), but it cuts out the absurdly low results. An 8 is playable, while a 5 can just be disruptive. So, I'll be rolling 2d6+6 for each attribute. Also, per Palladium, if any attribute is a 16 or higher, you can roll again and add an additional d6 to the total. Here are my results:

Ok, my character is far stronger and more agile than most people. His other attributes are on the high side, but not enough to warrant anything special. The physical attributes can also be improved later, through the selection of physical skills.

Step 2 is to determine Hit Points and SDC. In Heroes Unlimited, SDC is a general toughness a character has, and a Superhero can take a lot of punishment and shake it off without ill-effect.  Hit Points represent more dangerous levels of damage, as the character comes close to death. I generally assume most characters will flee or surrender if they start taking Hit Point damage. But, these values will change radically based on later rolls; Hit Points are derived from your P.E. attribute, and this might be increase with skills. Also, may skills and superpower add or change your SDC. As such, I'll skip this step for now.

Step 3 is to determine superpowers. This is the fun part. I'm going to roll on a table and see what kind of hero this character will be. Since a lot of these are "non-superpower" categories, I might need to roll more than once. First roll is a 13, which translates to "Robotics." Nope, I don't want to play an Iron Man character. I reroll and get an 03, for "Experiment." Excellent--Experiment characters get Superpowers. And some odd side effects, too. There's a couple of tables I roll against and get the following results:

A) Nature of Experiment: 78. Exposure to unknown quantity, the exact cause may never be determined.
B) Type of Experiment: 31. Accident; the manifestation of super abilities is completely unexpected.
C) Number of Super Abilities: 27. One Major and One Minor.
D) Side Effects: 45. Must Physically Transform when power are used. Add 1 foot to height and 60 lbs to weight. On the plus side, character gains 60 SDC and +10 to Strength. Also, skin color changes to (43 Bluish White)
E) Sponsoring Organization: 36. Medical Research Facility.
F) Status with Organization: 05. Allowed to leave on good terms. Friendly relationship.

Now we determine what his super powers are. With only one Major and one Minor, we will have a limited set of powers, but they can still be pretty impressive. 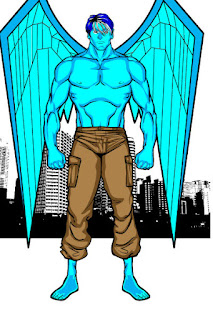 I decide that his Metal form power is tied to the forced transformation. He has to transform into his full metal form to use any of his abilities, including his wings. On the plus side, this makes a secret identity a bit easier--he's a full foot taller, and made of bluish white metal, and has wings. No one would confuse the civilian for the hero!

Step 4 is to determine skills. I roll a 13 and get High School Graduate. This provides him with two "Skill Programs" and 10 Secondary Skills. I'll worry about this once I figure out his history.

Step 5 is Alignment. This is easy, he's going to be Principled. He values others, always keeps his word, never lies, and never harm an innocent.

Step 6 is filling the character our. Basic equipment, cash on hand, that sort of thing. There are also some optional tables I can roll on and get the following information.
For a name, I decide on Cole Smith. A good, comic book style name that is generic, but also plays on his powers. He tries to call himself Seker, after the Egyptian eagle-headed god of metalworking, but to most he's just the METAL ANGEL.

Finally,  I want to work out his background. For this, I turn to +Zach Best's BOLD system.

The defining moment of his childhood was a Fixated Disappearance Overcome by Faction Intervention.

I decide that he and his siblings were kidnapped one night. In fact, a large number of other childer were as well, as a mad super-villain Doctor Nightmare had taken them to use their dreams to power a doomsday weapon. Fortunately, the Sentinels of Justice saved them, and Cole began dreaming of being a hero himself one day. In fact, he began obsessively preparing for such a day, and so I decide his two Skill Programs are Physical and Investigator.

I assume the defining moment of his teens is related to how he got his powers, and what brought him to the Medical Facility in the first place. I roll and get Brusque Mooks Overcome by Fate.

A team of ruthless bank robbers using bizarre high tech weapons hit the town bank, while Cole happened to be there. He was injured protecting his family, which led him to the procedure that changed him.

For his first big outing as a hero, Cole was able to use his powers  to provide the evidence the police needed to arrest the bank robbers. Of course, the robbers tried to flee and provoked a fire-fight with the cops, but his metal form allowed him to bring them to justice and to save lives!

I decide that after the experiment, Cole made his way to the nearby big city of Eagle Harbor, with the dream of being a big hero. He's had a few successes so far, but is struggling in his personal life. With no college degree, marketable skills, or contacts, he's drifted from one entry-level service job to another. His double life makes keep a job difficult, but he's currently working as a barista at a local coffee shop. He lives with a room mate, Scott, who of course has no idea his friend is the new hero.

Cole's real passion is to be a reporter, but times are tough. Instead of working at the Eagle Gazette, he's left with a blog and an active forum presence, trying to expose the criminal elements that threaten his new home.

And with that, we're ready to begin. Here's the full character sheet. 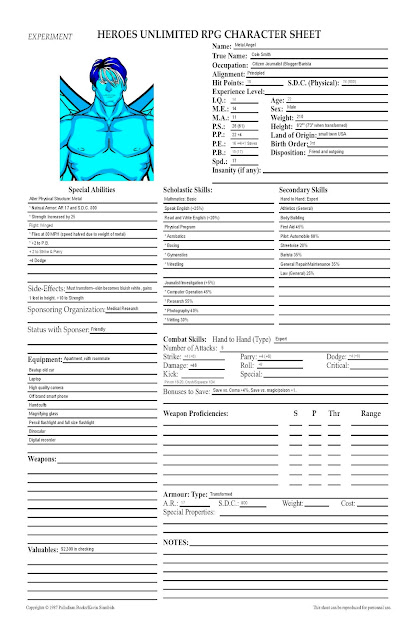