For Deirik, Eirik, Ygvard, and Boldulf, the Summer passes relatively uneventfully. They work as individuals or as a group on their skills and on generating a distribution network for the Fugue, as that seems to be the best road towards amassing greater wealth for them.

In Autumn, come harvest time, Lord Krogan calls the Men into his temple. Usually this means he has a mission for them, and this time is no different. Krogan informs them that there's a town named Rulla within his territory, but fairly close to the border he shares with Torvald the Betrayer, that is due for its harvest tithe to him. Not only has he not received that tithe or any messengers from that town, but the messengers he has sent there himself have not returned. At this point, he's concerned that there's something wrong with Rulla, or at the very least on the road between Rulla and Alucard, and wishes the Men of Mjarn to investigate.

Deirik, Eirik, Ygvard, and Boldulf finally return to Alucard after raiding the East coast of the Sea of Pelluria with loot and casks of Fugue in hand. They bring the loot to Lord Krogan who picks and chooses the items that he wants as his share, and leaves a good amount for the Men of Mjarn and their crew. Krogan also gives his blessing to trading the Fugue in his territory as long as he gets a cut of that as well.

Eirik realizes that to really get the gears turning on the Fugue trade, it's a lot of legwork. He also realizes that there are 12 other crewmen expecting their cut of the loot and 12 casks of Fugue to be distributed. Putting the two together, Eirik and Deirik convince the crew that they can take a cut of the items that they brought back *or* they can each take their own cask of Fugue and earn much more as they establish a customer base and a distribution network of their own. Each of the crew, not afraid of a little extra work, takes a cask and heads off to seek their fortune.

With their boat beached after escaping The Maw of the Pelluria, Eirik takes some time and evaluates the repairs necessary to ensure the rest of their journey doesn't still end at the bottom of the sea. With the damage done, he estimates it will take him around 3 days to repair it. Eirik sets himself to the task while Deirik, Ygvard, and Boldulf help establish a temporary camp with the rest of the crew. 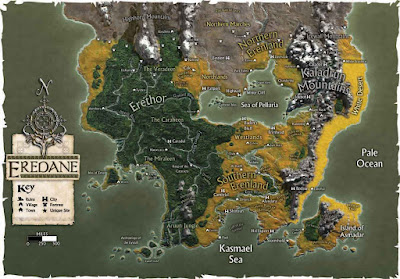 As the harsh Northern Winter abates, Eirik finds that Kiro, the hobgoblin sergeant he's spoken to the most and accompanied him on his recent outing to take down the bandits, has expressed desire to accompany him on his adventures and be his right hand man. Deirik has learned some new skills as a brand new Nephilim (reminder: 3.5 Assassin & Avenging Knife hybrid). Ygvard is a brand new Legate, though his path is not one of true faith and piety in the Shadow but that of a path to power. Boldulf feels more in touch with the wolf inside of him, but feels like he may have lost some humanity in the process.