A new “thing” is going around the Solo Gaming community, the March Module Month or, the Solo-A-Module Month. Basically, a couple of us were all playing modules at the same time (I was playing through B2: Keep on the Borderlands), and suddenly it became a thing. Personally, I blame +Tarcisio Lucas. Anyway, despite time being somewhat tight right now (I won’t forget you, Terry!), it just sounds like too much fun for me to stay away. 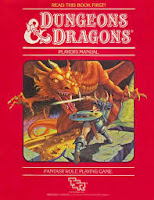 So, here’s how I’m going to be handling this game. First off, the focus of this is to play the damn module and the characters. I’ve done something similar before, with my Alien Hunger play-through. But THAT module I knew backwards and forwards, so the focus was on the narrative and the characters actions, more so than on the module itself. This time, I’m going in cold. Secondly, I want to use this as an excuse to try a game system I have never actually played before--Basic Dungeons and Dragons. Specifically, the Mentzer edition of Basic and Expert (they are the ones I have, so don’t @ me, Moldvay/Cook fans).

Thirdly, I want to minimize the “other tools” I bring to this play through. Solo playing a module is a tricky thing. You either need a good sandbox (Like Alien Hunger for Vampire or X1 for D&D) or you need to do something else to make it work. Otherwise, you get stuck on a railroad and it really just comes down to binary “choose your own adventure” decisions (if you’re lucky) and skill checks. But, at the same time, my play through of B2 was a lot of fun, and used only the most basic of oracles. So, for now my plan is to just use the module, the D&D mechanics, and the CRGE for my game.

Oh, one last thing. Unlike my Vampire playthroughs, I’m really going to try and minimize the narrative/creative writing aspects of this game. I also assume that there is going to be a LOT of combat (it is D&D, after all). Given that, I assume this will be more of a recap, rather than a beat-by-beat game report. Like, when I play Vampire, I am literally posting my rolls on the blog before I even think about what they mean or what might come next.

Ok, enough setup. What module am I going to do?

"YOU DID WHAT?!" Lord Krogan's voice resounds through the Shadow Temple as he reacts to the news Deirik relays that he has murdered his cousin Lianna, sister of Torvald the Betrayer.

Eirik, Ygvard, and Boldulf all stand back from the discussion; they're there to support and watch over Deirik, but are not involving themselves otherwise since it's his news to break.

Deirik begins to respond, "I just..."

Lord Krogan explodes once again "THAT WAS RHETORICAL!" He then brandishes his symbol of Izrador, "I CALL UPON THE MIGHT OF IZRADOR TO COW THIS BEING INTO SUBMISSION!"

With the snow finally having melted enough to allow travel, Deirik, Eirik, Ygvard, and Boldulf once again set their minds to making progress in achieving their goals. However, there is a setback. Deirik, with his skin being more pale, his canine teeth slightly extended, is concerned that there's something genuinely wrong with him. Ygvard runs some magical tests on him and it doesn't take him long to determine that Deirik is, at least partially, Fell. The Men know they can't hide something like this from Lord Krogan, so they take the matter to him.