Boldulf continues his trek towards the goat path along the cliff road. Up ahead, he sees a large contingent of Shadow troops. Well armed and armored orcs as well as a giant oruk make up this force, and Boldulf decides he's better off completely avoiding them. He, therefore, goes off into the patchy forested area North of the cliff road and passes the Shadow troops.

Finally having rested enough that the aches and pains have become only soreness, Deirik, Eirik, Ygvard, and Kiro move to the East amongst the forest. With both Eirik and Boldulf being expert trackers, the entire group meets up and catches up on recent events.

Boldulf asks, "So... the cliff? Did you jump off or get pushed off? What happened there?"

Everyone else stares angrily at Ygvard, who cheerily responds, "We jumped! I used my magic to catch us!"

"Hrmpf, sorry I missed that," Boldulf gruffly replies with a tone dripping in sarcasm.

Deirik chimes in, "So, what'd you see at Kardan?"

Boldulf looks around, "Well, first, keep your eyes peeled. There's a well armed and armored force of troops headed this way, probably looking for us. I doubt they'll see us this well hidden in these trees, but better to be safe. At Kardan, it was't long before a group of 30 men and 30 orcs arrived with what must've been Torvald's apprentice. It didn't look like she was wearing armor, so maybe she only puts it on when she needs it, or she left wherever she was in a hurry. Either way, she had her hood up so I couldn't tell you much more than that. They reinforced the town and increased patrols. I figured it wasn't going to get any more interesting than that so I left."

Deirik nods, "So, Kardan is reinforced, but not with a huge contingent, which means that Svenor is likely still really well manned. OK, let's talk over what we do now."

At that moment, Deirik hears a voice inside his head he immediately recognizes as Torvald's, which says, "Hello Deirik, shame what happened to grandma and your little sister. She'd be what? 19 now? Rhiann must be an unlucky name."

Eirik squints in anger but otherwise does not respond. However, Deirik lets his hatred get the best of him and erupts in curses and threatens to murder Torvald in the most painful way possible, then turns to the group who are all staring at him confusedly, "Torvald just contacted me mentally. I couldn't help myself but respond with what he said, but I'm sure he knows I'm alive now."

Eirik nods, "I got the same message, though I didn't respond, so maybe he doesn't know about me yet."

Ygvard chimes in, "If it's the spell I'm thinking of, he knows either way. Which means he knows for certain you two are both alive if he had any doubts before, and it's fair to assume he knows we're the ones out here causing trouble near his temple. We should probably leave."

Eirik rolls his eyes, "So you're saying I could've cursed at him too? Damnit, I thought I was leaving him guessing by not responding! Oh, and yeah, I think we should leave too."

The group discusses their options and after weighing them all decides on stealing a boat and making their way to Baden's Bluff to try and link up with Deirik's mentor and lover, Lyra, and learn more about the assassin responsible for Rulla. They all strategically avoid the large orc force sent to attack them and head East to a river town where they steal a river boat. They head for the same river town where they'd previously faced inspection, and where Deirik had first attempted to assassinate Torvald, since they are familiar with it and its layout.

Once they arrive at the town, Deirik, Eirik, and Boldulf infiltrate it and make their way towards the docks. Ygvard, Sergei, and Kiro head a bit South (downriver) from town to be picked up. A few dead guards and dockmaster later, the men have stolen the best boat available to them. According to Eirik, who is the most skilled amongst the Men at seamanship, this boat is meant for river travel and will be difficult with which to travel the open sea. Difficult, but not impossible, and Eirik is confident he can make it happen. Deirik, knowing his brother as well as he does, can sense that Eirik is not as confident as he's letting on, but figures "no guts, no glory" and goes with the plan. 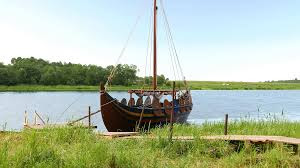 Eirik skillfully navigates the Be'neeya, and picks up Ygvard, Kiro, and Sergei. Then makes it the rest of the way to the Sea of Pelluria. Not long after entering the sea though, a swift current hits the boat and starts pushing the rudder. At the same time, the wind flows in from the North and blasts the little river boat. Eirik is a professional, but sometimes the situation is too much even for the best. It's all Eirik can do to keep the boat from breaking up or toppling as he steers it straight for the closest of the Corbron Isles, home of the Pirate Princes.

The boat has taken significant damage as it fought the wind and current, and even more as it hit the rocky shores of this island. It will take several days of Eirik using his skills at craftsmanship and Ygvard using his magic to repair the boards to make it seaworthy again. Over the next three days that work is ongoing while Boldulf scouts around the island and comes to the understanding that it's fairly barren. Sea birds make their nests here, but little else in the way of flora or fauna.

On the third night, Deirik hears some noise off to the South. Luckily, the Men are beached on the North side of the island, but Deirik still goes to investigate. He reaches a vantage point in just enough time to see a small pirate frigate traveling through the channel of water between this one and the next island to the South. "Good to know," Deirik mutters to himself as he slinks back to the others.

The morning of the 5th day as the men are continuing their work, they spot a ship off in the distance approaching from the West. As it continues getting closer, they identify it as a Shadow Troop Transport - likely filled with orcs, hobgoblins, goblins, and a legate or two. Ygvard tells everyone come over to the boat, he's going to create the illusion of a rocky shore where they are and hope that's enough to fool the Transport. Unfortunately, within minutes of Ygvard casting his spell, the Transport starts veering in their direction and makes its way directly towards them.

Luckily, it's not too long before Deirik hears a familiar sound to the South. The speedy pirate frigate glides out from behind their island! From the Eastern side of their island another ship appears and turns to cruise past the Men, a pirate warship armed with a ballista! Some of the pirates on the warship point to the rocky shore where the Men are hidden as they sail past. Obviously they see something there they're not used to seeing, but they have no time to deal with that now as they and the frigate close on the troop transport.

The clanking of metal as the ballista is armed, the "KER-CHUNK" of the bolt flying through the air and tearing into the Transport, arrows flying from the frigate to decimate the troops onboard - the two Pirate vessels make short work of the Troop Transport which is soon making its way to the bottom of the Pelluria. The warship appears to pluck a human out of the water before slowly coming about and... heading straight for the island the Men are on.

Deirik quietly says, "Here they come, we need to hide your armor! Oh, and get rid of this cat!" motioning towards Ygvard's astirax, Jaga. The Men quickly go about hiding all signs that they have a Legate amongst them, and Ygvard tells Jaga to go hide on the island. Jaga squints its eyes, but complies and stealthily goes further onto the island.  Once Jaga is clear, Ygvard drops the illusion. They hear a clanking of metal and a "KER-CHUNK" once more! The Men dive for cover as a ballista bolt destroys the boat the Men were working to repair. The warship anchors offshore and sends a few skiffs toward the island, all armed with bows and arrows.

One of the men on the skiffs yells out, "Ho there! Who're you and what're you doin' on our island?"

Deirik steps forward, "We're friends! Our boat got pushed out to sea," he motions towards the splinters of wood surrounding him, "and got damaged, so we stopped here to make repairs."

The Pirate replies, "Friends, eh? Anyone would claim to be friends with 20 arrows aimed at them."

Deirik replies, "Aye, but we really are. I'm Deirik Yakobson of Clan Mjarn, the previous Captain of the Brunhilda which I took over from my father, Yakob Halderson. We all knew Captain Duryn of your ranks and worked well together over the years to keep supplies flowing to those that needed it."

The Pirates lower their weapons, "Well, Deirik Yakobson, we'll see soon enough if you are true friends of the Princes. Not many of our friends would be traveling with a hobgoblin." The pirate points towards Kiro, whom Deirik had forgotten about until that moment. "So until we know the truth of the matter..." some of the other pirates throw manacles from their skiffs onto the shore.

The Men place the manacles on each other and Boldulf helps to tie up Sergei - to keep him calm so he doesn't attack any of these pirates, and to keep the pirates from murdering his lupine ally. Shortly thereafter, they're all taken aboard the warship and roughly thrown into the brig - especially Kiro, who comes away with several extra cuts and bruises. Across the way, in a separate cage, lies a bound and gagged legate - obviously the same human they'd pulled from the water after the recent battle.

Eirik checks on Kiro to make sure he didn't suffer any major injuries, then takes in the surroundings and sighs, "Well, here we are."

Players Commentary: This was one of the very few sessions I missed, and so I take no personal responsibility for anything that happens there. I certainly would never have wrecked the damn ship!

Though, actually, the shipwreck, inadvertently, is the point of the game where the game begins to pivot to something different.
at October 23, 2018